Adder bad day? Chloe the Yorkshire terrier gets bitten by a SNAKE to leave the poor pet with a massively swollen head

An adorable dog was left fighting for her life after she was bitten by an adder.

Chloe, a tiny Yorkshire terrier, suffered such swelling and bruising that her owners were unable to recognise her after the attack.

Her head ballooned to twice its normal size, with huge black bruising eclipsing her face. 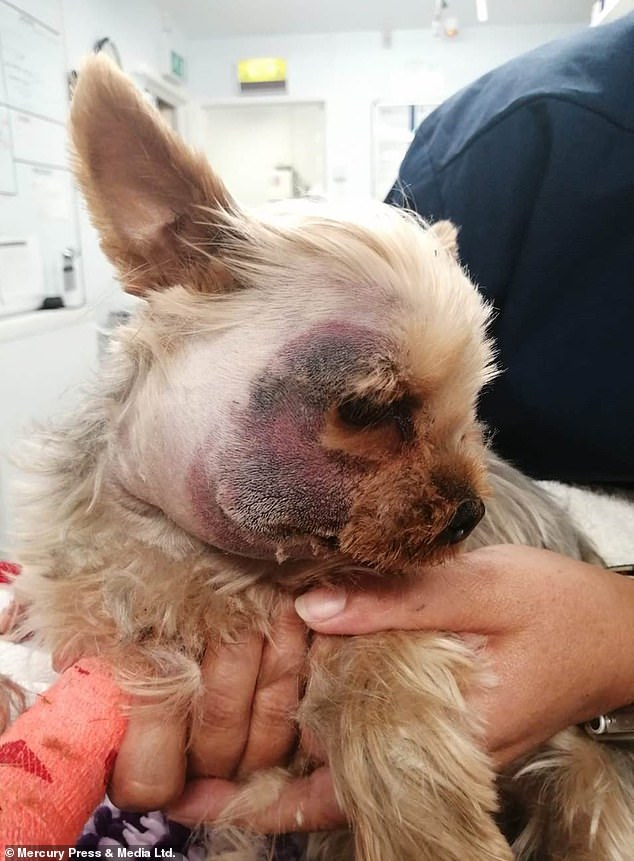 Graphic images detail the horrifying extent of Chloe’s injuries, where the swelling caused her eyes to completely disappear, and she could barely open her mouth to breathe.

Luckily, the poor pup has now recovered after emergency care from vets, who administered antivenom serum to save her life – and owners Ray, 74, and Denise Peck, 73, can breathe a sigh of relief.

And Chloe’s return to health is partly due to the tender loving care she got from her owners’ other dog, Lily, a red setter who is about a tenth of her size. 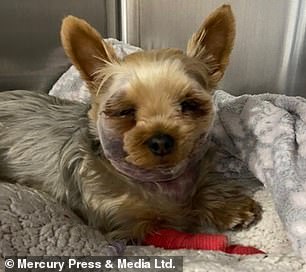 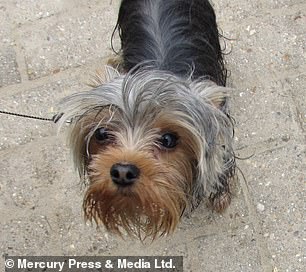 Retired service engineer Ray, from Epsom, Surrey, said: ‘We felt sick when we first found out that Chloe had been bitten by a snake and it was terrifying.

‘It happened quickly but the injuries showed up slowly – she looked completely unrecognisable from what she usually looks like.

‘Her face was so swollen and it looked like a balloon. 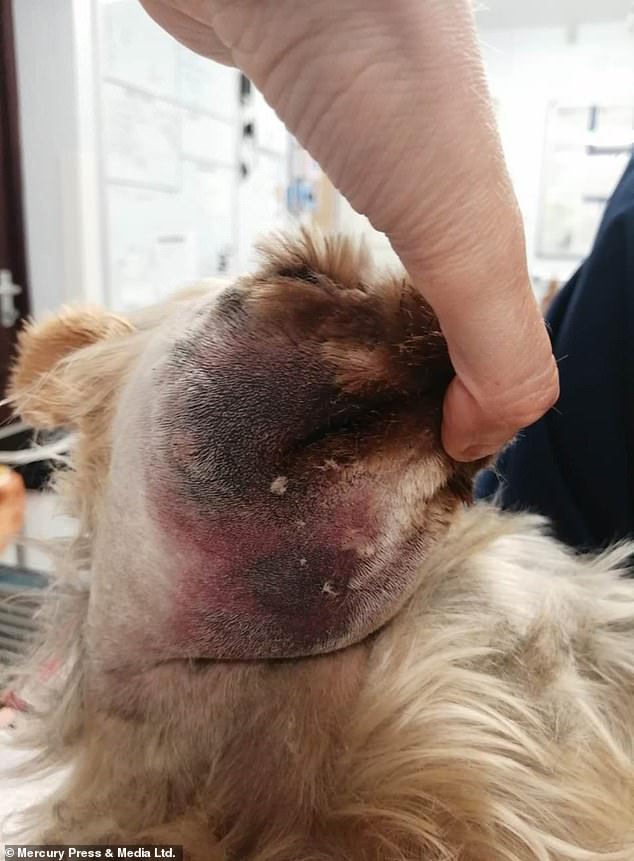 This grim image shows the extent of Chloe’s injuries, where the swelling caused her eyes to completely disappear and she could barely open her mouth to breathe

‘We’re so relieved that she’s now back to normal and it was nice to see our other dog, Lily, making a fuss of Chloe and cuddling

‘The staff at Vets Now did a brilliant job of looking after Chloe – and Lily definitely helped out afterwards!

‘They’re two totally different dogs – one little, one large – but Lily could tell something was wrong and really mothered her when she came home.’ 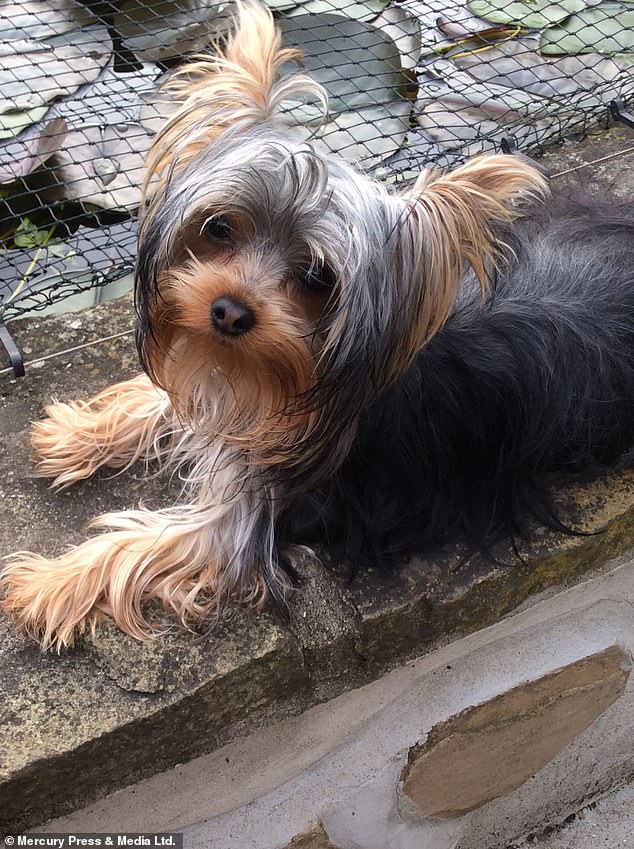 The snake drama began when Ray and wife Denise, a retired admin assistant, were staying at a holiday house in Studland on the Dorset coast, where adders are such a regular feature that there are signs up warning of their presence.

Chloe was playing with Lily in the garden when suddenly she came back into the house visibly distressed and beginning to swell – followed by Lily, who seemed to sense something was badly wrong.

Initially, Ray and Denise thought Chloe, who is four years old and weighs just three kilos, had been stung by a wasp. 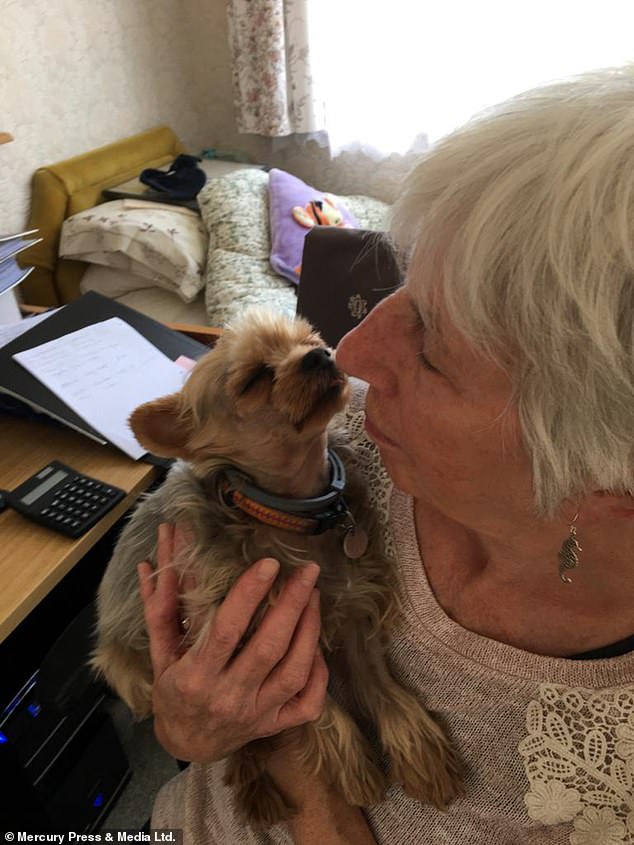 But Ray said: ‘We soon realised it was much worse than a wasp bite as her head was getting bigger by the minute.

‘We’ve stayed in the house before and we saw an adder in the garden last year so we realised very quickly what had happened. It’s pretty much adder central down there.

‘The garden had just been cut back and we think the adder may have been dislodged while that work was going on.’

Adders – the UK’s only poisonous snake – only attack if they are trodden on or disturbed by an inquisitive creature like playful Chloe.

Ray and Denise rushed Chloe to the Vets Now pet emergency clinic in Bournemouth, where vets explained that, given the severity of her symptoms, Chloe may benefit from anti-venom. 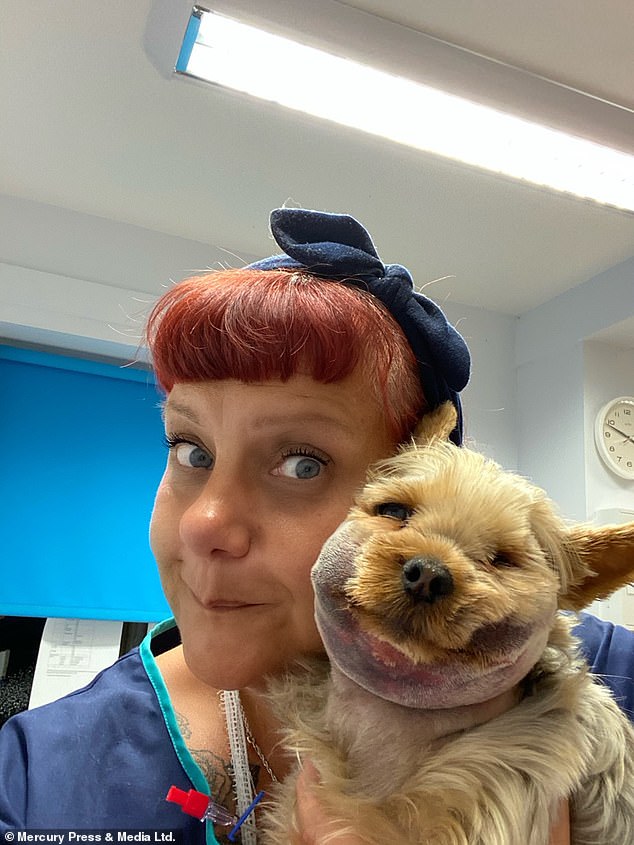 Chloe was in safe hands with senior nurses at the Vets Now pet emergency clinic in Bournemouth, Dorset, who administered anti-venom which saved her life

Catherine Rose, a senior nurse, said: ‘In a very small number of cases, anti-venom can lead to anaphylactic seizure, which we had to talk Ray and Denise through.

‘After weighing up the risks against the benefits, Ray and Denise gave us their permission to go ahead while also providing supportive treatment.

‘If we hadn’t given the anti-venom then there was a chance Chloe wouldn’t have made it through, partly because she is just so little and the bite was so severe.’

After three days, Chloe was well enough to go back home with Ray, Denise and Lily.

Ray said: ‘Poor Chloe didn’t look great – her face was still black from the bruise and her fur was all shaved off so the vets could check the spot where she’d actually been bitten. It looked like the worst kind of lockdown haircut!

‘But it was great to have her home and we knew she was on the mend when she was back to licking Denise on the nose. 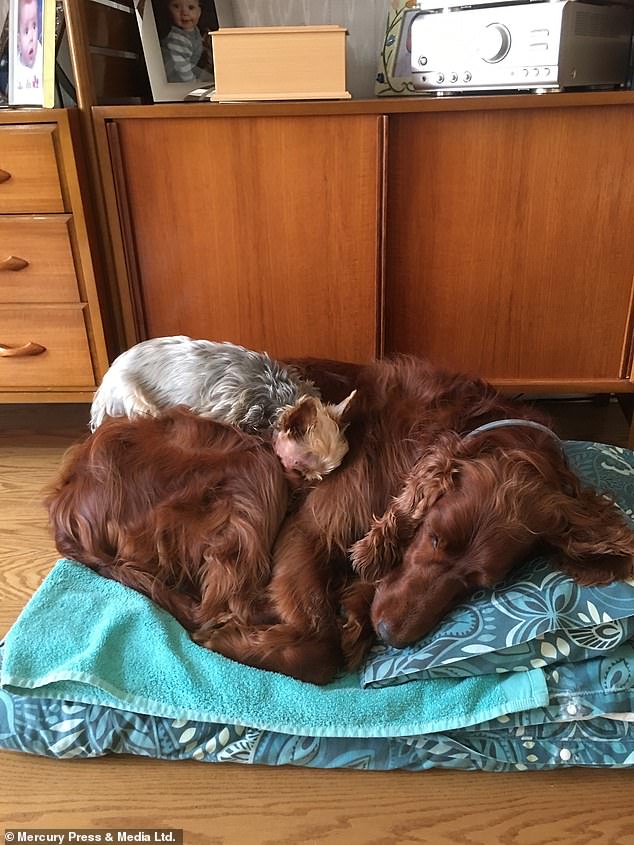 Best pals: Chloe is making a speedy recovery thanks to the tender loving care she is receiving from Ray and Denise’s other dog, Lily, a red setter who is about a tenth of her size

‘Then she wolfed down a dinner of chicken fillets after being totally off her food and we knew everything was fine. Lily played her part too, which was a really nice end to the story.’

Catherine added: ‘Chloe was a real favourite with all the staff at the clinic. She was so loveable and affectionate.

‘Adder attacks are relatively rare but we do see them and, in Chloe’s case, it was very severe indeed, life-threatening in fact.

‘We’re just coming to the end now of the peak period for adder bites but owners need to stay vigilant for them.

‘If you think your dog may have been bitten by an adder, then do what Ray and Denise did and seek emergency help straight away – please don’t delay as every minute is crucial in these cases.’