The UN special envoy for Yemen urges government and Houthi representatives to work for the future of war-torn nation.

Rimbo, Sweden – The UN’s special envoy has appealed to Yemen’s warring sides to “act now” for the future of the country, as representatives from the government and Houthi rebels gathered for UN-sponsored peace talks in Sweden.

“Yemen’s future is in the hands of those in this room,” Martin Griffiths, the UN special envoy for Yemen said on Thursday in opening remarks at talks aimed at ending more than three years of war.

“We must act now before we lose control of the future of Yemen,” he said.

“Both parties have called for a de-escalation, which is an important backdrop to these talks. This is a show of serious intent.”

For only the second time since the conflict began, officials from President Abd-Rabbu Mansour Hadi’s government and representatives from the Houthi rebel movement joined the talks aimed at discussing ways to end the fighting that has killed an estimated 56,000 people and left a staggering 22 million needing humanitarian assistance.

The UN special envoy is seeking to introduce a set of confidence-building measures at the talks in Rimbo, a town around 50km north of the Swedish capital Stockholm, that will eventually pave the way for future negotiations.

“I am also pleased to announce the signing of an agreement on prisoners, those that have been forcibly detained,” Griffiths said.

“It will allow thousands of families to be reunited.

“What will we do here and in the coming weeks is to work on the implementation of this.”

While the warring sides will not meet face-to-face, the confidence-building measures may include negotiating a ceasefire in the port city of Hodeidah, large-scale prisoner swaps, the reopening of Sanaa international airport and the payment of salaries to civil servants in Houthi-held areas.

Swedish Foreign Minister Margot Wallstrom said the talks can be “an important beginning”.

“It is up to you, the warring parties, to engage in constructive talks with each other and Martin [Griffiths]. What is needed are concessions, compromises and courage,” she said.

But Yemen Foreign Minister Khaled al-Yamani gave little indication that he was going to offer concessions to his rivals.

He rejected a Houthi proposal to form a presidential council without President Hadi as “nonsense”.

“They should withdraw from the institutions of the state and hand them back to the legitimate government. Other than that, there will be no peace,” he told Al Jazeera.

“They should respect the will of the international community and surrender their arms and ammunition and missiles.

“Other than that, there will be no settlement, no solution.”

Abdul Malik al-Ajri, a member of the Houthi delegation, told Al Jazeera that the rebels were hoping the consultations would eventually lead to an “inclusive political dialogue”.

“We are hoping these negotiations will help end the war,” al-Ajri said.

On Tuesday, Ethiopia’s Prime Minister Abiy Ahmed urged the rival sides to embrace dialogue, saying the war had only brought destruction to Yemenis.

“You should agree and disagree without bloodshed and wars as the people of one home,” Ahmed said in a statement.

“Plan your growth and progress, and keep up with the civilisation that you were once at the forefront of.”

Yemen has been torn apart by conflict since 2014, when Houthi rebels, allied with troops loyal to former President Ali Abdullah Saleh, captured large expanses of the country, including the capital Sanaa.

Saudi Arabia led a coalition that launched a massive aerial campaign against the rebels in March 2015, aimed at restoring the Hadi’s government.

Since then, the US has been helping the coalition, which now primarily consists of Saudi Arabia and the UAE, with weaponry and logistical support.

Until recently, Washington was also refuelling the alliance’s planes, which were responsible for the more than 18,000 raids carried out on the country.

According to the Yemen Data Project, almost one-third of all of those bombing missions struck non-military sites.

Residents in the Yemeni capital urged the warring sides to put aside their differences, saying the country had reached a precipice and “Yemenis could no longer wait”.

Hamid Sharaf Ali, a school security guard, told Al Jazeera: “The warring parties need to put aside their partisan and personal gains and seek good for Yemen and the Yemeni people.” 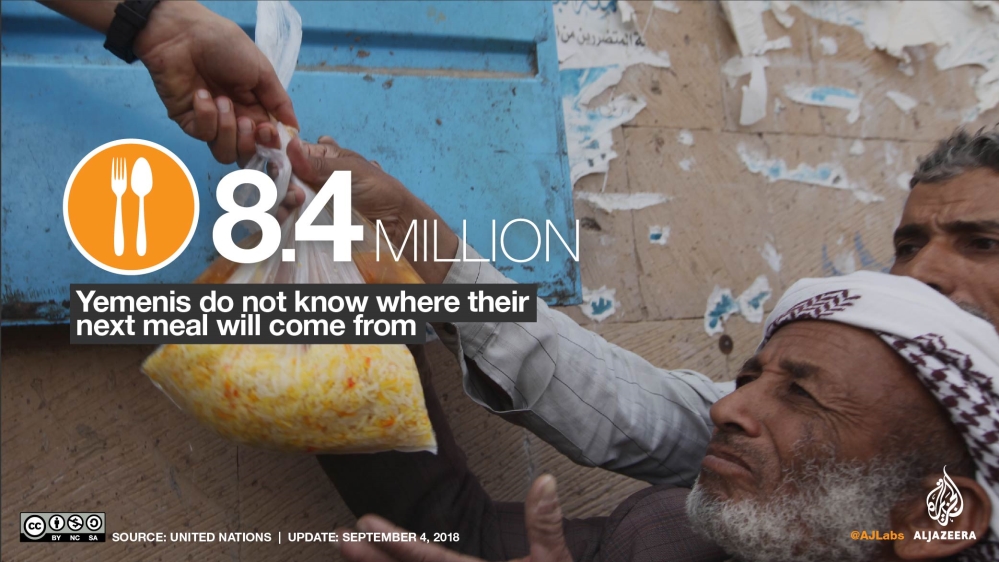