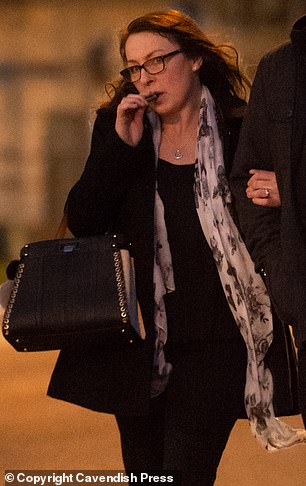 A grieving daughter who fat-shamed her brother’s girlfriend, slapped her in the face and vandalised her Mercedes during a family feud has been ordered to pay her £775 in compensation.

Claire Oldfield got drunk and drove to her brother John Friel’s home in Cheshire before banging on his front door and demanding money she believed she was owed after paying over £10,000 for their father’s funeral.

Mr Friel was not at home but his partner Keeley Murphy, a former school assistant, opened the door in her pyjamas to try to calm Oldfield only to be branded ‘fat and podgy’ before being punched in the face.

Oldfield, 46, also fat-shamed Miss Murphy’s children as they looked out of a bedroom window before she scratched the victim’s Mercedes CLA 180 car with a key.

Oldfield, who lives in the village of Gawsworth and who cares full-time for her adult sister who suffers with cerebral palsy, was later arrested but claimed she ‘hadn’t done it’ and that her brother’s girlfriend had ‘attacked’ her.

She admitted calling Miss Murphy ‘fat’ but insisted there was a catfight between the two women adding: ‘There’s a dispute going on over the money which I paid for my dad’s funeral.

‘I went round to my brother’s house to tell them I wanted my money as the funeral cost £10,500 – they owe me money for it but they’re refusing to pay. She answered the door and told me my brother wasn’t in and I told her I wanted my money – but she told me: ‘I wasn’t f****** getting it’ and there was a shouting match.’

A breath test showed she was two and a half times the alcohol limit for driving.

At Stockport Magistrates Court, Oldfield who was convicted of assault, criminal damage and drink driving was also ordered to wear an electronic tag for 10 weeks and was banned from contacting Miss Murphy for 12 months under the terms of a restraining order. 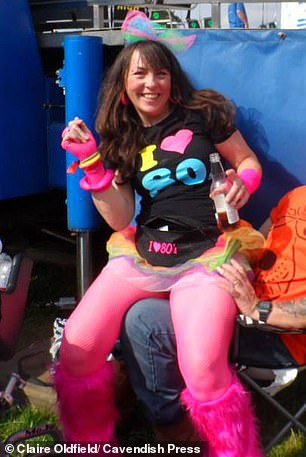 She was also banned from driving for 14 months and ordered to pay £100 costs.

It was also ruled that £700 of the compensation bill should go towards the £1,500 repairs on the Mercerdes.

The violent confrontation on July 28 last year occurred after a bitter family feud between Oldfield and Mr Friel following the death of their businessman father, Carl Friel, who passed away aged 75 in 2015 after making separate wills in Ireland and the UK.

Oldfield had believed she was executor of her father’s will and paid for his funeral in the hope of reclaiming the money from his estate but she subsequently discovered her brother was in charge of discharging the money, the court heard.

After consulting lawyers, she drank vodka and red bulls at home then went round in her VW Carravelle people carrier to have it out with her brother.

Miss Murphy a mother-of-three who was at home at Congleton with her children said: ‘I heard banging at my door and Claire Oldfield who’s sort of my sister-in-law was stood there and saying: ‘I want my f****** money’. It was my understanding Claire wanted the money from her father’s estate and John is the executor.

Miss Murphy said she insisted that the situation had nothing to do with her, but that Oldfield started to ‘verbally abuse her and her appearance’.

‘She called me ‘fat’ and ‘podgy’ and my daughter came into the porch and she was calling her ‘fat’ too. She was drunk, she was irate and she was laughing as if it was a joke. She was very loud. I could tell she was drunk by the way she was walking up and down the drive.’

After being insulted, Miss Murphy told Oldfield to go away and shut the door, before calling police.

‘Then a neighbour came and knocked on the door and I got changed out of my pyjamas to go outside and Claire was there again. She was ranting and raving then she hit me in the face with the palm of her hand.

‘She was asking me where her ‘rapist brother’ was. She was shouting up at the girls – they were upstairs at the front bedroom window. She was calling them both ‘fat’ and they were telling her to go away. She then hit me in the face with her left hand, hitting me on my top lip and my nose. She then grabbed my left arm and I went to grab the inside door of the porch and she hit me in the face.

‘She was very aggressive with me and my children and yet I was not aware she was owed money. I was just in total shock when it happened at the way she had behaved.’

Oldfield denied assault and criminal damage. Her lawyer Shirley Fitton said: ‘This all started over inheritance. The father had apparently made two wills one in Ireland and one in this country and it caused conflict. There is an ongoing dispute and Mrs Oldfield feels that that dispute has been very vindictive against her.

‘She cares for her disabled sister who suffers with cerebral palsy and has done so for over 25 years. Yet she was charged with fraud in relation to the inheritance following a complaint from her brother and was taken to crown court but was found not guilty of that

‘Since these proceedings they have applied for the power of attorney that she has in relation to her sister’s affairs to be transferred to them. It is a very fraught situation.’