THIS is the moment Covid cops stopped a woman just two miles from her home as she was queuing to buy a coffee.

The woman, who posted footage of the incident on social media, claims she was slapped in handcuffs with her arms behind her back after she was spoken to by four uniformed officers in masks. 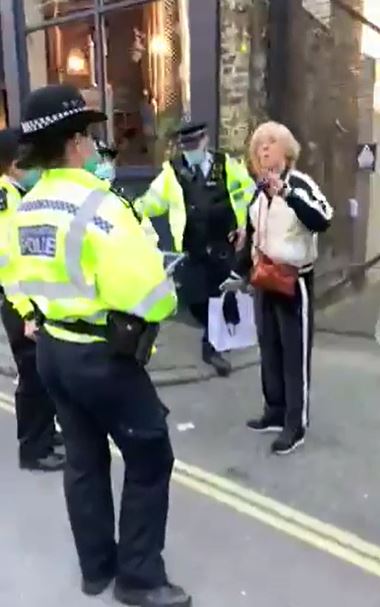 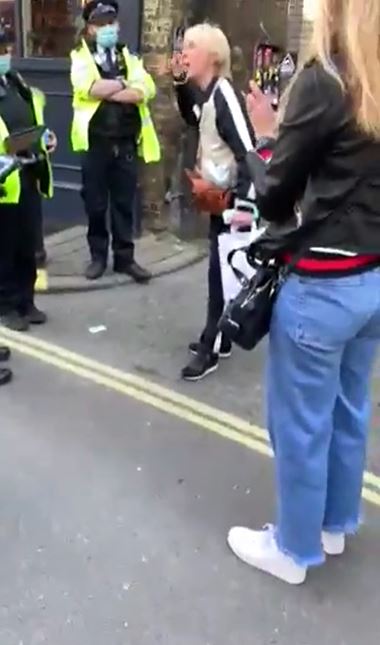 The video shows her telling the PCs she lives in Battersea, and had joined a friend and the pal's son, 13, for a walk.

"It's not a crime to stand in a street," she said.

One of the officers responds: "We've explained it to you – it's not legal to come from Battersea."

But as he attempted to continue, the woman shouted: "Two miles away. It's just the other side of the river."

Her pal then says: "It's completely unreasonable."

The friend then turns to passers-by and says: "Everyone, if you don't live in the area, you're not allowed to be here.

"It's against the law. I come from Battersea, two miles away, and they're saying I can't be here.

"This is the state of the law, and this country."

In the meantime, the woman tells cops: "Why don't you go and arrest people for knife crime?"

The woman later posted the footage on Twitter username @Floss321, and claimed she'd been handcuffed during the row. 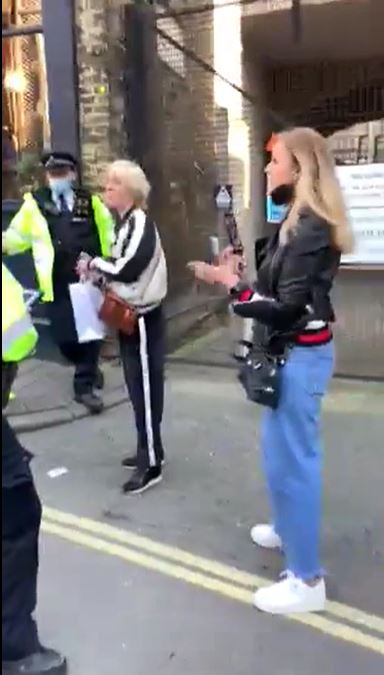 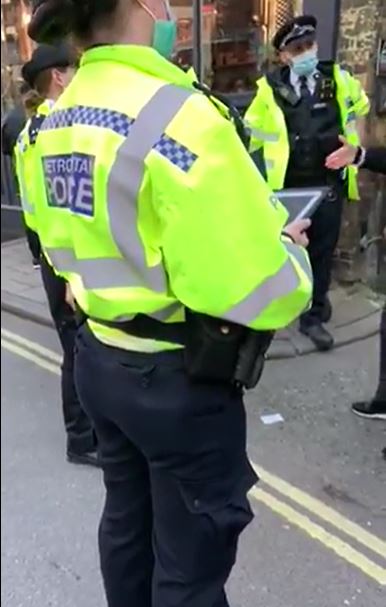 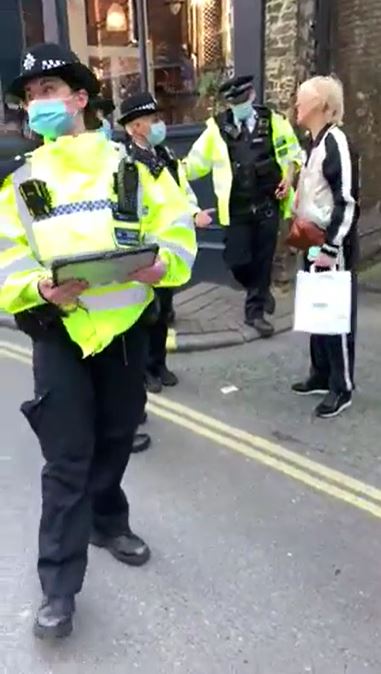 "Just been cuffed and had my arm twisted up my back for queuing outside trying to buy a coffee with my BF and her 13-year-old son," she said.

The post has since gone viral, prompting dozens of replies – with many divided on whether she or the police were in the right.

Under the current national lockdown, people living in England have been ordered to stay at home.

People can leave for just a few essential reasons, including to shop for necessities, if they can't work from home or for exercise.

Strict rules are also in place for exercise. Brits are allowed to meet one person from another household outside.

Sitting on a bench to drink a coffee is banned, as are picnics, and friends must stay two metres apart.

According to the Government's guidelines, people must stay in their local area unless for an essential reason, like work. However, officials aren't specific on what counts as 'local'.

What do police chiefs say about the video?

Met Police officials have said “now is not the time for complacency”. In a statement, they told Sun Online:

"We are aware of a video circulating on social media which captures part of officers’ interaction with members of the public.

"Enquiries are ongoing to establish the events and outcome.

"While the Government’s roadmap contains positive news, the Met's message is clear – now is not the time for complacency.

"Throughout the city, Londoners must continue to stick to the rules which are fundamentally there to save lives.

"That means you must stay at home wherever possible. You should not be meeting with other households unless a support bubble is in place or you are meeting one other person for exercise.

"Officers across London will continue to take action against rule breakers, adopting the 'Four Es' process of engaging, explaining, encouraging and then enforcing."

One of those to reply asked why it took so many officers to "pick on one woman outside a coffee shop", adding: "Ridiculous."

Another said: "So sorry you went through this. You could never imagine this a year ago."

And a third said: "The damage that has occurred to the relationship between the police and those they were set up to protect is now almost certainly irreparable."

However, others disagreed – and said they believe the woman in the video was flouting lockdown rules.

"To be fair, two miles isn’t exactly local. Why not make yourself a coffee at home and go for a walk around your block?" one asked.

Another said: "Funny how often the people who are arguing against all the restrictions just happen to randomly get arrested and then start filming after the initial confrontation isn't it?

"Almost a year of this and I don't know a single normal person who's been arrested or fined."

Cops trying to keep on top of the Covid legislation have faced criticism over some of their actions.

Earlier this month, dad Zia Khan was confronted by police as he smoked in his car during a "five-minute breather from the kids" in Birmingham.

West Mids Police chiefs refused to apologise for the stop – although weeks earlier, the same force was forced to apologise when one of its officers threatened to arrest a man on his way to work.

Video taken by Nino Romano, 21, shows two officers in a car pulling him over in Solihull.

But the situation quickly escalated when he refused to give his ID – leading to one of officers calling him an "idiot" and threatening to take him into custody.

After the video circulated on social media, the force began an investigation and later apologised for the officer’s conduct which “fell far below what we would expect”.

And in January, two pals were fined £200 after driving five miles for a socially-distanced walk.

Jessica Allen and Eliza Moore were surrounded by police officers at Foremark Reservoir in Derbyshire.

The force later apologise and retracted the fixed penalty notices.