This is the shocking moment an angry driver rips of another motorist’s side mirror, throws it onto the road and walks off.

Ymani Breedlove filmed the incident which happened in October as she was driving in Richmond, Virginia, with her 18-month-old daughter and sister.

At the start of the footage a woman, who is on the phone and wearing black, can be seen walking towards the camera. 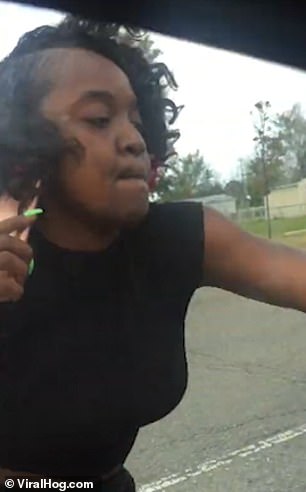 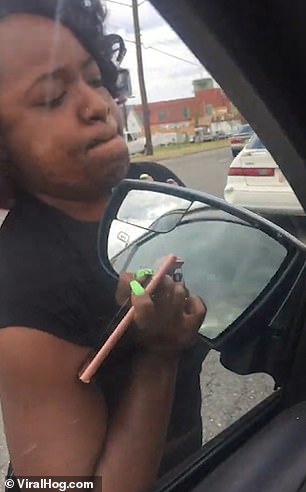 The angry woman walks over to the car (left) on her phone , grabs the side mirror and begins to pull (right) on it during the incident in Richmond, Virginia

She tries to open the car door but it is locked so she hits the side mirror instead. She then grabs the mirror with both hands and starts to pull.

When the mirror comes off the car the woman throws it into the road and it breaks as it hits the tarmac.

The women inside the car can be heard saying ‘oh my gosh’ but staying calm as the irate woman walks back towards her own white vehicle.

One woman says: ‘She took the whole thing off my car. Oh my gosh, she really just did that to my car.’

The woman then drives away as the camera is still recording and the other women are left in shock. 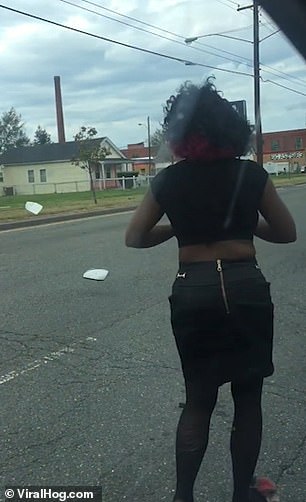 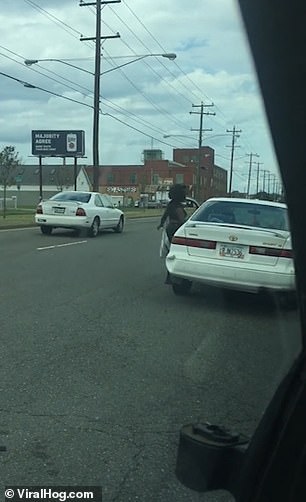 Ms Breedlove told nbc12: ‘As a mom, I was freaking out. She literally took it out and you can see there’s wires in it.’

She said the incident started when the woman was dodging potholes and came into the lane they were in.

She said: ‘We proceeded to pull over and that’s when the chaos started. I did not have any contact with this woman or speak with her, I immediately called the police.

‘The result of me not getting out of the car was that she proceeded to rip the left side mirror off of the car and threw it in the middle of the road with ongoing traffic.’