London: World No. 2 tennis player Daniil Medvedev will not play in this year’s Wimbledon after organisers banned all Russian and Belarusian players from this year’s tournament.

Wimbledon is the first grand slam to exclude Russian and Belarusian players from competing under a neutral flag. The ban will see Medvedev and his compatriots, world No. 8 Andrey Rublev and women’s world No. 15 Anastasia Pavlyuchenkova, prevented from playing in the competition. 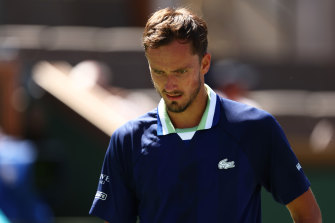 Daniil Medvedev will be blocked from Wimbledon over Russia’s invasion of Ukraine.Credit:Getty Images

The decision was backed by the British government and the national body governing tennis but condemned by the Association of Tennis Professionals (ATP), the global body governing men’s professional tennis. It said the ban violated its agreement with Wimbledon that entry is based on global rankings alone.

The All England Club said in a statement that it had a responsibility to limit Russian global influence through “the strongest means possible”.

“In the circumstances of such unjustified and unprecedented military aggression, it would be unacceptable for the Russian regime to derive any benefits from the involvement of Russian or Belarusian players with The Championships,” the statement said.

But Ian Hewitt, Chairman of the All England Club, said that if the war in Ukraine “changed materially” between now and play in June, that could change.

“We recognise that this is hard on the individuals affected, and it is with sadness that they will suffer for the actions of the leaders of the Russian regime,” he said.

The Lawn Tennis Association (LTA), the governing body for tennis in Britain, said it was united with the All England Club and that the ban would mean a consistent approach towards Russian and Belarusian tennis players would be applied across the country.

“The LTA also recognises that individual Russian and Belarusian players may not agree with the actions of their governments and this is a situation beyond their control,” the LTA said.

“Nevertheless the national governing body believes that it is important to do all it can to support Ukraine at this time, and that this move has the support of the British public.” 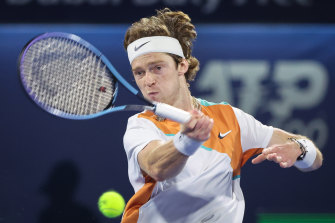 But the ATP condemned the ban and flagged possible action in response.

“We believe that today’s unilateral decision by Wimbledon and the LTA to exclude players from Russia and Belarus from this year’s British grass-court swing is unfair and has the potential to set a damaging precedent for the game,” it said in a statement.

“Discrimination based on nationality also constitutes a violation of our agreement with Wimbledon that states that player entry is based solely on ATP Rankings.

“Any course of action in response to this decision will now be assessed in consultation with our Board and Member councils,” the statement said.

Medvedev’s management was contacted for comment. The world No. 2 was briefly help the top position earlier in the year and has not outright condemned Russian President Vladimir Putin’s invasion of Ukraine. He has said that he “stands for peace”.

He had previously conceded that he might not be able to play in England this year following comments made by the UK Sports Minister Nigel Huddleston who said that Medvedev might have to denounce Putin in order to play.

The government told sports organisers that in order for Russian athletes to compete they would need to fly a neutral flag, not receive any funding aligned to Russia either directly or via sponsorships from companies operated by Putin supporters.

Athletes would also not be allowed to have expressed or intend to express any support for the invasion, Putin’s regime or Putin himself.

“The UK has taken a leading role internationally to make clear that President Putin must not be able to use sport to legitimise Russia’s barbaric invasion of Ukraine,” he said.

“Whilst the withdrawal of individual athletes is a complex issue that will divide opinion, there is a bigger cause at stake.”

The Kremlin said the ban was unacceptable.