John Wilkinson still remembers the grin on a Japanese pilot’s face as he roared by, a few metres above the road south of Darwin, in his Zero fighter.

Wilkinson, an artilleryman who had volunteered as a motorcycle despatch rider to relieve the boredom of guarding Darwin’s airfield, figured his young life was about to end. 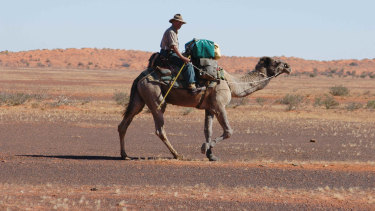 John Wilkinson, aged 100, will march in Sydney this Anzac Day.

Having heard the Japanese plane bearing down on him from behind, he veered off the road, ditched his motorbike and took cover beneath a pandanus palm.

But the pilot saw him and came back for a second look. 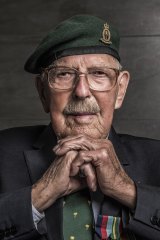 “And then he came back again and I thought, well, this is it, so I stood out on the road, thinking I would see the machine-gun bullets hitting the road in a line and perhaps I could somehow avoid them,” Wilkinson recalls.

“But he didn’t shoot. He just veered off, waved and flew away. He was wearing one of those leather caps, and I can still see the grin on his face as he went by.

He was part of a six-man military section posted to protect Darwin’s airfield, but he and another man had only a rifle and four rounds of ammunition each. The other four men were armed with sharpened steel pickets.

“I’m not sure what we were supposed to do with the pickets,” he laughs, though he admits the first Japanese bombing raid was “rather frightening”.

He would spend much of the remainder of the war in New Guinea, transferring from the artillery to become sergeant major of what was known as a “native unit” – the 2nd New Guinea Infantry Battalion.

“I enjoyed it very much, and when the war finished we were given the job of looking after the Japanese prisoners who had surrendered,” he said.

Wilkinson survived the war without being wounded and was destined to live so long that this weekend he will march in the Anzac Day parade in Sydney.

“I’m pretty healthy,” he says. “I believe the World War II survivors will be in one group, presumably because there are not many of us left.”

He is, indeed, among a very few.

He celebrated his 100th birthday on April 2.

And he knows a bit about walking.

For close on 20 years, Wilkinson – known across the inland as Wilko – was a cameleer on expeditions through Australia’s far-flung deserts.

Wilkinson in the Simpson Desert in 2006 with one of his camels.Credit:

Aged 98, he finally had to give up those long treks alongside the camels he had grown to admire.

“Wilko” lives these days in the village of Coleambally, in the NSW Riverina, where for many years he and his late wife, Joan, farmed rice.

After Joan died in 1998, Wilkinson sought out an old jackaroo friend, Rex Ellis, who had taken to running camel expeditions. After a trip through the desert of northern South Australia, “Wilko” decided camels were special creatures and he wanted to work with them.

So he became a cameleer, and when Ellis sold the operation to Andrew Harper’s Australian Desert Expeditions, “I sort of went with it as part of the equipment”.

Now that his trekking days are over, “Wilko” lives with a Jack Russell terrier known as Billy.

But he is a legend of the inland, and the Coleambally Lions Club is flying John Wilkinson and his daughter Suzie Rowe to Sydney this weekend.

So he can march and remember a life of adventure.

On his own two feet.