Kyiv: With Ukrainian forces bearing down on the occupied port city of Kherson this week, the Kremlin’s puppet rulers dispatched a team to an 18th-century stone cathedral on a special mission — to steal the bones of Prince Grigory Aleksandrovich Potemkin.

The memory of the 18th-century general is vivid for those in the Kremlin bent on restoring the Russian imperium. It was Potemkin who persuaded his lover, Catherine the Great, to annex Crimea in 1783. The founder of Kherson and Odesa, he sought the creation of a “New Russia,” a dominion that stretched across what is now southern Ukraine along the Black Sea. 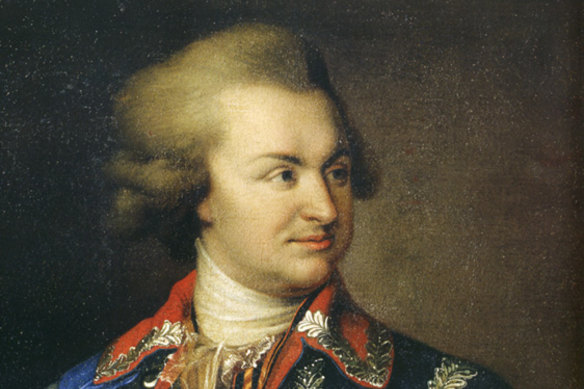 When Russian President Vladimir Putin invaded Ukraine in February with the goal of restoring part of a long-lost empire, he invoked Potemkin’s vision.

Now, with Putin’s army having failed in its march toward Odesa and threatened with ouster from Kherson, his grand plans are in jeopardy. But among Kremlin loyalists, the belief in what they view as Russia’s rightful empire still runs deep.

So it was that a team descended into a crypt below a solitary white marble gravestone inside St. Catherine’s Cathedral.

To reach Potemkin’s remains, they would have opened a trapdoor in the floor and climbed down a narrow passageway, according to people who have visited the crypt. There they would have found a simple wooden coffin on a raised dais, marked with a single cross. 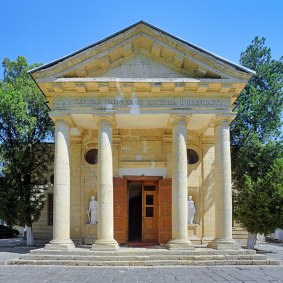 Under the lid of the coffin, a small black bag held Potemkin’s skull and bones, carefully numbered.

Kremlin proxies have made no effort to hide the theft — quite the contrary. The Russian-appointed head of the Kherson region, Vladimir Saldo, said that Potemkin’s remains were taken from the city, on the west bank of the Dnieper River, to an undisclosed location east of the Dnieper, as Ukrainian troops edge closer.

“We transported to the left bank the remains of the holy prince that were in St Catherine’s Cathedral,” Saldo said in an interview broadcast on Russian television. “We transported Potemkin himself.”

Local Ukrainian activists confirmed that the church had been looted and that, along with the bones, statues of venerated Russian heroes had been removed. By the count of historian Simon Sebag Montefiore, author of the book Catherine the Great and Potemkin, it was the ninth time Potemkin’s restful peace had been interrupted.

Montefiore said in an interview that shortly after his book’s publication in 2000, the Kremlin contacted him to say how much Putin admired his work. But Montefiore said Thursday that Putin’s reading of history was deeply flawed and that his war has reduced to ruins Ukrainian cities such as Mariupol and Mykolaiv that Potemkin and early Russian imperialists helped to build.

(The term “Potemkin village” was coined to describe an impressive facade constructed to hide an undesirable state of affairs, although Montefiore says the term was incorrectly ascribed to the prince, whose achievements in present-day Ukraine were real.)

“Potemkin would have despised Putin and everything he stands for,” he said. Potemkin and Catherine, he said, regarded that area as a cosmopolitan window onto the Mediterranean, populated by a vibrant mix of people of different ethnicities and national backgrounds.

The destruction of the cities that Potemkin helped build, he said, has cast Putin in the role of destroying those earlier triumphs.

The plundering of Potemkin’s grave is of a piece with Russia’s efforts to obliterate Ukrainian identity. Russian forces have destroyed and systematically looted Ukrainian treasures, including Ukrainian Orthodox churches, national monuments and cultural heritage sites. They sent specialists to abscond with gold antiquities from the Scythian culture dating back 2,300 years.

As of October 24, UNESCO, the United Nations agency, had documented damage and destruction in more than 200 cultural locations.

But the bones of Potemkin, a famed military commander and statesman, have added resonance for the Kremlin. Montefiore, who chronicled the “outrageously libertine lifestyle and exuberant political triumphs” of Potemkin and Catherine, noted the special place in history the pair hold for Putin and the ultranationalists, as they try to meld “the gilded majesty of the Romanov empire with the grim glory of a Stalinist superpower into a peculiar modern hybrid.”

Russian rulers have not always viewed the legacy of Potemkin and Catherine admiringly — a fact underscored by the story of what has happened to Potemkin’s remains over the centuries.

When Potemkin died in 1791, the grieving empress ordered a grand funeral and had his body brought to Kherson, where it was displayed uncovered in a specially constructed tomb in a crypt, Montefiore wrote.

By the time Catherine died in 1796, it had become something of a pilgrimage site, infuriating her son and successor, Paul I, who ruled Russia until his assassination in 1801. He ordered that Potemkin be buried in an unmarked grave, with some reports suggesting that he directed a local official to smash and scatter Potemkin’s bones in the nearby Devil’s Gorge.

For years, it was unclear if the orders were carried out.

As the Bolshevik Revolution raged, the crypt at St. Catherine’s was opened yet again and, as Montefiore noted in his book, there were yellowed photographs of revolutionaries holding up the remains.

In 1930, a young writer visited St. Catherine’s, which the Communists had renamed Kherson’s Anti-Religious Museum.

The grave was opened again in the 1980s by officials seeking to confirm the identity of the remains.

In researching his book, Montefiore went to St Catherine’s to see the remains, which he wrote were still kept in a simple black bag inside the wooden coffin.

It is not clear where they are now or what the Kremlin plans to do with them. Montefiore fully expects Potemkin’s remains to make their way to Russia, where they could feature in “a chillingly crass and television spectacular of ultranationalism.”