ENID Blyton is a beloved British author whose fans praise her best-sellers including the Secret Seven, the Famous Five and the Faraway Tree.

But to the late writer's critics, her books are sexist, racist and overly simplistic. 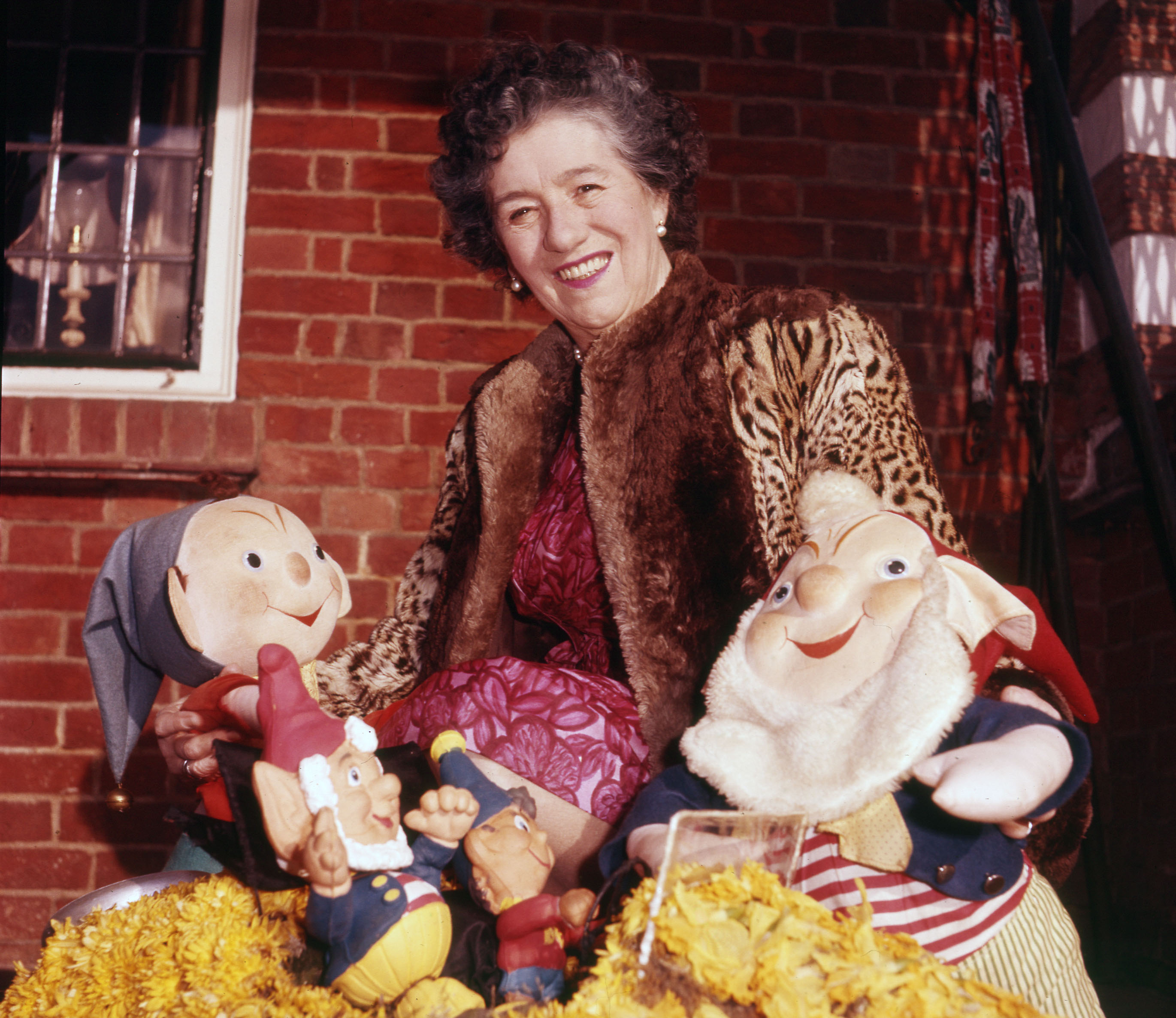 Why is 'Enid Blyton racist' trending?

Its website has included a section titled "Racism in Blyton's work".

The charity, which manages more than 400 historic monuments, buildings and places, praises her as an "extraordinarily prolific" writer.

However, it adds: "Blyton’s work has been criticised during her lifetime and after for its racism, xenophobia and lack of literary merit.

"A 1966 Guardian article noted the racism of The Little Black Doll (1966), in which the doll of the title, Sambo, is only accepted by his owner once his ‘ugly black face’ is washed ‘clean’ by rain.

"In 1960 the publisher Macmillan refused to publish her story The Mystery That Never Was for what it called its ‘faint but unattractive touch of old-fashioned xenophobia’.

"The book, however, was later published by William Collins."

The updated bio adds: "In 2016, Blyton was rejected by the Royal Mint for commemoration on a 50p coin because, the advisory committee minutes record, she was ‘a racist, sexist, homophobe and not a very well-regarded writer’.

"Others have argued that while these charges can’t be dismissed, her work still played a vital role in encouraging a generation of children to read."

There has been huge debate on social media about EH's bio, with many slamming it as another example of "cancel culture".

Broadcaster and screenwriter Dr Karl Beattie tweeted: "So now we are attacking #EnidBlyton.

"We must be running short of people to attack. You can not judge today, what was accepted yesterday, no matter how wrong it is now."

Another tweeted: "This is all getting ridiculous now. Next they will say Beatrix Potter's stories are animal cruelty!" 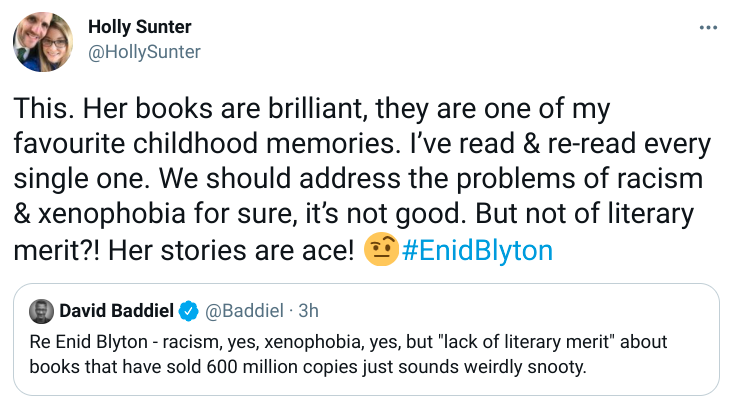 Back in 2013 The Sun reported about her classics being banned at a primary school — to win a race equality award.

They were axed by Huncoat Primary School near Accrington, Lancs, for containing “inappropriate ethnic stereotypes”.

Among those considered offensive were The Children of Kidillin and Five Go to Mystery Moor.

School bosses told the paper: "It’s about making sure children have a fair representation of different ethnic groups.

“We checked all our books. Some contained references that reflected outdated attitudes.” 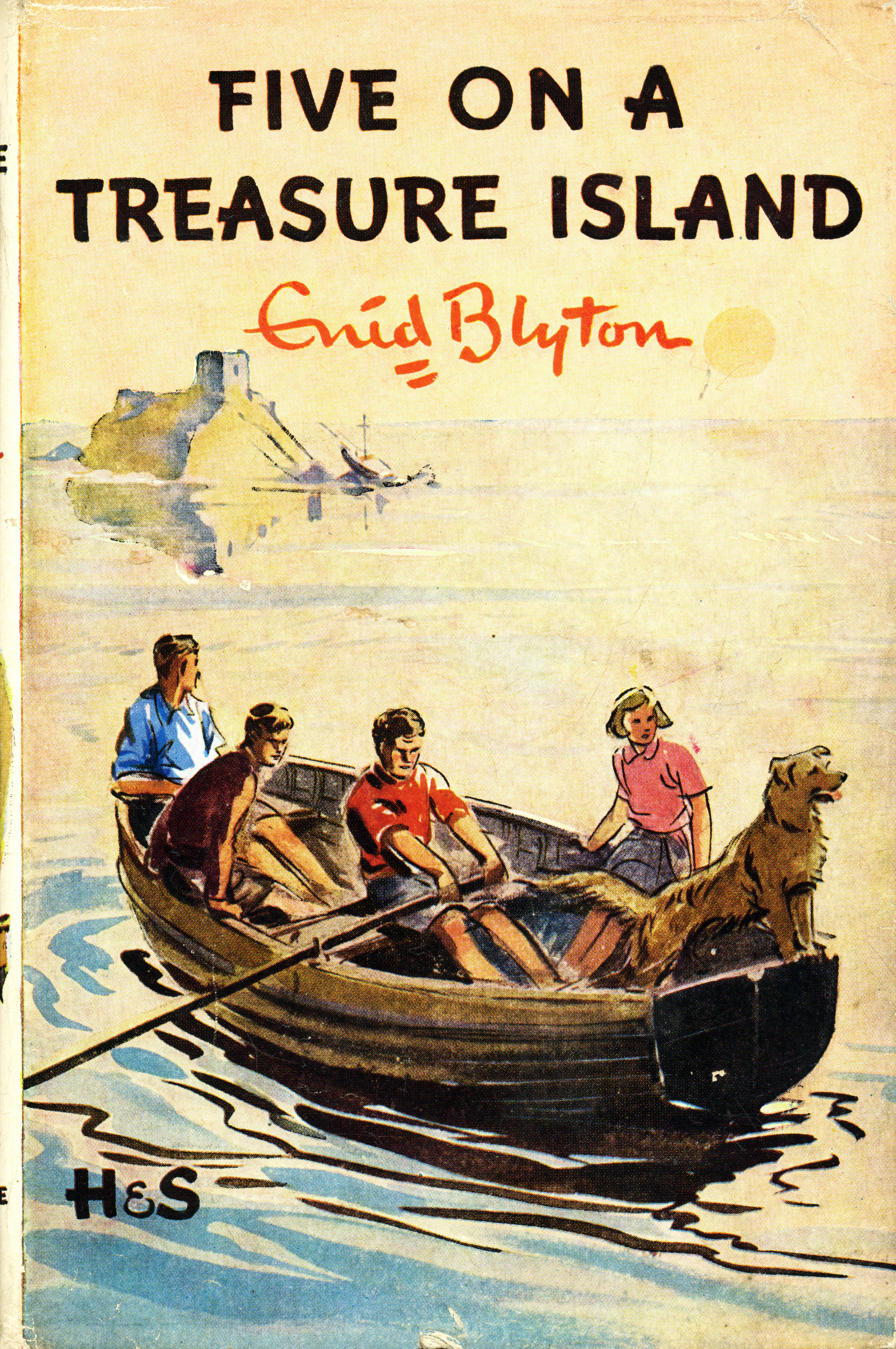 A source explained they caused offence as, “they had references to 'gypsies', 'golliwogs' and a dog with a name starting with ‘N’.”

In 2019, Roisin O'Connor's commented in The Independent: "Black people and gay people existed before 1955, and ignorance is not an excuse for outright discrimination and cruelty towards other people.

"Being old does not give you a free pass for bigotry."

But Emma Clayton wrote in the York Press: "It’s pretty well documented that [Enid Blyton] wasn’t exactly Mary Poppins – but she has a place in my heart for kickstarting my lifelong love of reading.

"I don’t feel guilty for reading this stuff, or defending Blyton, because I don’t view the past through a prism of the present." 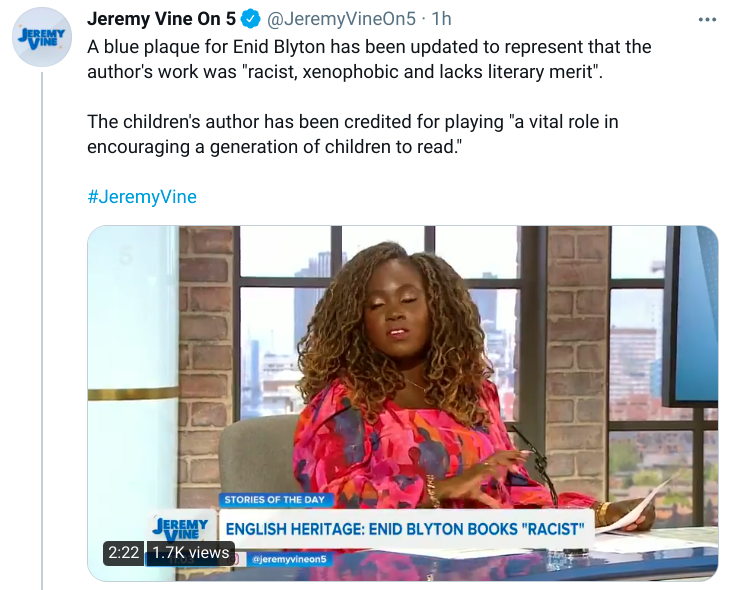 Aside from Blyton being a "racist, sexist, homophobe", parents have also questioned the way in which she wrote about the brutal punishment of kids.

For example, in May 2021 on The Enid Blyton Society website, Cathleen asked: "Why is it okay for grown-ups to slap or beat children in Enid Blyton stories?

"This question is from my young daughter and could you publish an answer for all of the little ones who have that question?"

She received this reply: "Characters in fiction tend to act in a way that reflects the usual attitudes and customs of the period in which the story is set.

"In Enid Blyton's era, the idea of parents and teachers using corporal punishment on children for serious misbehaviour was generally accepted.

"However, even at that time there was criticism if it was used unfairly, e.g. Mr. Goon's caning of his nephew Ern in The Mystery of the Hidden House is shown to be unjust.

"Reading older books can teach us a lot about history, showing how society has changed over time." 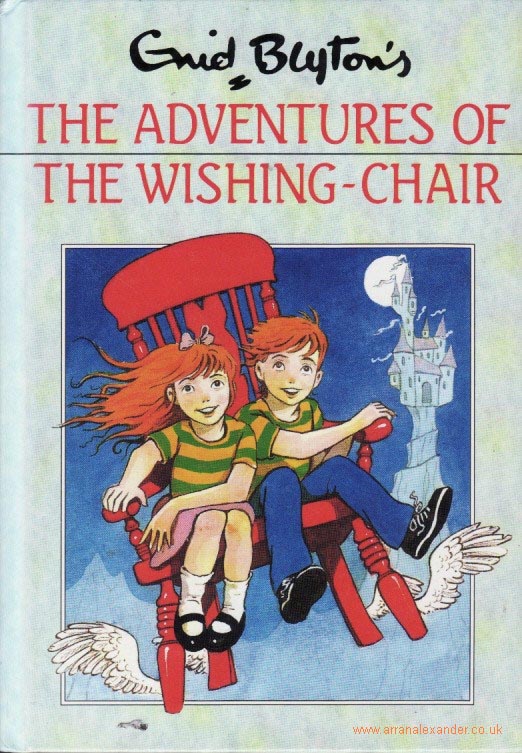 Who was Enid Blyton?

Enid Blyton is best remembered for her series of children’s books, the Famous Five and the Secret Seven, says English Heritage.

A blue plaque commemorates her former home at 207 Hook Road in Chessington, where she started to develop her storytelling skills.

Born in East Dulwich, Blyton turned to writing in her teens, but decided in 1915 to train as a teacher.

In January 1920 she worked as a governess for Horace and Gertrude Thompson at 207 Hook Road, then known as Southernhay.

She was given her own small room at the back of the house, and Blyton started to develop her children’s stories. 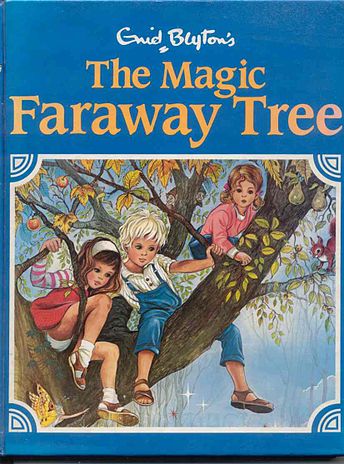 A full-time writer from 1924, Blyton was "extraordinarily prolific", EH adds.

In 2008 news agency Reuters wrote that Blyton was voted top of a poll to find Britain’s best-loved author.

In second place was “Charlie and the Chocolate Factory” author Roald Dahl, with Rowling third.

Back then, Blyton had sold more than 500 million books worldwide.

She died in 1968, and was one of the most successful children’s writers of the 20th century, Reuters adds. 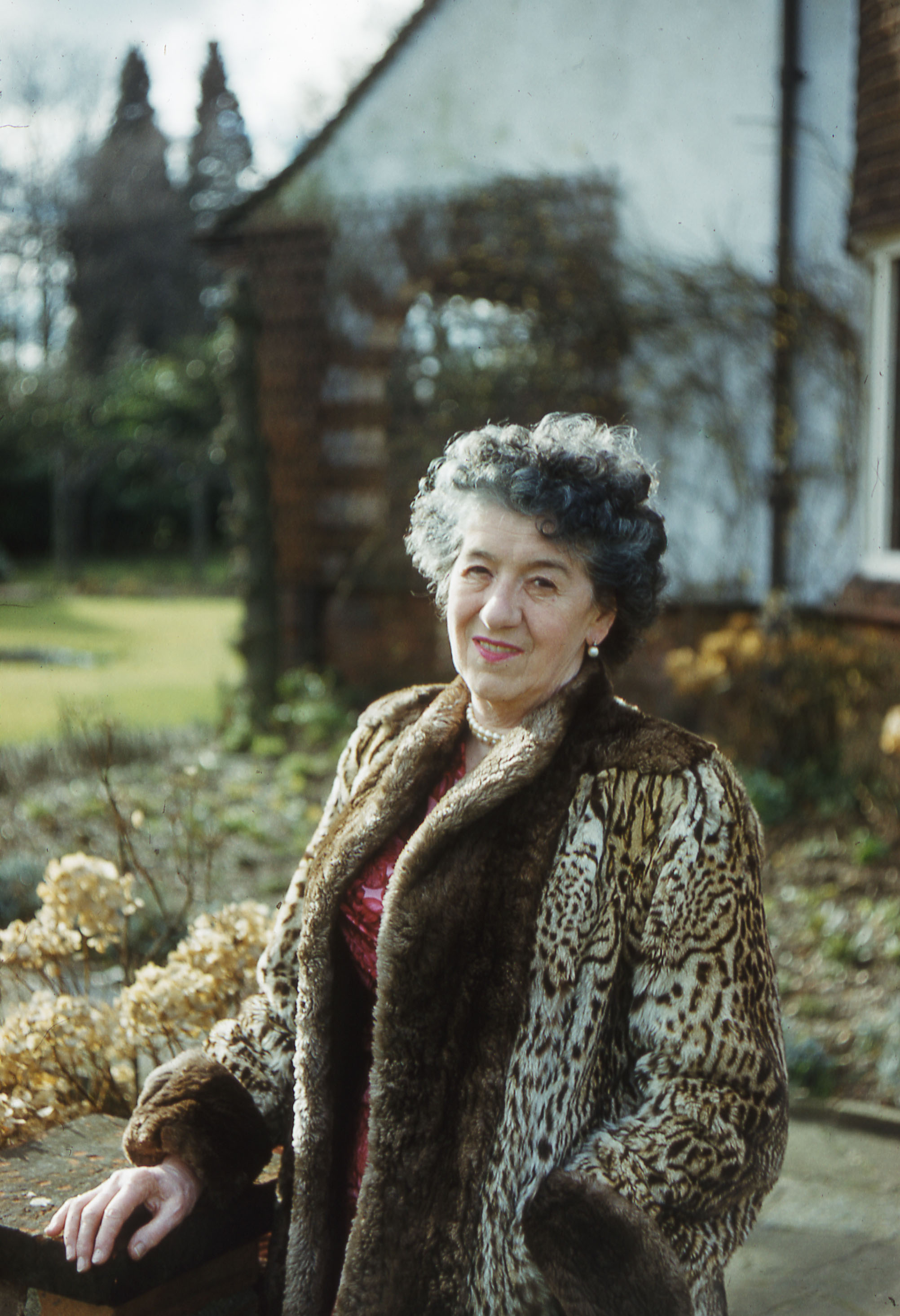 What are Enid Blyton's most famous books?

More than 10 million copies of her books a sold annually a year, drawing readers into a bygone world of carefree kids and “beastly” grown-ups.

Enid Blyton is best known for her “Famous Five” books of the 1940s and 50s in which Julian, Dick, Anne and George and Timmy the dog foil kidnappers and smugglers aided by “lashings” of ginger beer and cream buns.

She also wrote The Magic Faraway Tree, The Enchanted Wood, The Adventures of the Wishing Chair and The Secret Seven.

The Guardian explained in 2010 that her Famous Five series got a '21st-century makeover'.