Experts say our roads, with their hard surfaces, are a bit like creme brulees. There’s nothing delicious about hitting a pothole though. What causes potholes, and what’s the fix?

The universal enemy of road users is the pothole. Most of the time you never see them coming and even if you do, it’s often too late. Before you know it, your wheel is plunged into the depths of destruction and all you can do is hope for minimal damage.

This might not have been a regular occurrence for most road users but with Australians in the throes of the country’s third La Nina event in as many years, it seems there are more potholes now than ever before. 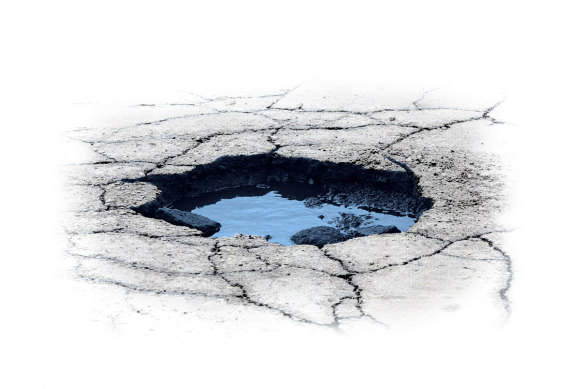 You’re not just imagining it. Data from the National Roads and Motorists’ Association (NRMA), for example, shows that callouts for wheel and tyre-related damage in NSW were up 81 per cent in August on the same time last year. With more significant rainfall predicted for Australia’s east coast until at least the end of summer, it is likely we will be living with the persistent pothole for months to come.

But why does more rain mean more potholes? What damage is it doing to your car? And how do we get rid of them?

What is a pothole and how does it form?

The hole part is all too familiar. The “pot” is believed to have come from the Middle English word for cavernous space. The modern pothole has quite specific causes.

Roads are generally made up of three layers. There are between five and 10 centimetres of asphalt on top, followed by a sublayer of natural materials and a base layer of soil.

As with anything, roads suffer from wear and tear. The top surface of the asphalt eventually ends up with small cracks as a stream of vehicles, weighing anything from 2000 to 7000 kilograms, drive over them in the same spot.

That’s not a problem. The roads remain structurally sound – until the rain comes, says Dr Behzad Fatahi, an associate professor of civil and geotechnical engineering at the University of Technology, Sydney. Because the road is no longer fully sealed, “rainwater gets under the pavement and then washes away the soil”, Fatahi explains.

There’s one factor influencing whether this wet soil becomes a pothole: drainage. A well-designed road will allow water to quickly flow out of the area. But if it doesn’t, it continues to weaken the soil. “Then you [have] an empty cavity, with very soft material,” he says.

Fatahi says we should think about rain-damaged roads as a delicious creme brulee: road surfaces are hard on top, but soft underneath – where it matters. When a vehicle goes over asphalt with little structure beneath it, the only way is down, and a pothole is born.

What kind of damage do they cause? And what should you do if you hit one?

Damage from potholes can rack up hefty bills, says Alex Khoury from the NRMA. “Road surfaces are covered with water, so motorists can’t see them and they’re driving right into them,” Khoury says. “And then you start to see some significant damage to the wheel, the axle and the suspension. So, it’s structural damage to the vehicle, which can’t be fixed on the side of the road, which means we have got to call a tow truck.”

If drivers hit a pothole they should stop to check for damage as soon as it’s safe to do so, says Andrew Kirk, principal technical researcher at the Royal Automobile Club of Queensland. “Check the wheels and tyres for signs of physical damage. If the tyre is damaged in any way, or if there are any bulges or gouges, replace it with the spare tyre,” says Kirk.

“If there is no visible damage, you can drive the vehicle but check if there’s any abnormal noise or the steering pulling sideways. If you do notice any abnormalities, arrange to have the vehicle towed to a repairer.”

NRMA mechanic Terry Smith has seen a few potholes in his time. When he’s called to one pothole-damaged car on a highway, he’ll often find two or three cars behind it with the same issue. He urges drivers to move off the road before calling for help.

“In a situation where you have blown a tyre, you’re not going to make the damage any worse by continuing to drive on to a safe place,” he says. “Sometimes you see people just stop right in the middle of the road.”

And if you’re swerving to avoid a hole, be extra cautious not to drive on to the wrong side of the road.

How are potholes fixed? Why do they come back?

The good news – or expensive news, depending on who you ask – is that potholes are entirely avoidable. As Fatahi says, it comes down to good road maintenance.

Simply, cracks should be fixed as soon as they appear.

But that doesn’t always happen.

“When they see cracks on the surface, [councils] have to come and fix it,” says Fatahi. “And if they don’t fix these holes, then definitely you’re going to see those potholes there. It’s tied to the poor maintenance of our roads.”

Australian Road Research Board chief executive Michael Caltabiano says the Band-Aid solutions motorists often complain about are necessary for traffic stability, but that doesn’t mean they’re as effective as we would like.

“Water is kryptonite to roads,” says Caltabiano. “So you must maintain the road system so that you prevent water getting into the road structure … all the preventative maintenance really comes to the fore when we have weather events.”

If a pothole isn’t fixed immediately, says Caltabiano, it turns into “a very significant failure”. Fixing them involves using a cold asphalt mix, which is less effective at staying in place over long periods of time and is the reason they keep returning. A hot asphalt mix is far more effective, but it can’t be applied during wet weather. So, we’re stuck with numerous temporary fixes. 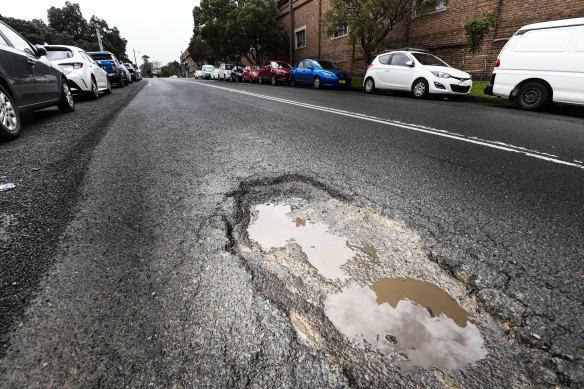 A pothole in Sydney during rains in July.Credit:Peter Rae

But it also comes down to the material we use on our roads. While roads that use cement surfaces are far stronger and less likely to crack, they’re also far more dear – up to five or 10 times more expensive than their asphalt counterparts, says Fatahi. That makes them an unattractive option for governments building new roads. (He hasn’t done specific calculations, but Fatahi estimates that repairs of broken potholes would cost nearly the same amount in the long term as upfront costs for cement roads.)

In Victoria, the government has allocated more than $780 million to repair 1600 kilometres of road surfaces, and the Opposition has promised to spend $10 billion on road maintenance in the next 10 years if elected in November.

Sign up for our Explainer newsletter – enlightening explanations for the world’s complex issues, delivered to your inbox every Sunday night.