Bhaumik Dholakiya wept, cradling his 11-month-old son in his arms, as his father succumbed to coronavirus in a crowded hospital ward in India last week.

The Melbourne man’s entire family, including himself, his wife, Laxita, and their baby boy, Reyansh, have been infected with COVID-19 during India’s deadly second wave, as hospitals run out of beds and oxygen and people die in lines waiting to see doctors. 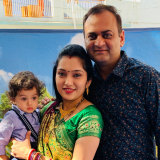 He said the three-week pause on flights had worked to slow the rate of COVID-19 infections in quarantine and the first flight into Darwin to retrieve Australia’s most vulnerable citizens in India will touch down on May 15.

But for people like Dholakiya, who swore allegiance to Australia when they became citizens and relinquished their Indian citizenship, returning still feels like a distant dream. Chartered flights are capped, meaning thousands of people will still be waiting in pandemic-stricken India indefinitely.

“India is burning and the Australian government doesn’t seem to understand that it is a war zone here,” he says. “There are dead bodies being burned on the streets. We understand the need to protect Australia from this virus. It is a country we love and it is our home. But we are feeling alone and in great distress.”

More than 10,000 kilometres away, in the Melbourne suburb of Balwyn, Amarpreet Kaur sits with tear-stained cheeks on a white sheet in the middle of her living room. Her sons, Varsh and Veraj, are sitting by her side as they pray for the soul of her mother and their grandmother Jasbir.

Dappled sunlight falls through the red and green leaves of the cherry tree in the backyard as 10- year-old Veraj leans in to hug his mother. “It’s going to be okay mum,” he says. 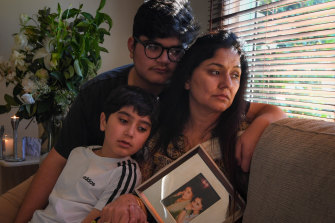 Unable to travel to Indore, a city in the central Indian state of Madhya Pradesh, Kaur watched her mother die on Facetime.

Jasbir’s face, tiny and blurry on the screen, was contorted with pain. In her final moments she raised her hands to bless the nurses who had cared for her and her children who were watching her die from Australia, Britain and Thailand. Her last words were mere bache bahut ache hai – “my children are very kind”.

“I have never felt so helpless in my life,” Kaur says. “She was alone. She was suffering. My beautiful mother, who was the queen of kindness, and I couldn’t be there to hold her.” 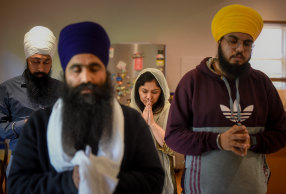 Amarpreet Kaur in prayer with Sikh Volunteers Australia, who are visiting homes of people who have lost loved ones in India to COVID-19.Credit:Justin McManus

“If you don’t have anyone to talk to the pain is so much greater,” he says.

In Sydney, Baljit Khare’s 10-year-old son asks his father the same question every day: “When is mum coming home?”

Khare’s wife Paramjit, an only child, left Australia in the last week of February after being granted an exemption to care for her critically ill parents in Punjab. 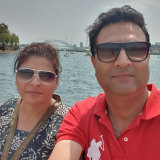 Paramjit Khare with her husband, Baljit.

Khare says while he understands the need to mitigate the risk of renewed outbreaks in Australia, the government’s announcement that it would criminalise its own citizens for trying to return home was heavy-handed and heartless. “It went too far,” he says.

In India, the crisis worsens every day. Unable to afford rent, Baljinder Singh – trapped in India with his wife and son for more than a year – moved all his family’s belongings into a storage container in Western Australia. Soon he will start selling off all their possessions.

The family travelled to India to care for Singh’s dying mother. But now he fears his son could die in India before they are able to get home. Nine-year-old Shabaaz, an Australian citizen like his parents, has chronic asthma. 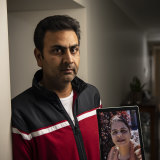 Baljit Khare with a photo of his wife.Credit:Wolter Peeters

The toxic smog that hangs in the streets of Punjab in India’s north, where the family has been stranded since February last year, leaves the boy gasping for breath. Each day he begs his father to go home.

Of the 9000 Australians stranded in India, more than 900 are classed as vulnerable, like Shabaaz, whose asthma puts him at heightened risk of severe illness or death if he were to be infected with COVID-19.

“If something was to happen to him I would always blame myself,” Singh, a truck driver who has lived in Australia for 23 years, says. “I could not let my mother die alone, but never could I have ever imagined we would be locked out of our own country for almost a year now.”

If something was to happen to him I would always blame myself.

The family were booked on a flight home last March but it was cancelled hours before the plane was to depart, just as Australia snapped its borders shut.

India has deep roots in Australia. The number of overseas-born India migrants is growing more than any other group in Australia, increasing from 449,000 to 721,000 in the last five years. 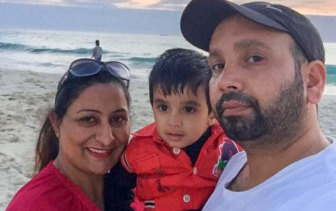 Kuljeet Kaur, her husband, Baljinder Singh, and their son, Shabaaz.

There are more than 169,802 Indian-born people living in Victoria – 3 per cent of the state’s population – and more Indians live in Melbourne than any other capital city in Australia. Census data shows 8 per cent of Liverpool residents in NSW have Indian ancestry, four times the national figure.

“We feel very betrayed,” says Melbourne woman Ara Sharma Marar, who is stuck in India after flying back at the beginning of April to care for her critically ill parents.

“Are we really Australian if the government doesn’t see us that way? What is going to happen if we die while waiting for a flight? Who is responsible for our deaths?”

‘We can’t leave our parents to die’

Marar remains frustrated by the misconception that people were flying to India for holidays, fuelled by the revelation that a man whose COVID-19 case sparked a snap lockdown in Perth last weekend had been at a wedding in India.

“We are the first generation of Indians in Australia and it is our culture that we can’t leave our parents to die,” she says.

“We have to look after them like they have looked after us. It is our upbringing and culture.”

For Marar, the actions taken by the federal government have caused irreparable harm. “It was inhumane,” she says. “There will be hurt for a long time to come.”

Liverpool City Council councillor Charishma Kaliyanda was sitting in a council meeting in Sydney when her phone rang last week. It was a relative calling to tell her that her grandmother had died in rural India.

“For my mother in particular it was extremely difficult,” Kaliyanda says. 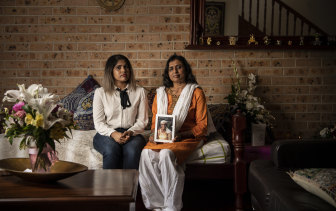 Charishma Kaliyanda with her mother Bhanu Chottera. Bhanu is holding a photo of her mother Gangamma Chottera who passed away last week in India. Credit:Wolter Peeters

Kaliyanda has heard countless stories of friends of trapped in India.

“There are Australians who may have lost their only family members over there. We’ve just thrown them to the wolves, it’s just awful.”

Census data shows 8 per cent of Liverpool residents have Indian ancestry, four times the national figure. Kaliyanda says much of the anger in the Indian community stems from the fact India has been treated differently to the US or Britain which had higher numbers of coronavirus cases.

“There’s a real kind of anger around this,” she says. “When you’re a second-generation immigrant, you grow up here in the belief and knowledge that you’re a full and equal citizen. We talk about multiculturalism and diversity as a thing we’re proud of [but] when it comes to policies like this it does matter where your parents come from because you are treated differently.

“If you find yourself stuck there because you’re playing cricket or some other economic reason, there’s less suspicion about your desire to come home.”

She also suspects the ban has also shifted the political landscape of Indian Australians.

“People who would ordinarily vote Liberal or be very uncomfortable making political statements in a public space have made very angry statements on social media talking about the impact of this on their own lives,” she says.

The decision to invoke the Biosecurity Act to prevent citizens returning home has also triggered a fierce backlash from experts, who question its legality amid concerns Australia is treating the subcontinent differently to other parts of the world that suffered devastating COVID waves. Similar steps were not enacted when the US, Britain, Europe and Brazil were all enduring deadly outbreaks in the past year.

Sangeetha Pillai, a constitutional lawyer and expert in citizenship law, says it is unclear yet if the decision, understood to be the first time Australia has ever banned its own citizens from returning home, was on a solid legal footing.

“The short answer is, we just don’t know yet,” she said. “There is very little written Australian law about the rights that are attached to citizenship. But what this ban has done is impose restrictions on Australians entering the country in a way that’s never been done before and that tests fundamental assumptions about citizenship.”

An urgent federal court challenge on the Morrison government’s temporary ban would be a “landmark case globally,” she says.

While debate about the ban continues to rage a national poll of more than 2000 people has suggested that most Australians are support with how the country has handled the COVID-19 pandemic.

The poll commissioned by the Lowy Institute shows only one in three voters believe the federal government should do more to help stranded Australians return home during the coronavirus pandemic, while an overwhelming majority are happy with how Australia has tackled the health crisis so far.

Dr Yadu Singh, president of the Federation of Indian Associations, said there was a perception among some in the community that the travel ban was racist and had put Australian citizens in danger.

The cardiologist said he initially felt strongly the measures had been “uncaring” but he never believed the ban was racist and was relieved the government eased the measures on Friday.

“I come from a medical background so I realised how much danger there was by having an infected person on the plane and that person infecting everybody else,” Singh says.

“The government had to act, but the messaging was not good. They did not manage the communication well at all and it caused people a lot of distress and left some bad feelings in the community.”

Asked about whether the ban would have an enduring legacy, Singh says it is too soon to say.

Responses with the Indian community itself have been divided, he says. But he is hopeful that once the emotion dies down, tensions will ease.

“Of course there will be some people in the community who have grievances about this,” he says. “I choose to take an optimistic view about it and hope that time will heal all.

“But it is the job of the government now to do everything they can to remove this feeling among the Indian community.”

Our Morning Edition newsletter is a curated guide to the most important and interesting stories, analysis and insights. Get it delivered to your inbox.