“Incompatible with life” were the words used to describe the health condition of Alice Traill’s 12-week-old fetus.

Screening showed Edward’s organs were growing on the outside of his body, among many other abnormalities, which doctors said meant he would not survive after birth – if he even made it that far. 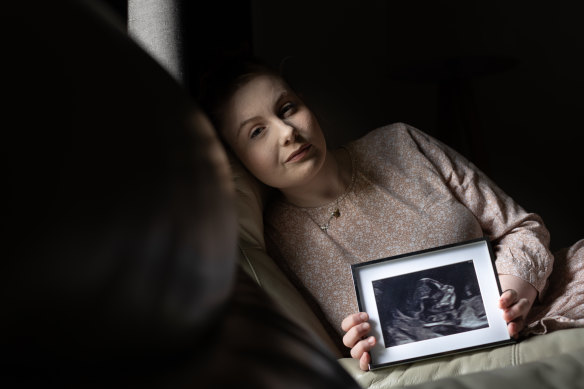 Alice Traill underwent a termination for medical reasons after she was told her 12-week-old fetus was “incompatible with life”. She was shocked and distressed when she was told the hospital she had attended would not perform the procedure.Credit:Jason South

With broken hearts, Traill and her partner, Nick Vecoli, made the decision to terminate her pregnancy the following week.

They assumed they could have the procedure done at St John of God in Geelong, the Catholic hospital where they had been seeing their obstetrician.

But they were left shocked and distressed when the hospital refused the procedure on religious grounds.

“I’m doing the most loving and compassionate thing for my child and they don’t want me … because they see me as this horrible person,” Traill said. “I’d been crying on the bathroom floor, begging to God to make this not true. [The hospital’s refusal] just added such another layer of grief.”

All of the public and private Catholic hospitals in Victoria that provide maternity services refuse to perform what is called a “termination for medical reasons” (TFMR). This is when a pregnancy is terminated due to the ill health of a fetus or mother.

Taxpayers not only fund the church’s public hospitals, but a third of its private ones, according to the Australian Institute of Health and Welfare.

Many Australians have been horrified by America’s recent abortion ban, but many do not realise that some hospitals here, both public and private, refuse to perform terminations on religious grounds.

Other stories are also hidden from view. Dozens of women who spoke to the Sunday Age said they received little support after receiving non-invasive prenatal screening or prenatal diagnostic results that suggest or show fetal abnormalities, whether they continue their pregnancy or not.

Genetic counselling is offered as part of the screening, but many women say this lacks an emotional component.

Diagnoses can vary from certain outcomes to what are described as “grey” prognoses, where the outcome on quality of life has huge variables, from mildly disabled to severe, or a potentially painful death, making parents’ decision-making process complex.

Prenatal testing and ultrasounds can increasingly diagnose little-researched conditions, sometimes leaving women or couples with next to no information about potential outcomes.

At 25-weeks pregnant, Marika Mulvey, then aged 28, received amniocentesis results at Box Hill Hospital that her daughter Daisy had a rare deletion of genes, which geneticists connected to at least seven different syndromes.

Mulvey had previously been told Daisy had spina bifida, but was not considering termination. However, genetic doctors didn’t provide any optimism for Daisy’s quality of life with the condition, leading Marika and her husband, William Mulvey, to terminate the pregnancy at Monash Children’s Hospital.

The couple made the decision based on what they thought was best for Daisy, but on Mulvey’s darkest days she questions it due to the unknowns about Daisy’s condition and the lack of support.

“There was just a big lack of emotional support throughout all of that, it was very clinical,” Mulvey said. “That’s why the guilt and regret will never fully disappear.”

According to one American study, 88 per cent of women and 83 per cent of men found receiving a prenatal diagnosis traumatic, yet Australian pregnancy loss helpline Red Nose isn’t funded to provide support until after a termination takes place.

Red Nose chief executive Keren Ludski recognises the “very significant gap” in support provided from diagnosis to termination, a gap the organisation thought was being filled by hospitals.

“We are certainly more than interested in filling that void, however, we would need to train the peer supporters to be comfortable in that space,” she said.

A fifth of the calls to the helpline are from people wanting support after TFMR. It’s the second-most-common cited reason for calls behind miscarriage, which takes up a quarter of calls.

Through the Unexpected is a new organisation that hopes to gain funding to support people through prenatal diagnosis, whether they choose to continue their pregnancy or not, and reduce the silence and shame surrounding the experience.

Executive director Pieta Shakes, who continued her pregnancy after receiving a prenatal diagnosis of agenesis of the corpus callosum at 31 weeks, said TFMR was often stigmatised because it sat at the crossroads of abortion and disability rights.

“There’s a whole lot of stigma about any decision that people make,” she said. “And I use that word very cautiously because, for some people, they don’t feel that they have a decision.”

Shakes, who was left distressed after being questioned by a sonographer as to why she wasn’t terminating her pregnancy, said the organisation was developing training for health professionals on best-practice communication.

“There’s a lot of literature about how people need support. They need more than just information. They need follow-up. It’s not happening,” she said.

Shakes said many women told their friends and families they had a stillborn instead of a termination for medical reasons due to fear of judgment. US model Chrissy Teigen recently revealed she had a termination in 2020 rather than a miscarriage, which is how the event was reported at the time.

It wasn’t until a 20-week ultrasound that Sophie Cox discovered her daughter, Juno, was not developing due to excess amniotic fluid squashing her organs.

From there on, scans progressively showed a decline, but testing showed no diagnosis.

Cox and her husband, Adam Zimmermann, were told that in some cases the condition was reversible, but when Juno’s heart rate slowed and Cox’s health also began to decline, they were forced to make a decision to terminate six weeks later, without yet knowing the cause.

“I do remember just having this feeling of like, I’m never going to be able to be 100 per cent comfortable that I’ve made the right decision … because we were in a grey area,” she said.

Cox said she would have liked psychological support through the decision-making process, but it was after leaving the Royal Women’s Hospital that she really felt let down. She received one phone call from a social worker six weeks later. She also developed an infection that required surgery, after receiving no physical follow-up following the termination.

“I walked out the front door of the hospital and I was completely forgotten …I couldn’t leave my house. I felt like I couldn’t parent my child,” she said. “I just felt so fragile, like I would just break into a million pieces at the slightest bit of stress…

“Part of the weight with TFMR is the decision, that’s the thing that distinguishes it,” she said. “You have to play an active part in the end of your baby’s life. And I think if you haven’t been through that, you can’t understand.”

Victorian crossbench MP Fiona Patten’s bill to cut funding to religious hospitals that refuse to offer any type of abortion was voted down by Labor last month. She plans to reintroduce it if re-elected at the November state election.

St John of God Geelong Hospital chief executive Stephen Roberts confirmed pregnancy terminations were not offered at the hospital, among a small number of reproductive services, but said specialists were able to recommend other facilities where patients could have the procedure.

A Royal Women’s Hospital spokeswoman commended Cox’s strength at coming forward with her story, and apologised if she felt she didn’t get the support she needed.

“We know that provision of termination care in the context of fetal abnormalities is a very challenging time and each person’s needs are unique,” the spokeswoman said.

“We strive to provide meaningful follow-up and support to everyone who has suffered this loss. We are grateful for this opportunity to see if we can improve the care we provide in the future.”

The best of Good Weekend delivered to your inbox every Saturday morning. Sign up here.