Moscow: Europeans gasped when the Belarusian authorities scrambled a military jet and forced a Ryanair flight bound for Vilnius to land in Minsk in order to detain a journalist.

However, for Alexander Lukashenko, who has ruled Belarus since that reporter, Raman Pratasevich, was born, it was just another move to cow his opponents in the face of an underwhelming response by the West to his regime’s staggering atrocities.

Western nations last year imposed economic sanctions and visa bans on some Belarusian officials but they did nothing to deter Lukashenko, whose recent attacks against civil society show an utter neglect for international law. 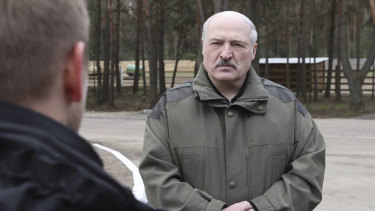 Belarus made international headlines last summer when Lukashenko, deeply unpopular after 26 years in power, was handed a suspicious landslide at the presidential elections, triggering the country’s biggest protests since the fall of the Soviet Union.

Riot police beat thousands of protesters and hundreds of people were later tortured in custody. The sadistic violence turned even more Belarusians against Lukashenko and triggered a new wave of protest.

In mid-August, Lukashenko was seemingly a few days away from being toppled, until he deployed KGB agents to intimidate factory workers and the demonstrations began to fizzle out.

The Kremlin was long rumoured to be pushing Lukashenko to agree to a peaceful transition but the Belarusian leader apparently convinced his Moscow counterparts that he had a firm grip on power.

As the protests grew smaller and courts began to bring criminal charges against protesters, the Belarusian regime became even more brazen in eradicating even the slightest display of discontent.

Britain, the EU and other Western nations condemned the crackdown and imposed three sets of sanctions. However, Belarusian dissidents and several central European countries expressed frustration that the measures were too narrow.

The latest, fourth, set of sanctions has been under discussion by the EU’s 27 members for several months.

Belarus is largely reliant on Russia, not Europe, for trade, and there is not much that Brussels can do to hurt its economy. Similarly, visa bans have been described as too narrow, mostly targeting Lukashenko’s inner circle.

Sviatlana Tsikhanouskaya, who ran for president last year after her husband was jailed, has been lobbying for stronger sanctions for months, as the restrictions do nothing to keep the dictator in check.

“The time for statements is obviously over,” she said on Sunday.

“Belarusians are expecting decisive actions and assistance from the international community.”

The seeming imperviousness to sanctions is not limited to Belarus.

North Korea acquired “as much as two billion [US] dollars” from its sophisticated cyber activities against financial institutions and crypto-currency exchanges, allowing it to funnel cash to the heavily-sanctioned regime.