Hospitality has joined a growing list of industries hoping to get early access to Pfizer vaccines for its young workers in customer-facing roles to help restaurants and bars to safely reopen. 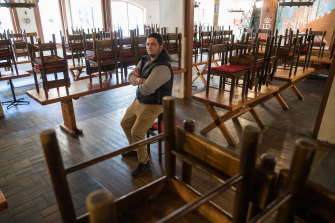 Philipp Hockenberger at the Hofbrauhaus Melbourne, part of the Hoff Group.Credit:Jason South

Wes Lambert, chief executive of the Restaurant and Catering Industry Association, said the rollout should shift focus to customer-facing jobs once extra Pfizer and Moderna shots start to arrive next month.

He has joined with hospitality operators around the country, led by Melbourne start-up and online platform Mr Yum, to ask for early access in a joint letter to federal Health Minister Greg Hunt.

The letter has been signed by dozens of businesses representing more than 450 venues around Australia, including Smith & Daughters in Fitzroy, Stomping Ground and Rice Paper Scissors.

All adults under 40 can now receive AstraZeneca, if they provide informed consent, and Dr McRae encouraged people to do so if they were comfortable. Victoria’s state-run clinics expanded access this week and more than 15,000 young people had made bookings by Monday.

Pfizer remains the preferred option for people under 60, but the government has not yet provided broad access to people under 40.

Philipp Hockenberger, from The Hoff Group, whose team is mostly aged under 40 and unable to access Pfizer, said their staff can’t work from home like in many other industries.

“Lockdowns really hurt hospitality and the tourism industry the most if you really look at it. We can’t work from home.”

Josh Morelli, operations manager at The Hoff Group, who is booked in to receive the AstraZeneca, said he would be in close contact with potentially thousands of people on a Friday or Saturday night during normal trade.

“When you’re dealing with that many people all the time, it’s obviously a risk,” Mr Morelli said.

Young people are the least likely to be vaccinated and are also the most likely to work in customer-facing jobs.

Hospitality has the highest concentration of workers under the age of 40 of any industry, according to ANZ analysis of Australian Bureau of Statistics data. Three-quarters of the workers were aged 15 to 39 in May and 45.9 per cent were younger than 24.

Restaurants, cafes and caterers employ about 350,000 people nationwide, Mr Lambert said, which is down about 100,000 because of the pandemic. Victoria employs 30 per cent of the country’s hospitality staff.

Duncan Thompson, chief executive of Collective Heads which owns The Terminus in Fitzroy North, said staff were keen to get back to work and get vaccinated.

“Whatever we can do to support our businesses to open in a safe environment, we as an industry, we would do everything,” he said.

Supermarket workers and teachers in Sydney’s hotspots have been prioritised for the jab and construction workers are allowed back on site if they have been vaccinated.

Victoria’s construction industry has also pushed for help to get its workers inoculated.

A spokesman for the federal Department of Health said national cabinet agreed to vaccinate people by age while the states have chosen other cohorts to prioritise.