For the bulk of his presidency, US President Donald Trump has been haunted by the spectre of what he calls “the witch hunt” – Robert Mueller's probe into Russian interference during the 2016 election. After working quietly for almost two years and racking up dozens of indictments, Mueller is reportedly close to finishing his inquiry (although the probe's conclusion has been prematurely predicted many times before).

As part of his brief, Mueller is required to submit a report to recently appointed Attorney-General William Barr outlining his prosecutorial decisions. But this may not be especially detailed and Barr may decide not to release the full report to Congress.

Still, the stakes are high. Already Mueller has indicted 34 people, including six Trump advisers and Russians for hacking and spreading disinformation. If Mueller finds Trump colluded with Russia or was guilty of a crime, he is likely to face impeachment proceedings. This is the bombshell everyone is watching for.

Donald Trump calls it all “a made-up story”. To understand how the story goes, it helps to know the main characters. 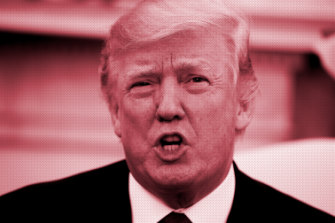 Donald Trump: "It’s an excuse by the Democrats for having lost an election."Credit:AP

“I said to myself, 'This Russia thing with Trump and Russia is a made-up story.”

The US President has repeatedly said that there was no collusion between his campaign and Russia during the 2016 election. Yet, even among those who believe him, his behaviour towards Russian President Vladimir Putin has been consistently perplexing.

As far back as 2013, Trump said Putin could be his “new best friend” and praised him for outsmarting the US. During the election campaign, he described Putin as “really very much of a leader” and repeatedly predicted that they would get on. Trump also famously urged Russia during a speech to release Democratic candidate Hillary Clinton's deleted emails.

Trump has said that his decision to fire FBI director James Comey in May 2017 had nothing to do with the agency's investigation into Russian election interference. But at the time, he also told the US national broadcaster NBC the investigation was on his mind during the firing.

“And, in fact, when I decided to just do it, I said to myself, I said, ‘You know, this Russia thing with Trump and Russia is a made-up story, it’s an excuse by the Democrats for having lost an election that they should’ve won’,” he said.

Soon after Trump fired Comey, the FBI opened an investigation into whether Trump was working on behalf of Russia. The inquiry was soon taken over by special counsel Robert Mueller.

Since winning office, Trump has continued to be unusually friendly with Putin. In his infamous press conference at Helsinki last year, he sided with the Russian leader over his own intelligence agencies on the question of whether Russia had meddled in the 2016 election.

But he has maintained most sanctions on Russia and late last year cancelled a planned meeting with Putin over Russia's naval clashes in Ukraine. 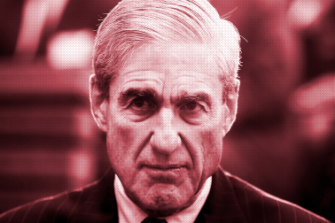 Hasn't spoken publicly or been photographed since his appointment …

The special counsel has been one of the most discussed people in American politics since he was appointed to investigate Russian election meddling in May 2017. That's despite the fact he has been a mysterious, virtually invisible figure during that time.

Mueller hasn't spoken publicly or been photographed since his appointment; indeed, he's rarely been sighted at all. And, to the frustration of reporters, his investigation has been remarkably leak-free.

The third category has given Mueller latitude to investigate wrongdoing, and many of his indictments and referrals to other authorities relate to crimes unrelated to Russia or the 2016 election.

It has also given Mueller scope to investigate whether Trump or his allies attempted to obstruct justice through actions such as firing FBI director James Comey.

During the course of his investigation, Mueller has indicted 34 people and three companies. Among those indicted are six former Trump advisers as well as Russian nationals indicted for spreading disinformation and for hacking into the Democratic Party's email servers.

Although Trump has painted Mueller's probe as a witch hunt, the special counsel is a registered Republican and has been a long respected figure on all sides of politics in Washington. George W. Bush appointed Mueller to lead the FBI in 2001 and he continued in the role until 2013. 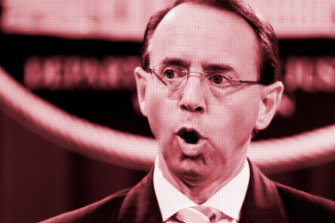 “The public interest requires me to place this investigation under the authority of a person who exercises a degree of independence.”

The Deputy Attorney-General set the Mueller probe into motion. Rosenstein appointed Mueller as special counsel in May 2017 at what was a particularly wild and frenzied time inside the Trump administration and the Department of Justice. Trump had just fired FBI director James Comey. Then attorney-general Jeff Sessions had recused himself from any involvement in the FBI's Russia investigations.

(Trump cited a memo written by Rosenstein, saying Comey had caused "substantial damage" to the FBI's reputation through his handling of the Hillary Clinton email scandal, as a justification for firing Comey.)

Rosenstein said in a statement that he did not know if crimes had been committed. He added: “What I have determined is that based upon the unique circumstances the public interest requires me to place this investigation under the authority of a person who exercises a degree of independence from the normal chain of command.”

Rosenstein was in charge of overseeing the special counsel investigation until last November, when Trump fired the recused Sessions and replaced him with an acting attorney-general, Matt Whitaker.

Former FBI deputy director Andrew McCabe recently said that Rosenstein had offered to wear a wire to secretly record conversations with Trump and that he had discussed invoking the 25th Amendment to the Constitution, which allows a president to be removed from office by a majority of the cabinet.

Rosenstein, a registered Republican, is expected to step down from his position this month. 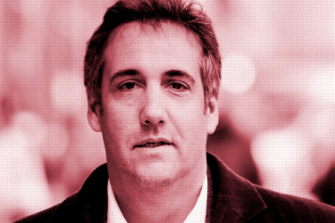 Sentenced to jail for a “veritable smorgasbord of fraudulent conduct”.

Trump's former personal lawyer was widely known as the President's “fixer” and “pit bull” because of his willingness to defend his boss at any cost. But Cohen has since turned against his patron and this week described Trump as a “racist”, a “conman” and a “cheat” at congressional hearings in Washington.

Cohen was sentenced to three years in jail in December for what a judge described as a “veritable smorgasbord of fraudulent conduct”. Many of Cohen's crimes – such as bank fraud and tax fraud – did not involve Trump or the 2016 campaign, but some did.

Cohen pleaded guilty to violating campaign finance rules “in co-ordination with and at the direction of a federal candidate for office” – that is, Trump.

He testified that Trump had directed him to make hush money payments to adult film actress Stormy Daniels and Playboy model Karen McDougal, contradicting Trump's previous claims that he was not aware of the pay-offs.

He also admitted to misleading Congress about negotiations to build a Trump Tower in Moscow. Cohen initially said the proposal was terminated in January 2016 but, in fact, negotiations continued until June, by which time Trump had secured the presidential nomination.

Cohen told Congress this week that he did not have any “direct evidence” of collusion between Russia and Trump or his campaign. 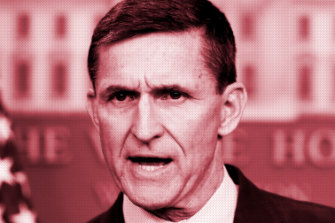 “I hope you can see your way clear to letting Flynn go.”

The retired army general lasted just 24 days as Trump's national security adviser. Flynn was forced to resign for misleading Vice-President Mike Pence about his communications with Russia's then US ambassador Sergey Kislyak during the transition period to government. Even more damaging for Flynn, he also lied around the same time to the FBI by saying he had not discussed US sanctions on Russia with Kislyak, when they had.

At the time, authorities were investigating Flynn over his work as a paid lobbyist promoting the Turkish government. It was only in March 2017, after his departure from the administration, that Flynn and his consulting firm retroactively registered as foreign agents working on behalf of Turkey.

The day after Flynn's resignation, Trump met with Comey and said “I hope you can see your way clear to letting this go, to letting Flynn go”, adding “he's a good guy”.

Flynn has pleaded guilty to lying to the FBI and has been co-operating extensively with the special counsel's investigation. Mueller's team has said that Flynn should receive little to no jail time because of his assistance and the fact he had accepted responsibility for his crimes. His next sentencing hearing is on March 13. 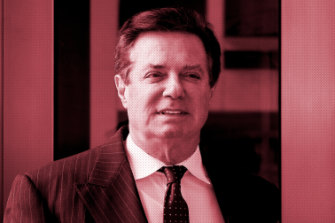 Paul Manafort: Unlike Cohen, he has not “flipped” on the President.Credit:AP

Once an adviser to Republican presidents Gerald Ford, Ronald Reagan and George H.W. Bush, Manafort is a veteran of the conservative political establishment in Washington. Alongside fellow operatives Roger Stone and Charles Black, he co-founded one of the most powerful lobbying firms in the US, a move that allowed him to translate his political connections into a lucrative business.

Manafort became Trump's campaign chairman in June 2016, at a time when the campaign was in disarray. He served in the role for only a few months before being replaced by Steve Bannon.

While serving as campaign chair, Manafort participated in a now-infamous Trump Tower meeting with Jared Kushner, Donald Trump jnr and Russian attorney Natalia Veselnitskaya. The Trump operatives were hoping to get dirt on Hillary Clinton, but said Veselnitskaya was instead lobbying on adoption policy (US citizens had been blocked from adopting children in Russia by Moscow in 2013, in response to US sanctions on Russian officials).

Manafort was found guilty of eight charges of tax and bank fraud in August – offences not related to his role working for Trump. Unlike Cohen he has not “flipped” on the President, seemingly in the hope of receiving a presidential pardon so he doesn't have to spend much of the rest of his life in jail. He is due to be sentenced this month. 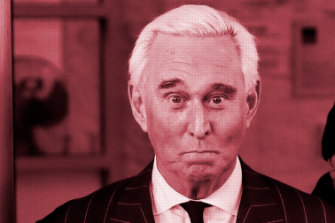 The famed “dirty trickster” with a tattoo of Richard Nixon on his back is one of the most colourful and controversial characters in US politics.

Like his longtime associate Paul Manafort, Stone is a veteran of Republican politics and later became a lobbyist. He is a longtime friend of Trump and urged him to run for president as far back as the 1990s, long before the idea seemed credible.

Stone had a short-lived stint as an official adviser to Trump early in the 2016 campaign but stayed in touch with Trump and other members of the team.

During the campaign, Stone was in contact with Guccifer 2.0 – the hacker who stole emails from the Democratic Party – but denies knowing the persona was a front for Russian intelligence officers. Stone has also admitted to having “back-channel communication” with WikiLeaks founder Julian Assange and appeared to have the inside running on WikiLeaks email dumps.

He has denied tipping off Trump about the email releases, though this has been contradicted by Michael Cohen.

Not long before Hillary Clinton's top adviser John Podesta had his emails published, Stone tweeted that it would soon be “Podesta's time in the barrel”.

In January, Stone was charged with witness tampering, obstruction and making false statements about his interactions with WikiLeaks during the campaign. 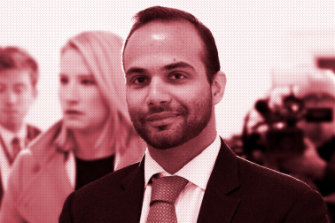 A low-level foreign policy adviser for the Trump campaign, Papadopoulos played a crucial role in kick-starting the FBI's initial investigation into potential collusion between Trump and Russia.

It started when he went for drinks with Australia's then high commissioner in London, Alexander Downer, in May 2016 and told Downer that Russia had dirt on Hillary Clinton. Australian officials then passed on the information to their US counterparts, who started investigating.

Despite telling Downer, a complete stranger, about this, Papadopoulos insists he never passed on his knowledge about Russian hacking to others in the Trump campaign.

Papadopoulos pleaded guilty to making false statements to FBI agents about his contacts with Russian agents during the election and spent 14 days in prison in Wisconsin last year.