That was close! Moment Mini suddenly swerves into the path of family’s SUV on busy London roundabout

This is the shocking moment a motorist almost collides with a Mini Cooper which pulls directly out in front of her while making her way around a busy roundabout.

The Mercedes 350GLE Coupe AMG Line was heading towards the Westfield Shopping Centre when they were almost sideswiped by the smaller car.

The Mini Cooper could not see the road as a truck had correctly stopped on the outside lane to allow the Mercedes to pass. Unfortunately, the Mini shot from the inside lane and pulled across the front of the Mercedes forcing the driver brake heavily. 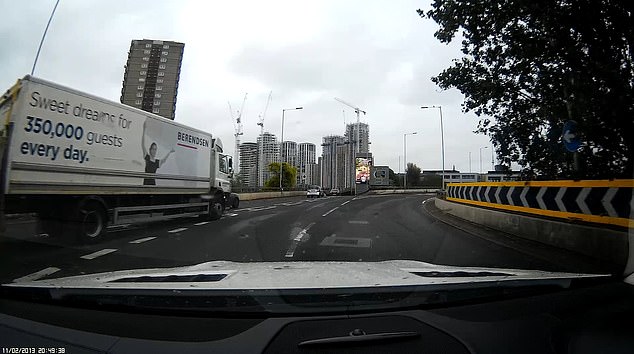 A London GP was a passenger when his wife was driving him and their son to the Westfield Shopping Centre in West London. The Mini Cooper shot out across the roundabout from inside the truck, pictured left 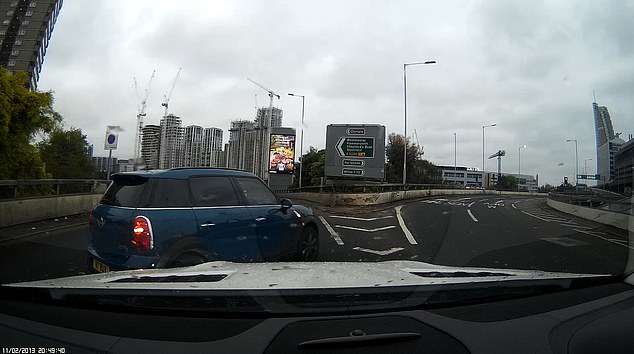 The Mini Cooper, pictured, pulled directly in front of the car, forcing the doctor’s wife to brake heavily to avoid a collision

The London GP and his wife were heading to the shopping centre with their nine-year-old son when they were almost involved in a collision.

He told MailOnline: ‘Near the destination, we took an exit off main A40 on to the Westway Roundabout.

‘From there, we intended to take the second exit to Westfield Shopping Centre keeping the correct lane when this driver suddenly decided to cut in front of us.

‘It happened in split seconds. He appeared to have slowed down momentarily before pulling out. There was not enough time to physically react to the incident. It happened so fast.

‘I still get goosebumps thinking how on earth did we manage to avoid the collision. It ruined our trip as this driver nearly killed us.’ 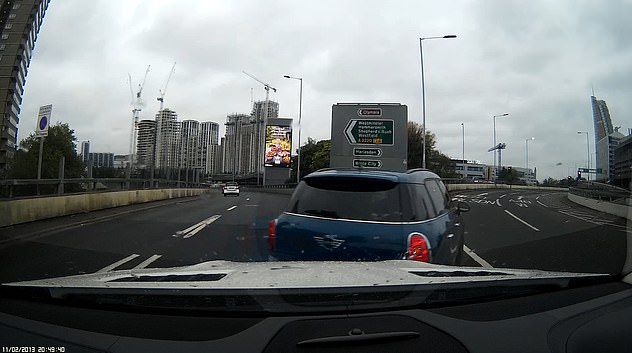