The final steps in Victoria’s history-making treaty process were signed off on Thursday, in a moment that could jump-start some negotiations a year ahead of schedule.

The state government and the First Peoples’ Assembly of Victoria have agreed on a framework that sets up the principles and criteria for negotiating treaty. A statewide treaty could involve negotiating changes to Victoria’s institutional structures and systems of government to provide First Peoples’ right to access and manage land and resources, among other things. 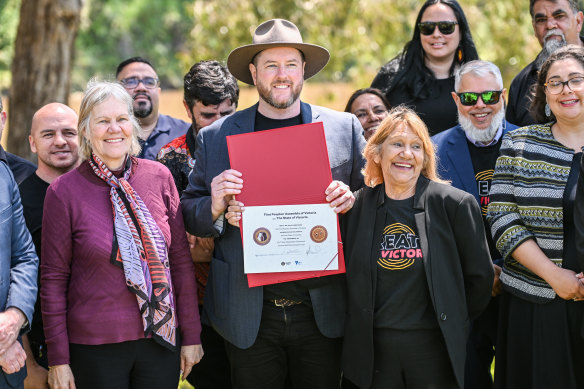 The First Peoples’ Assembly of Victoria and the state government agreed on the terms of the treaty framework on Thursday.Credit:Justin McManus

The statewide treaty cannot be negotiated until the election of the new First Peoples’ Assembly, due by November next year, but the framework could allow traditional owners across Victoria to begin their own treaties process with the state before the end of the year.

The framework sets the ground rules for the independent Treaty Authority, established in August. The authority will facilitate treaty negotiations and resolve disputes between the government and Aboriginal Victorians. A $65 million Self-Determination Fund has also been established to assist traditional owners to prepare for the process.

Assembly co-chair Marcus Stewart, a Nira illim bulluk man of the Taungurung Nation, said the framework represented “the best opportunity for equality at the negotiation table that we’ve seen”.

“It’s uniquely different to what we’ve seen before,” he said. “I mean, you’re never going to be equal with the state in terms of a level playing field because it’s got all the resources. But … it’s a reset of that relationship and something our communities can be proud of.”

Stewart added that he was excited by the potential for treaty negotiations to begin as soon as possible. “It’s something that should have been done 233 years ago, but we’re getting it done now.”

Victoria is the only state or territory that has enacted the voice, truth and treaty elements of the Uluru Statement from the Heart – a 2017 manifesto that demanded a commission to supervise a process of “agreement-making” between governments, widely understood as a reference to treaties and truth-telling.

The First Peoples’ Assembly must go to an election by November 2023 at the latest but could potentially return to the polls early to elect a second assembly that would have the mandate to get negotiations on a statewide treaty under way.

Stewart and his assembly co-chair, Aunty Geraldine Atkinson, signed the agreement on Thursday with acting Minister for Treaty and First Peoples Colin Brooks, stepping in for Premier Daniel Andrews, who has been called away to the flood crisis. 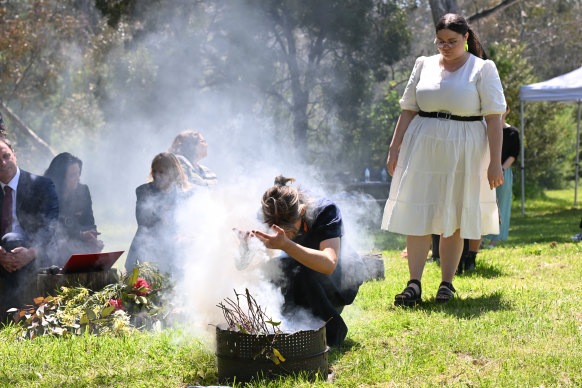 The First Peoples’ Assembly of Victoria is the representative body of traditional owners and First Peoples in the state.Credit:Justin McManus

In a statement, Brooks said: “The success of treaty and truth processes demonstrate what can be achieved under the leadership of First Peoples.”

Atkinson, a Bangerang and Wiradjuri elder, said the agreement on the framework and the fund provided a clear pathway forward for all Victorian traditional owners.

“We all want to get on with creating a better future together as equals, but to do that, we need to eliminate the unfair burden that Aboriginal people have been carrying since invasion,” she said.

“The framework recognises our cultural authority. It will see the government take a back seat as we get to do things our way.”

The latest components buttress the three pieces of treaty “architecture” already in place: the Treaty Authority, the Yoorrook Justice Commission and the Peoples’ Assembly.

The 32-member assembly is the representative body of traditional owners and First Peoples in Victoria. It was established in 2019 and was the first body of its kind in Australia.

In 2020, it called on the state to establish a truth-telling commission to inform and progress the treaty process, which led to the establishment last year of the Yoorrook Justice Commission – Australia’s first truth and justice inquest.

Through its inquiry, an official record of the impact of colonisation in Victoria will be delivered in 2024. The commission will also make recommendations for institutional reforms and actions to address past and ongoing injustices experienced by First Peoples.

The Treaty Authority became the third vital component in the architecture after it was legislated in August. It is the umpire that will oversee all future treaty negotiations. The assembly has described the new body as existing “outside the usual government bureaucracy” and being grounded in culture, lore and law. Its membership will be appointed and announced in coming weeks.

Both the Treaty Authority and the Self-Determination Fund would be functioning within the first quarter of 2023, a spokesperson for the assembly said on Thursday.

The fund will initially receive $65 million to cover its first three years, with funding after that to be negotiated between the state and the assembly. It will be administered by an appointed board of trustees, which is expected to be announced before Christmas.