A survivor of the shooting last month on the University of Virginia campus opened up in an interview on “Good Morning America,” providing his account of what transpired.

The shooting, which took place Nov. 13 on a charter bus that had returned from a field trip, killed three Cavaliers football players, D’Sean Perry, Lavel Davis Jr. and Devin Chandler, and injured two others.

In the interview, running back Mike Hollins said he had just heard the first rounds of gunfire from the suspected shooter, Christopher Darnell Jones Jr., when he pushed his way off the bus.

“Once I got up, and the bus was stopping, is when the gunshots started ringing out,” Hollins said during the interview, which aired Thursday morning. “In that moment, I knew we had to get off that bus because it could get a lot worse. Me and another teammate were the only two to get off the bus. I turned back and I look over my shoulder, and I realize we’re the only two running.

“I didn’t really think much in that moment. It was just literally an instinct and a reaction to go back.”

“I felt so hopeless and so powerless in that moment … I felt him hit me in my back … But I just knew I wasn’t goin’ down without a fight.”

UVA football player talks to @michaelstrahan about surviving shooting that killed three of his teammates. https://t.co/beEbUtpYDipic.twitter.com/OrMgr1PRBQ

Hollins said he came into close contact with the shooter. He added that he and the shooter “locked eyes,” but that the shooter didn’t say anything.

“It was just a cold look,” Hollins said. “I don’t know, it was just like a numb look. … It was so close and I felt so hopeless and powerless in that moment.”

Hollins said he dropped everything and took off running before he felt that he was struck by a bullet.

“I felt him hit me in my back,” Hollins said of a gunshot wound. “But I just knew I wasn’t going down without a fight. I found a pre-med student, and that was God again. She was there to help me, kept me calm, kept my breathing under control, was checking my pulse until the ambulance came. …

“I think I got hit in the small intestine, kidney, and they were trying to see if it damaged my bladder,” Hollins said. “By the grace of God, it missed my spine by like, two centimeters or something like that.” 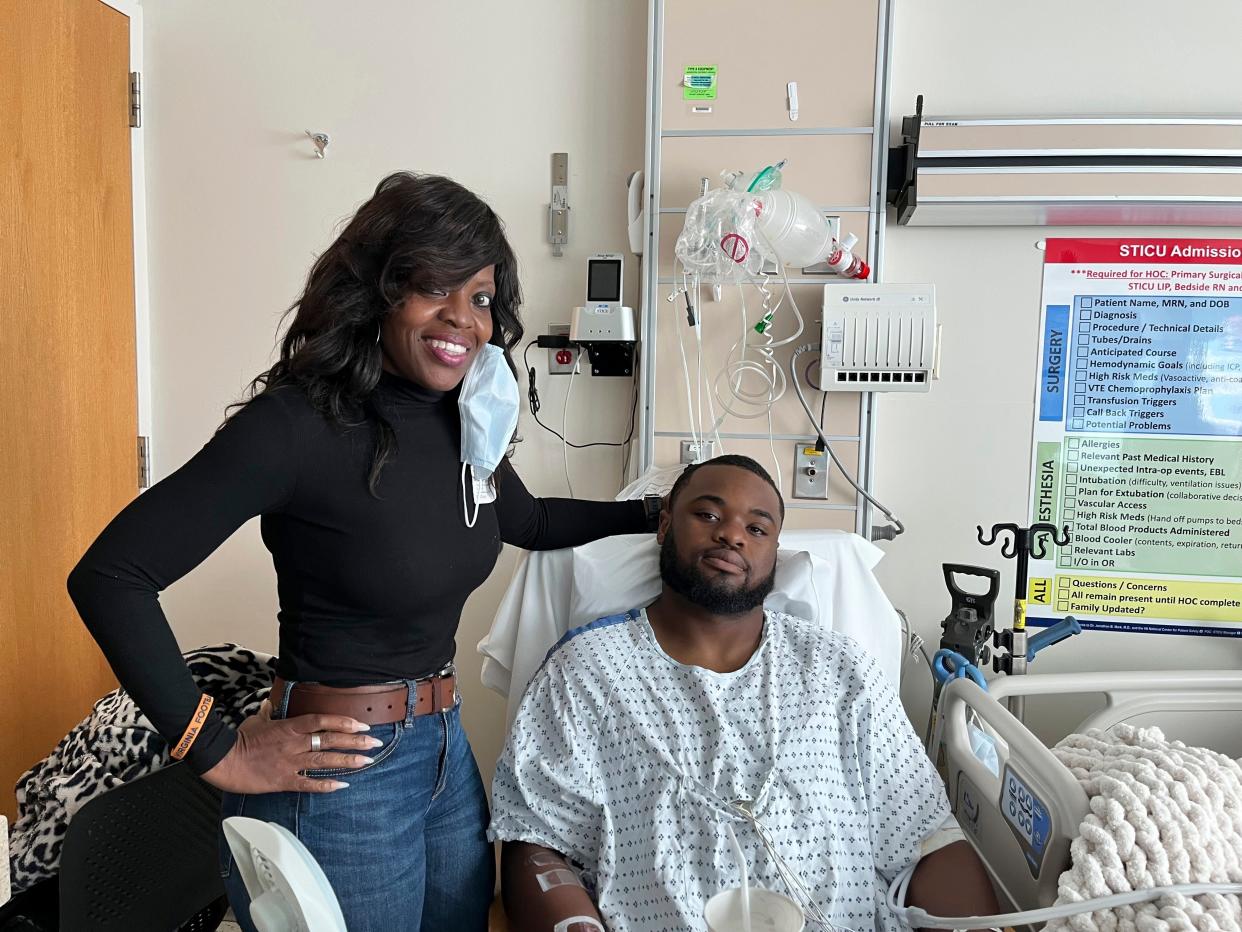 Hollins went into surgery and said he didn’t find out about his slain teammates until two days later.

“I’ve never cried like that before,” Hollins said of the moment he found out. “I mean, I lost a brother that day. I loved Lavel with all my heart. Loved Devin with all my heart. But D’Sean, it was different with him. Man, that was my brother. So it was tragic hearing that he was gone.”

Hollins added that he did not know Jones, who was listed on the UVA football roster during the 2018 season. He said he had seen Jones earlier the day of the shooting, and said he had a “normal” demeanor.

Jones was arrested just before 11 a.m. Nov. 14 in Henrico County, Virginia, about 75 miles southeast of Charlottesville, Henrico Police said in a statement. Jones, 22, had been a student at the university. He faces three counts of second-degree murder and three counts of using a handgun to commit a felony.

“I’ve never been as vulnerable or emotional, but now it’s like, I don’t really care, I can’t control it,” Hollins said of the way the shooting has impacted him. “I’m not afraid to tell my friends and my teammates ‘I love you’ and ‘Looking forward to seeing you again,’ and really meaning it now.”