Package will include six bipartisan bills to fund the departments closed by government shutdown. 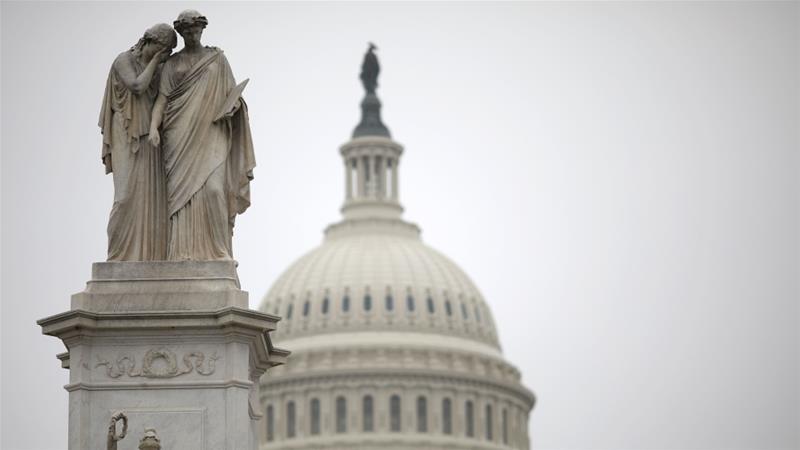 US House Democrats are introducing a package of bills on Monday that would re-open the federal government without approving money for President Donald Trump’s border wall.

The House is preparing to vote as soon as the new Congress convenes on Thursday, as one of the first acts after Democrats take control, according to an aide who was not authorised to discuss the plan and spoke on condition of anonymity.

The package to end the shutdown will include one bill to fund the Department of Homeland Security at current levels, with $1.3bn for border security, through February 8.

The package will also include six other bipartisan bills to fund the departments of Agriculture, Interior, Housing and Urban Development and others closed by the partial shutdown. Some have already passed the Senate. Those bills will provide money through the remainder of the fiscal year, to September 30.

The partial government shutdown is in its second week over Trump’s demand for $5bn for the wall.

Republican senators left for the holidays refusing to vote on any bills until all sides, including Trump, were in agreement.

The president continued to insist he wants to build a wall along the US-Mexico border, despite the assertions of three confidants.

“An all concrete Wall was NEVER ABANDONED,” Trump tweeted on Monday. “Some areas will be all concrete but the experts at Border Patrol prefer a Wall that is see through (thereby making it possible to see what is happening on both sides).”

Trump said he’s waiting in the Oval Office for Democrats to return to Washington and negotiate an end to a partial government shutdown.

Trump says a wall is needed along the whole border to keep out migrants trying to enter the country illegally, casting them as an “invasion” force of dangerous criminals.

On Monday, he called the border “an ‘Open Wound,’ where drugs, criminals (including human traffickers) and illegals would pour into our Country.”

Ball back in Trump’s court

Democrats say the wall idea – one of the president’s key election campaign platforms – is a distraction from more complicated immigration problems and a tool for Trump to whip up support among his conservative base.

Democrats plan to put the ball back in Trump’s court immediately on Thursday by passing a general spending bill which would allow the government to reopen fully, but would not include extra wall construction money, US media reports said.

The bill will go from the Democratic-controlled House to the Republican-held Senate and from there, it would need Trump’s signature.

If he refused, still insisting on the wall funding, Democrats would then get ammunition to accuse him of being responsible for the government shutdown.

Attempts to craft a compromise have so far gained lukewarm support from the two sides.

One proposal would see extra funding for border barriers and other security, while also meeting the Democrats’ demand for work permits for young immigrants referred to as “Dreamers.”