An American B-52 bomber is preparing for an emergency landing at RAF Fairford after burning fuel over Worcestershire following engine failure over the Mediterranean.

It is unclear where the bomber took off but it is thought to have completed a mission in the Mediterranean before suffering engine failure.

The plane is now burning fuel over the UK in order to make a landing at RAF Fairford by 6pm.

The bomber’s flight path shows the jet is still circling between Worcester and Gloucestershire at an altitude of about 14,000ft, according to flight data by ADS-B Exchange. 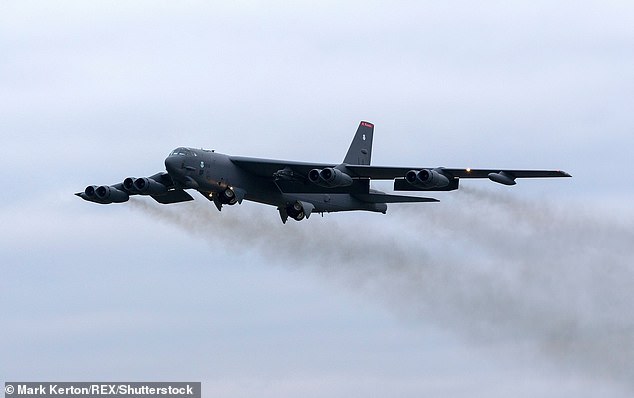 It is unclear if the jet has bombs onboard.

The massive bomber departed Minot AFB, North Dakota ahead of a long-range show of force over the Middle East when it lost one of its eight engines.

The aircraft has been forced to circle for more than three hours to reduce the amount of fuel on board so it can reduce weight to take stress off its landing gear.

A U2 spy plane had earlier landed at RAF Fairfor in Oxfordshire.

A source told MailOnline that the bomber suffered a failure with one of its eight engines.

The long-range, subsonic, jet-powered strategic bomber has been operated by the United States Air Force since the 1950s.

Designed and built by the Seattle-based Boeing Company, the B-52 is a long-range strategic bomber that has been used by the Air Force since the 1950s.

It is capable of carrying up to 70,000 pounds of weapons while flying at a combat range of more than 8,800 miles without aerial refueling.

This heavy bomber is powered by 8 turbofan engines manufactured by Pratt & Whitney.

Each engine is capable of producing 17,000 pounds of thrust to propel the plane forward in the air.

The B-52 also boasts a wingspan of 185ft. Each aircraft has a length measuring 159ft4in. 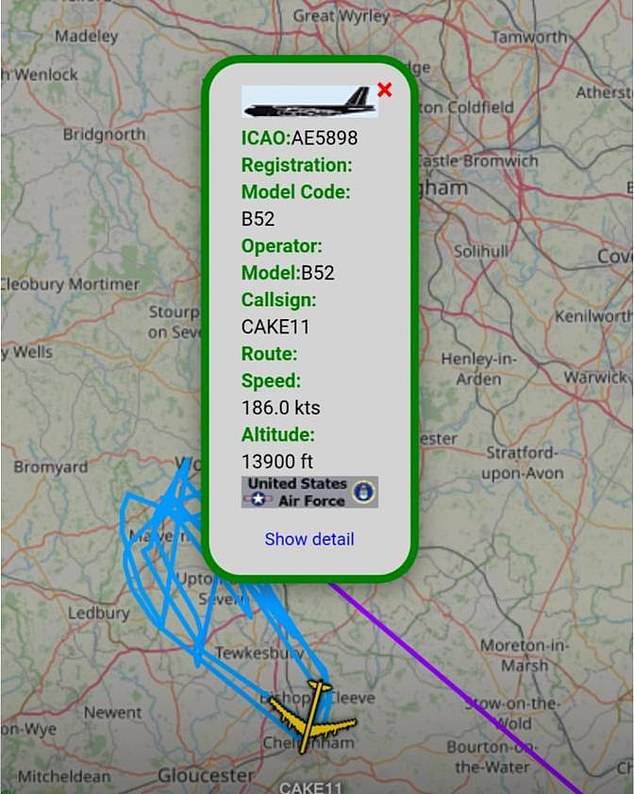 The bomber’s flight path shows the jet is still circling between Worcester and Gloucestershire at an altitude of about 14,000ft, according to flight data by ADS-B Exchange

The plane stands at a height of 40ft8in.

The plane is a subsonic aircraft that can reach speeds of 650mph. It can also fly at a top altitude of 50,000ft.