Up to TWELVE more female BBC employees could be lined up to take the Corporation to a tribunal over gender pay bias, it is revealed as presenter Samira Ahmed’s own battle gets underway

Up to twelve more female BBC employees could launch employment tribunals over over gender pay bias in the wake of Samira Ahmed’s landmark battle, it has been revealed.

The Radio 4 presenter claims she was paid considerably less than her high-profile male colleague Jeremy Vine despite both doing ‘a very similar job’.

She was cheered as she today arrived at the hearing in London, where she has alleged the BBC ‘failed to provide equal pay for equal value work’, according to court documents.

Ms Ahmed was joined by supporters, including BBC journalist Carrie Gracie, who claimed a ‘dozen’ similar cases at the corporation are in the ‘pipeline’ towards a tribunal. 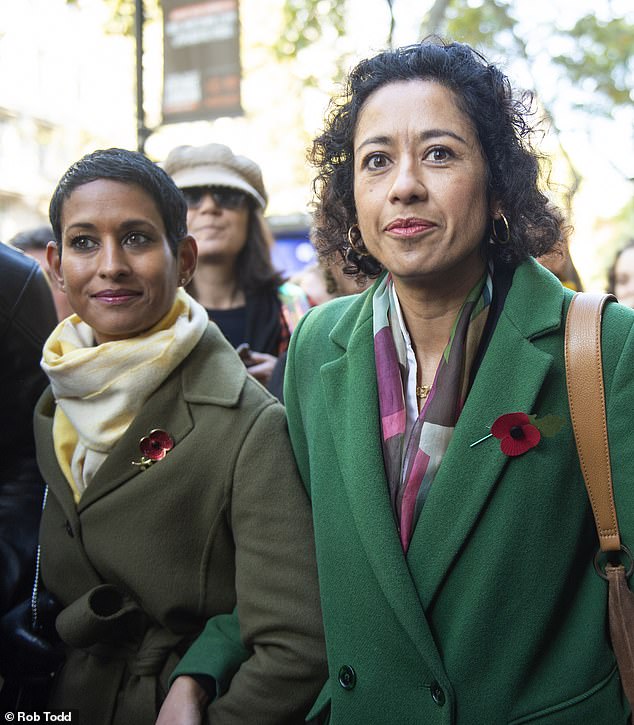 The former China editor – who resigned from her position in January 2018 in protest at pay inequalities and was back-paid the same as the North America editor, whose job she said was comparable to hers at the time – called those taking action ‘extremely brave and determined’.

At the tribunal, Ms Ahmed asked why she was paid £465 per episode of Newswatch – an audience-led critique of coverage by BBC News – while Jeremy Vine was paid up to £3,000 for each episode of Points Of View, work Ms Ahmed described as comparable.

Speaking to reporters at the hearing, Ms Gracie claimed management at the BBC was ‘defensive and resistant to admitting mistakes’, and said Ms Ahmed’s case was ’emblematic and extremely important to all the other women still fighting’.

‘I’m aware of about a dozen cases that are in the pipeline towards a tribunal now,’ she said.

‘It’s a slow pipe, but they are making their way towards tribunal.

‘They’ve come out the end of the internal process and they are not prepared to give up at that point. These are extremely brave and determined people.’

Ms Gracie, who has become a figurehead for other women after she made the announcement in an open letter, added: ‘None of us want this to be a stick with which to beat the BBC.

Ms Gracie said there was a ‘very high degree of solidarity’ among employees at the corporation, adding: ‘We will not be divided and ruled.’ 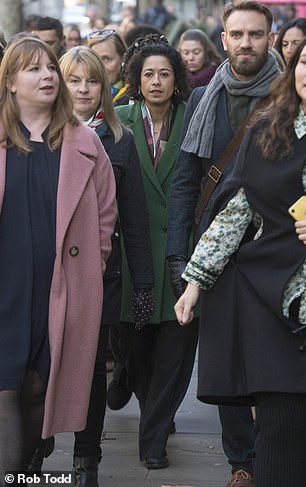 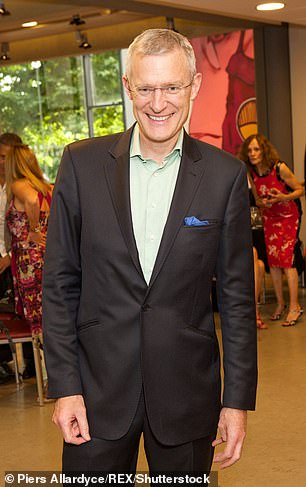 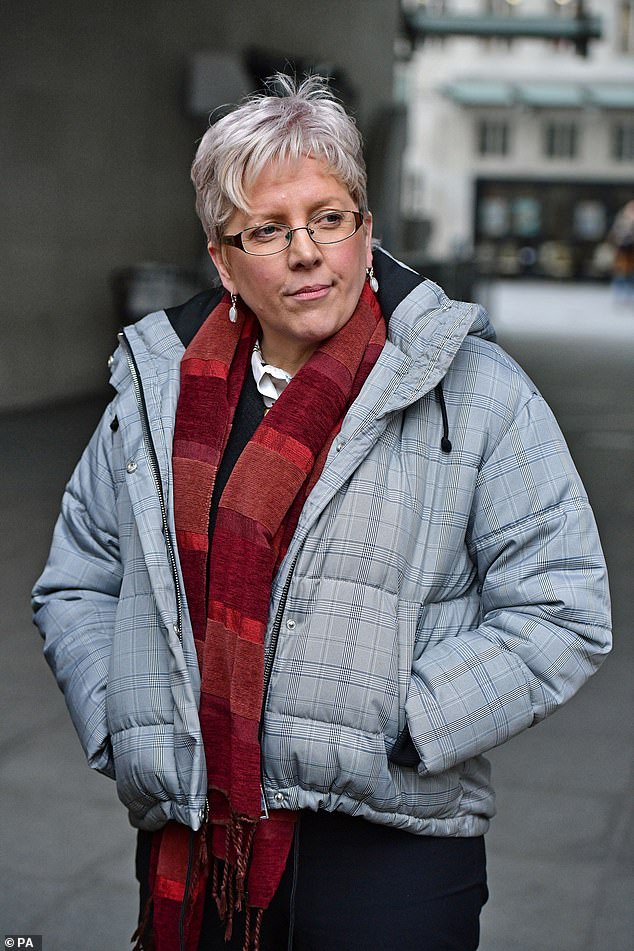 BBC journalist Carrie Gracie, who claimed a ‘dozen’ similar cases at the corporation are in the ‘pipeline’ towards a tribunal

Today’s proceedings were largely taken up by a legal argument over disclosure, with the hearing set to continue on Wednesday.

In a statement ahead of today’s London court clash, Ms Ahmed said: ‘I love my job on Newswatch despite it being difficult and challenging.

‘On the back of my BBC ID card are written the BBC values which include ‘we respect each other and celebrate our diversity’ and ‘we take pride in delivering quality and value for money’.

‘I just ask why the BBC thinks I am worth only a sixth of the value of the work of a man for doing a very similar job.’ 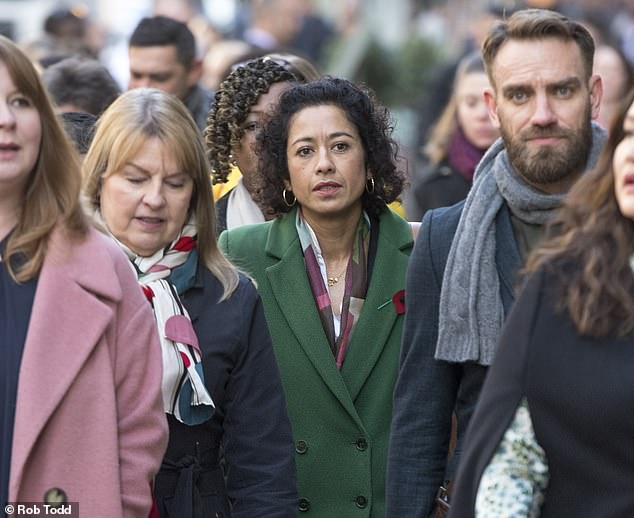 Arriving at the hearing in London today, the presenter was flanked by supporters including broadcaster Aasmah Mir and former former BBC newsreader Maxine Mawhinney (left)

Ms Ahmed has been backed by broadcaster Sandi Toksvig and lawyer Baroness Sayeeda Warsi, among others.

Michelle Stanistreet, NUJ general secretary, said: ‘The scourge of unequal pay has no place in our public service broadcaster and that’s why the NUJ is backing Samira’s case and many others.

In June, three female broadcasters smashed the BBC gender pay ceiling by entering the top 10 list of earners at the corporation.

Their climb up the salary ladder came after the embattled BBC was accused of peddling a gender pay gap by Prime Minister Theresa May and several of its own stars.

But after the BBC was rocked by a string of unequal pay rows, it was forced to tighten its belt when offering its male stars contracts, which has seen the likes of Humphrys take pay cuts.

‘Unfortunately, despite Samira going through a lengthy and frustrating internal process in the hope that a sensible solution could be achieved, the BBC has not resolved this case and it will now be for the tribunal to determine whether this monumental pay gap is appropriate and defensible.

‘Samira is to be congratulated for her persistence and determination to secure fair and equal treatment by her employer.’

Ms Ahmed has been among the female talents at the BBC to voice their concerns over pay equality following the scandal over Ms Gracie’s salary.

In a statement, a BBC spokesman said: ‘The BBC is committed to equal pay. Points Of View is an entertainment programme with a long history and is a household name with the public.

‘Newswatch – while an important programme – isn’t. Samira was paid the same as her male predecessor when she began presenting Newswatch.

‘Gender has not been a factor in levels of pay for Points Of View.

‘News and entertainment are very different markets and pay across the media industry reflects this.’

The hearing, to be held at the Central London Employment Tribunal, is listed to last for seven days. 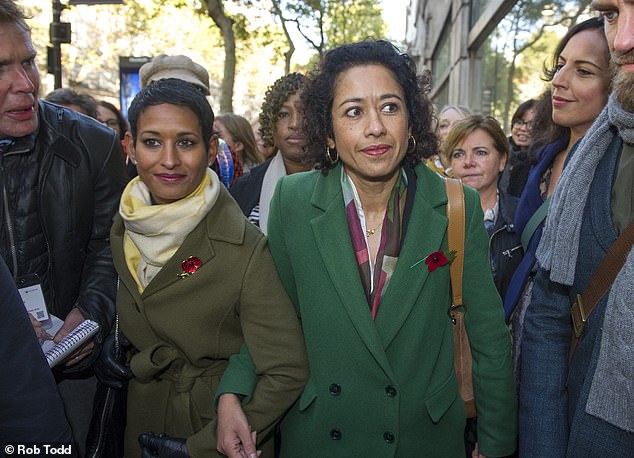