Marrakesh:  United Nations members have adopted a controversial pact aimed at improving the way world copes with rising migration, but almost 30 countries stayed away from the ceremony in Morocco.

The pact, meant to foster cooperation on migration, was agreed in July by all 193 UN members except the United States, but only 164 formally signed it at the meeting.

At least nine countries, including the United States, pulled out of the accord – many citing a possible threat to national sovereignty. 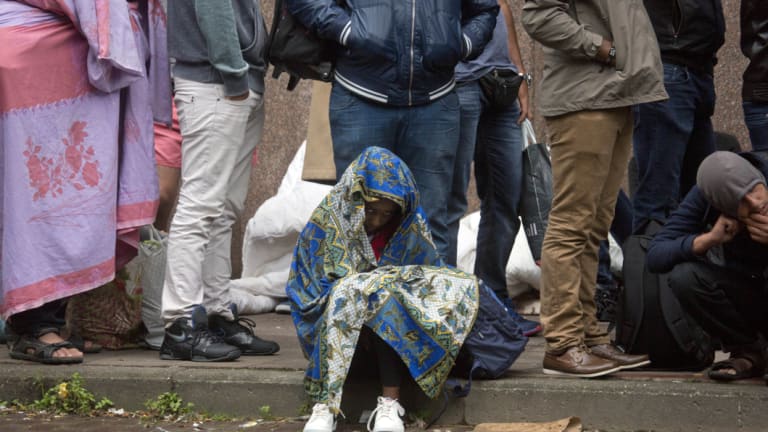 A young child waits in line at a migrant reception center in Brussels. Belgian migration minister Theo Francken said he wants no part of a United Nations pact on safe and orderly migration.Credit:AP

Australia said it would not sign up to a deal it said would compromise its hardline immigration policy.

King Mohammed VI of Morocco, the meeting's host, said "repressive" migration policies only served to slow the movement of people – not stop it – and insisted no country could go it alone in dealing with waves of migration.

The north African monarch didn't attend but sent word through his Prime Minister that "no single country can, on its own, face up to such a challenge." 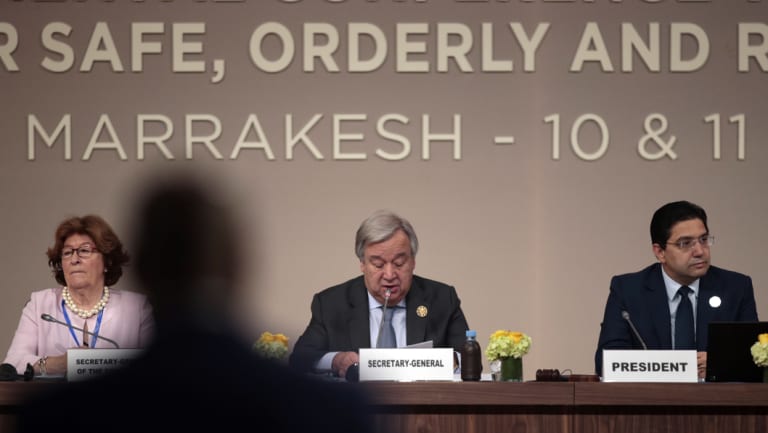 The king defended the rights of migrants to access basic services in countries of transit and destination.

Morocco is a major hub for migrants who try to flee poverty in sub-Saharan Africa and reach Europe.

With a record 21.3 million refugees globally, the United Nations began work on the non-binding pact after more than 1 million people arrived in Europe in 2015, many fleeing civil war in Syria and poverty in Africa.

Since July, the accord, which addresses issues such as how to protect migrants, integrate them and send them home, has been criticised by mostly right-wing European politicians who say it could increase immigration from African and Arab countries. 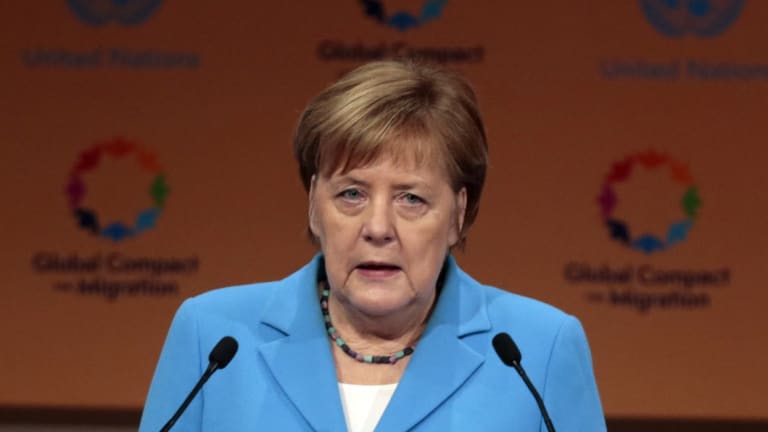 Angela Merkel, accused by critics of worsening the refugee crisis by opening Germany's borders in 2015, said cooperation was the only answer to tackle the world's problems.

"The pact is worth fighting for," the German chancellor, one of around a dozen national leaders in Marrakesh, told the forum. "It's about time that we finally tackle migration together."

Without naming US President Donald Trump or his "America First" stance, she said multilateralism was the way "to make the world a better place".

Trump’s administration said the global approach to the issue was not compatible with US sovereignty.

"In the many places where fertility is declining and life expectancy is rising, economies will stagnate and people will suffer without migration," he said in his opening address.

"It is clear that most developed countries need migrants across a broad spectrum of vital roles, from caring for elderly people to preventing the collapse of health services," he said.

On Sunday, Chile withdraw from the pact saying "migration was not a human right", while Belgian Prime Minister Charles Michel saw the biggest party in his coalition quit in a dispute over the accord.

In November, Austria's right-wing government, which holds the EU presidency, said it would withdraw, saying the pact would blur the line between legal and illegal migration.

Several countries in formerly Communist Eastern Europe pulled out. Six more, among them Israel and Bulgaria, were debating whether to quit, a UN spokesman said after the pact was adopted. He did not say whether the rest of the countries absent from the conference in Marrakesh might also pull out.

A top humanitarian leader admits governments have a right to set migration policy, but insist they shouldn't increase suffering or play into a recent trend toward the "criminalisation of compassion."

Francesco Rocca, president of the International Federation of Red Cross and Red Crescent Societies, said the pact was about "dignity" of people who face human traffickers, sexual exploitation and other abuse while on the move.

Rocca said the Global Compact on Migration would try to fix "a global approach to migration that is broken."

"We don't want to interfere in domestic policies, honestly we don't care. We only care about the dignity for these human beings."

"Too many people are dying. Too many are suffering."