‘Earth is sending us a distress signal’: UN chief warns past eight years have been hottest on record

The past eight years were the hottest on record and should be seen as a ‘distress signal’ from planet Earth, the UN Secretary General warned yesterday.

The global temperature is now estimated to be around 1.15C higher than between 1850 and 1900, according to a report from the UN’s World Meteorological Organisation (WMO).

It means that the target to limit global warming to 1.5C is now ‘barely within reach’ amid warnings of rising sea levels and extreme weather conditions. The annual State of the Global Climate report added that this year alone could be the fifth warmest on record.

Speaking ahead of the Cop27 summit in Egypt, Antonio Guterres said: ‘We must answer the planet’s distress signal with action – ambitious, credible climate action. Cop27 must be the place – and now must be the time.’ 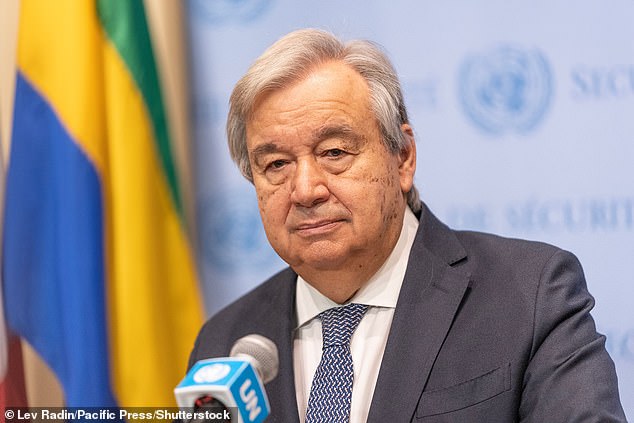 The past eight years were the hottest on record and should be seen as a ‘distress signal’ from planet Earth, the UN Secretary General warned yesterday

The Earth’s temperature is entering dangerous territory, with the UK hitting 40C for the first time.

Mr Guterres said: ‘As COP27 gets under way, our planet is sending a distress signal. The latest State of the Global Climate report is a chronicle of climate chaos.’

WMO secretary-general Petteri Taalas said the Paris agreement to limit global warming to 1.5c was at risk of failing. He said: ‘The greater the warming, the worse the impacts.

‘We have such high levels of carbon dioxide in the atmosphere now that the lower 1.5C of the Paris Agreement is barely within reach.

’The WMO added in a statement ‘a lack of action has led to warnings that the 1.5C goal is slipping away’.

At the summit, nations attempt to take action to reduce greenhouse gases, which result from burning oil, coal, gas farming and deforestation. But the three main greenhouse gases, carbon dioxide, methane and nitrous oxide have all risen to record levels, the report said.

At current rates, the Earth will warm by 2.6-2.8c by 2100, UN scientists warn. The WMO report shows 2022 will likely be the fifth or sixth warmest year on record.

It would be warmer if it were not for a weather phenomenon called La Nina, which has cooled global temperatures for the past two years.

Detailing the devastation to glaciers, the report said glaciers in the European Alps, lost on average three to four metres of ice thickness throughout the mountain range – substantially more than the previous record year of 2003. 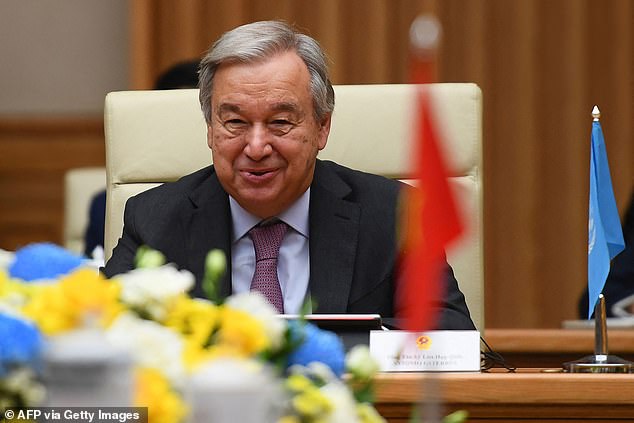 Mr Guterres said: ‘As COP27 gets under way, our planet is sending a distress signal. The latest State of the Global Climate report is a chronicle of climate chaos’

The report said between 2001 and 2022, glacier ice in Switzerland has declined by more than a third. Since January 2020, sea levels have risen by nearly 10mm (0.4 inches) to a new record high this year.

Ocean heat was at record levels in 2021, the last year assessed, while this year Arctic sea ice extent was below the long term average for most of the year. Antarctic sea ice dropped to its lowest level on record in February.

Leading climate scientist Professor Sir Brian Hoskins, chairman of the Grantham Institute at Imperial College London, said: ‘One detail sums it up: Switzerland has lost more than a third of its glacier volume since 2001.

‘How much more warning do they need before the countries of the world will move from talk and promises to real action?’