Smoke was seen billowing through the air this morning following the attack, which came despite frantic attempts from Putin’s forces to shoot down the UAV.

It is the latest in a string of mystery blasts, widely believed to be inflicted by Ukrainian forces, deep in the occupied peninsula.

It follows a huge blast at a Russian air base in Crimea last week. Western officials have now revealed the incident knocked out half of Russia’s Black Sea naval aviation force.

A source said: ‘They’ve lost their flagship Moskva, they lost Snake Island, they lost half of their naval aviation package and their military headquarters was struck. I think we can assume attacks by Ukrainians behind enemy lines.’ 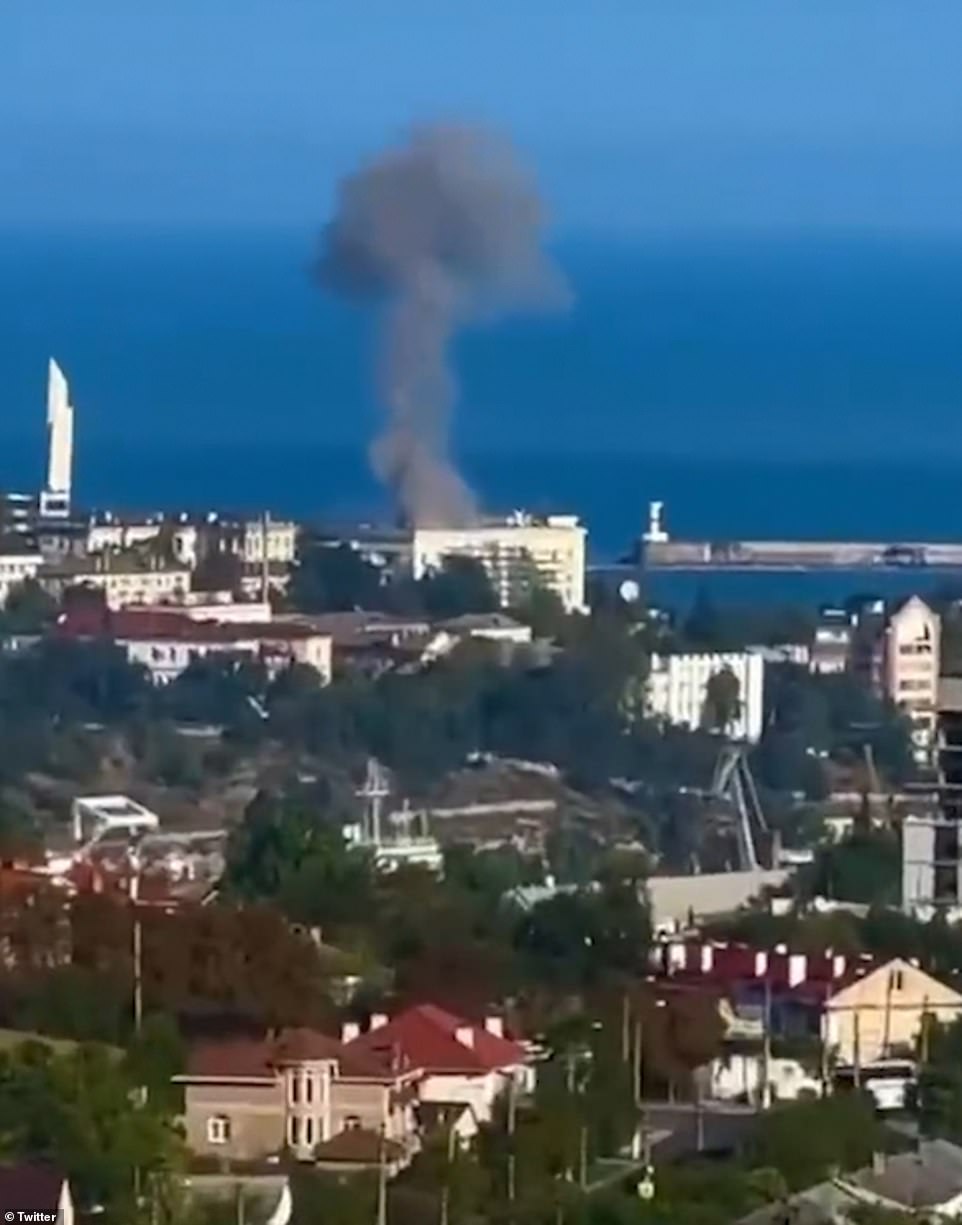 The explosions were reported at an air base near the village of Belbek, on the south-west coast near Sevastopol, HQ of Vladimir Putin’s Black Sea fleet.

On the opposite end of the peninsula, the sky has been lit up at Kerch near a huge bridge to Russia, with what Moscow has claimed was fire from its air defences.

Inside Russia, two villages have been evacuated after explosions at an ammunition dump in Belgorod province, more than 60 miles from territory controlled by Ukrainian forces.

Kyiv also announced a strike on a bridge at the Kakhovska Dam, near Kherson – one of the last routes for Russia to supply its troops on the west bank of the Dnipro River.

Such attacks were having a ‘significant psychological effect on the Russian leadership’, said the official.

Russia has denied any aircraft were damaged in what it called an accident at the base, although satellite pictures showed at least eight warplanes completely burned out.

In response to the attacks, Putin sacked his Black Sea naval commander earlier this week.

The removal of Igor Osipov marked the most prominent sacking of a military official in the nearly six months since Russia launched its war on Ukraine.

State-owned RIA said the new chief, Viktor Sokolov, was introduced to members of the fleet’s military council in the port of Sevastopol.

One source said it was ‘normal’ that the appointment was not publicly announced at a time when Russia is conducting what it calls its special military operation in Ukraine.

Speculation has followed that Osipov was sacked following the sinking of the Moskva flagship on April 14, but the naval commander appears to have kept his job until recently.

Osipov was absent from the Red Square ‘victory parade’, with Moscow claiming he was ‘not in the mood’ to appear following the loss of the flagship.