Russia has accused the US of helping Ukraine to develop bioweapons near its border as part of a renewed attempt to justify Vladimir Putin’s invasion of the country.

Maria Zakharova, spokesman for Russia’s foreign ministry, was wheeled in front of TV cameras today to parrot claims from state-backed media that Ukraine was operating a banned WMD programme which prompted Putin to give the order to attack.

Zakharova claimed Russian troops have found ‘evidence’ that the US and Ukraine were jointly running labs on Russia’s border containing samples of ‘cholera and other pathogens’ to be used in weapons – though she did not present any of the ‘evidence’.

It appears to be the Kremlin’s latest attempt to justify Putin’s war, after false flag operations in the Donbass region and claims of ‘genocide’ against civilians fell flat – with the US warning well in advance that these would be used as pre-texts. 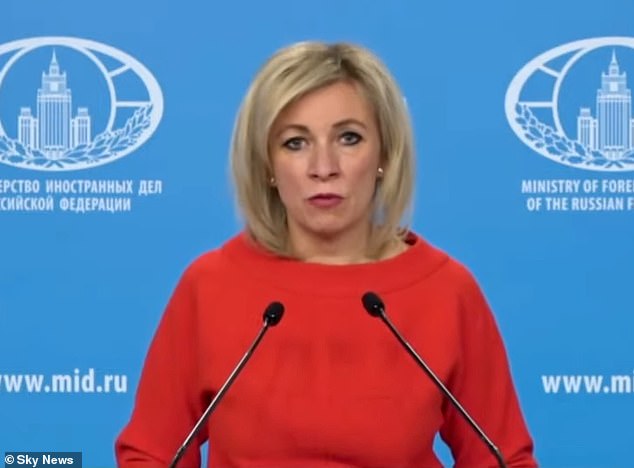 Maria Zakharova, spokesman for Russia’s foreign ministry, parroted claims from state-backed media that the US was helping Ukraine develop bioweapons in an attempt to justify Putin’s war

Zakharova, speaking in Moscow today, claimed that Russia has uncovered communications between the US and Ukraine ‘looking for opportunities to develop [biological] weapons’ with funding from Washington.

She claimed, again without evidence, that orders had been given to staff of those labs to start destroying samples of viruses including ‘cholera and other pathogens’ on February 24 – conveniently linking it with the date of Putin’s order to attack.

It follows reports in both Russian and Chinese state-owned media that has pushed the claims backed by ‘documents’ – one of which appeared to be a fact-sheet about a vet clinic based in Luhansk.

Zhao Lijian, China’s foreign ministry spokesman who took a prominent role spreading misinformation about the origins of Covid during the pandemic, has also parroted the claims in recent days.

The kernel of truth at the centre of Russia’s claims is that the US does help Ukraine to run biolabs, but they are in fact biosafety labs – designed to detect and track outbreaks of disease that could pose a security risk.

The focus on WMDs in Ukraine appears to be part of an attempt to justify the invasion of Ukraine by comparing it to the 2003 US-led invasion of Iraq.

As part of the pre-text for the invasion, the Bush White House claimed Saddam Hussein had stockpiled WMDs and might use them in attacks on minority groups – as he had done against the Kurds at Halabja in 1988. No WMDs were ever discovered.

Moscow has stepped up retroactive efforts to justify the war amid near-total international condemnation, tougher-than-expected western sanctions, and fighting that has proved far bloodier than the Kremlin anticipated.

A UN ballot to denounce the invasion last week produced a record 143 votes against with 35 abstentions – including the likes of China, Venezuela and Cuba which typically vote with Russia.

Aside from Russia itself, just four countries voted against: Belarus, North Korea, Eritrea and Syria.

That has been followed by Western sanctions that have gone deeper and harder at Russia’s economy than experts had predicted – with its hugely valuable energy sector taking a battering this week.

America has announced a total ban on imports of Russian oil and gas, the UK has cut off oil supplies, and the EU has announced a plan to wean itself off of imports by 2030 in what would be a hammer-blow to Moscow if it comes to pass.

Russia is now the world’s most-sanctioned country, ahead even of the likes of ‘Hermit Kingdom’ North Korea and America’s arch-nemesis Iran.

Meanwhile Western companies have been scrambling to exit the Russian economy, with iconic brands such as McDonald’s, Coca-Cola and Ikea all shutting up shop.

The ruble is now worth less than a US cent, and Russia’s stock market has been closed for a week – amid suspicion that it may not reopen any time soon. Vladimir Putin has faced criticism at home over the war, with politicians said to have privately branded the invasion a ‘clusterf***’

On the battlefield, things have also gone against Russia in ways the Kremlin appears not to have foreseen.

Early assaults with light formations of infantry and tanks – apparently in the hopes that the Ukrainian military would simply fold – were destroyed with heavy Russian losses, forcing Putin to resort to siege tactics by bombing cities into submission.

Kyiv’s commanders say the Russian advance has now stalled and come to a near-complete stop, having failed to achieve many of its early objectives.

Ukraine estimates Russian losses at 12,000 men. That cannot be verified, but the total will almost certainly be higher than Putin bargained for.

Even if Russia’s much-larger military can overcome Ukraine’s by sheer weight of numbers, it faces the daunting task of trying to occupy a country whose population have shown a bloody-minded willingness to resist.

It would leave Moscow’s men fighting a deeply-entrenched insurgency, sapping Russia’s economic resources at a time when sanctions begin to bite hard.

Privately, political figures and powerful businessmen in Russia are said to be describing the invasion as a ‘clusterf***’ which they never expected Putin to go through with.

Anti-war protests have also erupted, leading some to predict that Putin’s ‘miscalculation’ in Ukraine could lead to the fall of his regime.