Harrowing photos show corpses being put in body bags and dumped in mass graves after Putin’s forces shelled a children’s hospital in Ukraine.

Graphic images show mortuary workers digging trenches 25m long at one of the old cemeteries in the besieged port city of Mariupol, and making the sign of the cross as they pushed dead bodies wrapped in carpet or bags over the edge.

Ukrainian officials said at least 17 people were wounded in a Russian airstrike on a maternity and children’s hospital, while more than 1,200 civilians in Mariupol are thought to have been killed as Moscow ‘terrorises’ the captive population with increasingly brutal attacks.

The ground shook more than a mile away when the Mariupol complex was hit by a series of blasts that blew out windows and ripped away much of the front of one building. Police and soldiers rushed to scene to evacuate victims, carrying out a heavily pregnant and bleeding woman on a stretcher.

Another woman wailed as she clutched her child. In the courtyard, mangled cars burned, and a blast crater extended at least two stories deep.

Volodymir Nikulin, a top regional police official, accused Putin’s regime of committing a ‘huge’ war crime ‘without any justification’. Joe Biden’s administration condemned the ‘barbaric’ attack, while the UN and the World Health Organisation said no hospital ‘should ever, ever be a target’.

Ukraine’s hardened president Volodymyr Zelensky wrote on Twitter that there were ‘people, children under the wreckage’ and called the strike an ‘atrocity’. Video shared by the comic-turned-wartime leader showed cheerfully painted hallways strewn with twisted metal.

Britain’s prime minister Boris Johnson condemned Russia’s ‘depraved’ attack on the ‘vulnerable and defenceless’, adding that Putin will be held ‘to account for his terrible crimes’.

Authorities, meanwhile, announced new ceasefires Wednesday morning to allow thousands of civilians to escape bombarded towns around Kyiv as well as the cities of Mariupol, Enerhodar and Volnovakha in the south, Izyum in the east and Sumy in the northeast.

It was not immediately clear whether anyone was able to leave other cities, but people streamed out of Kyiv’s suburbs, many headed for the city centre, as explosions were heard in the capital and air raid sirens sounded repeatedly. 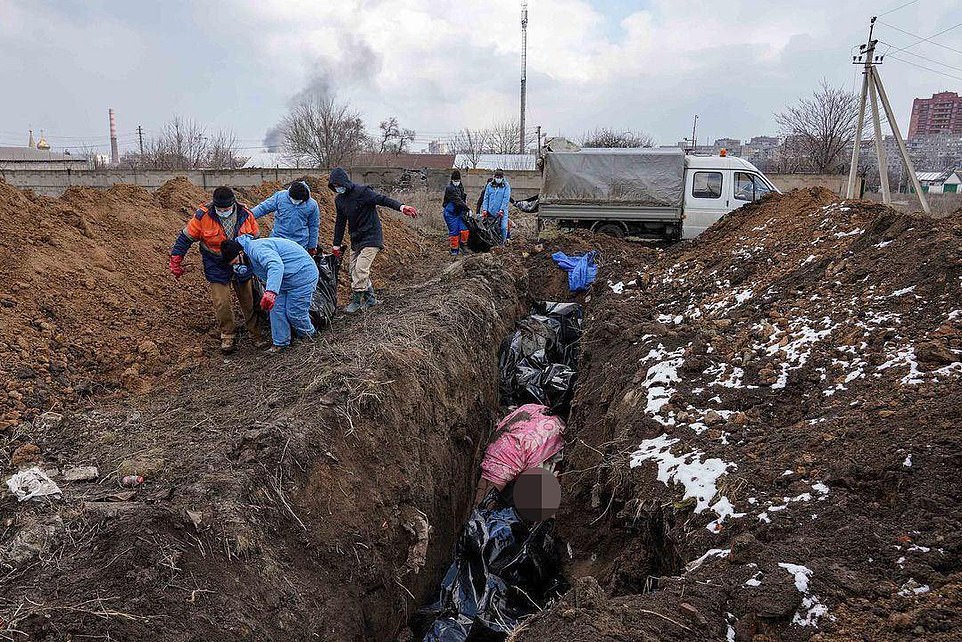 Graphic images show mortuary workers digging trenches 25m long at one of the old cemeteries in the besieged port city of Mariupol, and making the sign of the cross as they pushed dead bodies wrapped in carpet or bags over the edge 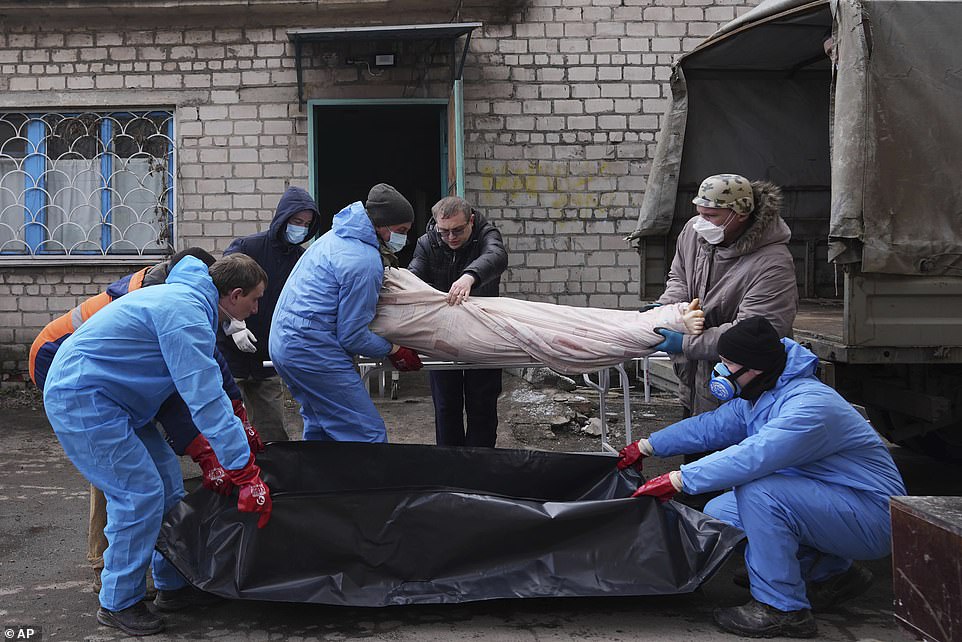 Mortuary workers move a dead body into a plastic bag in the outskirts of Mariupol, March 9, 2022 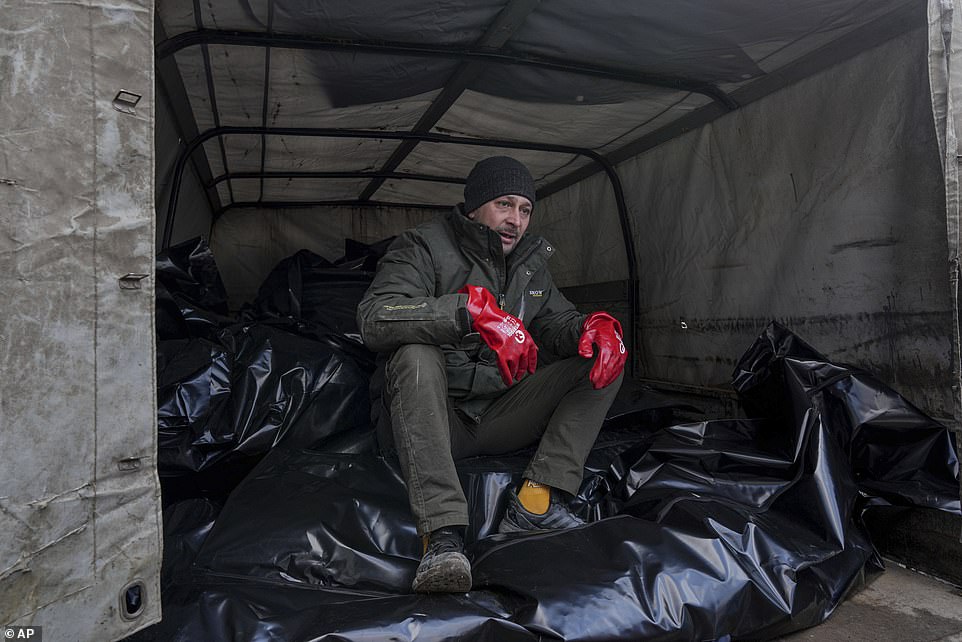 A mortuary worker sits on body bags before they were transported to the outskirts of Mariupol, March 9, 2022 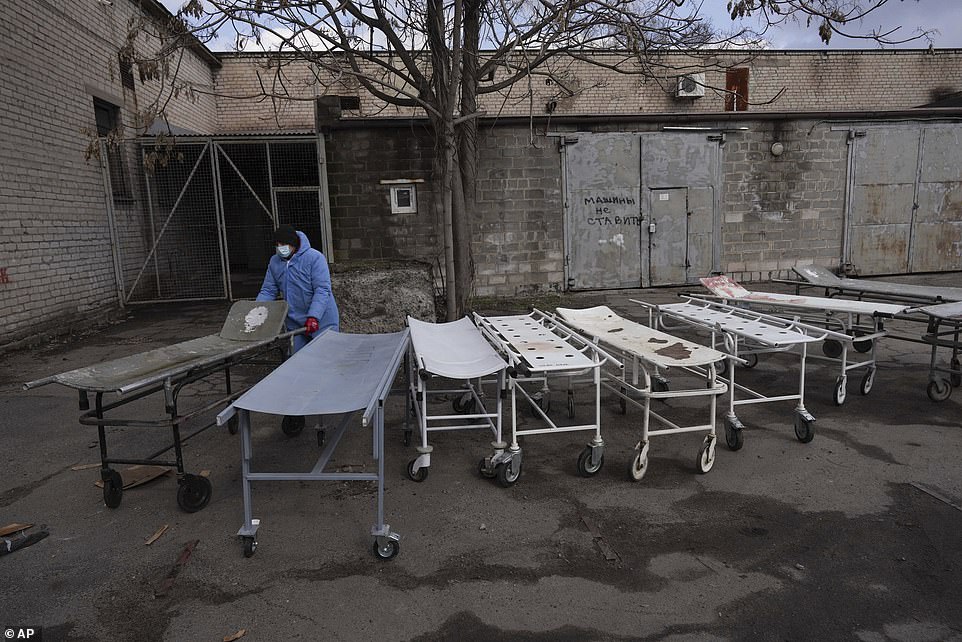 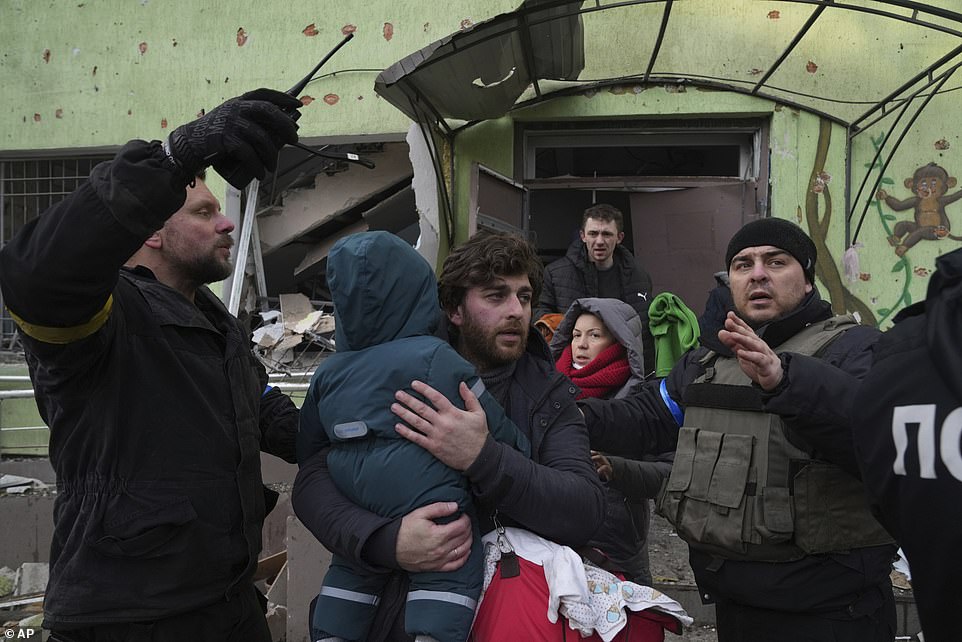 A man carries his child away from the damaged by shelling maternity hospital in Mariupol, March 9, 2022 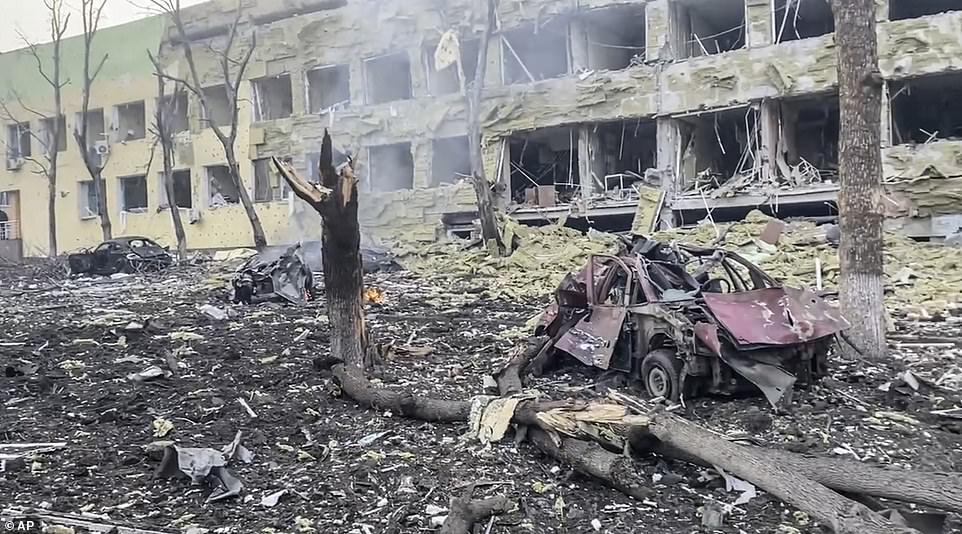 This image taken from video provided by the Mariupol City Council shows the aftermath of Mariupol Hospital after an attack, in the besieged port city of Mariupol, March 9, 2022 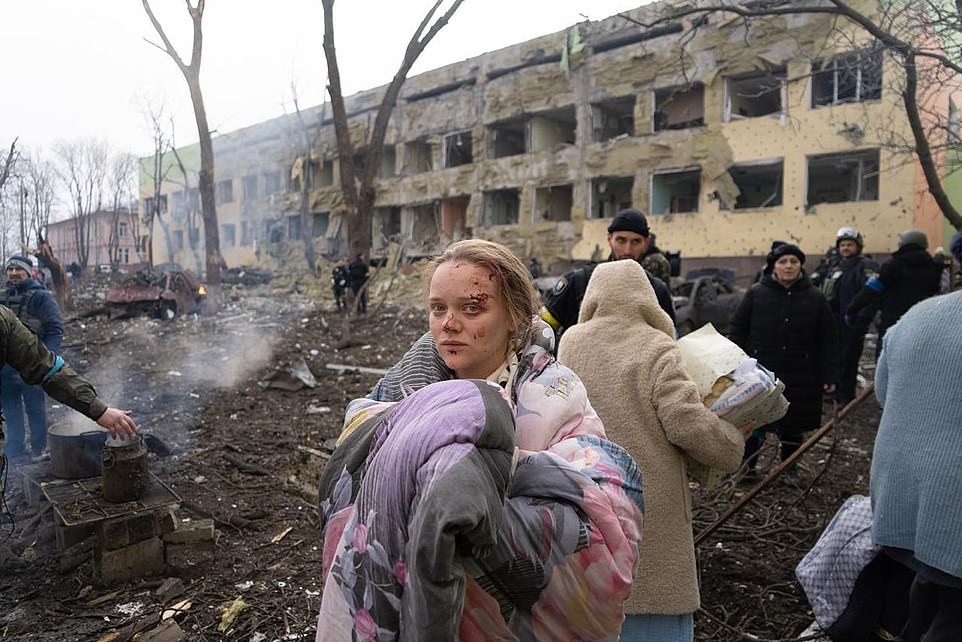 Calling upon that human spirit, we are supporting a huge push to raise money for refugees from Ukraine.

For, surely, no one can fail to be moved by the heartbreaking images and stories of families – mostly women, children, the infirm and elderly – fleeing from the bombs and guns.

As this tally of misery increases over the coming days and months, these innocent victims of this conflict will require accommodation, schools and medical support.

Donations to the Mail Force Ukraine Appeal will be used to help charities and aid organisations providing such essential services.

From there, the evacuees planned to board trains bound for western Ukrainian regions not under attack.

Civilians leaving the Kyiv suburb of Irpin were forced to make their way across the slippery wooden planks of a makeshift bridge, because the Ukrainians blew up the concrete span leading to Kyiv days ago to slow the Russian advance.

With sporadic gunfire echoing behind them, firefighters dragged an elderly man to safety in a wheelbarrow, a child gripped the hand of a helping soldier, and a woman inched her way along, cradling a fluffy cat inside her winter coat. They trudged past a crashed van with the words ‘Our Ukraine’ written in the dust coating its windows.

‘We have a short window of time at the moment,’ said Yevhen Nyshchuk, a member of Ukraine’s territorial defense forces. ‘Even if there is a cease-fire right now, there is a high risk of shells falling at any moment.’

Previous attempts to establish safe evacuation corridors over the past few days largely failed because of what the Ukrainians said were Russian attacks. But Putin, in a telephone call with Germany’s chancellor, accused militant Ukrainian nationalists of hampering the evacuations.

In Mariupol, a strategic city of 430,000 people on the Sea of Azov, local authorities hurried to bury the dead from the past two weeks of fighting in a mass grave. Nationwide, thousands are thought to have been killed, both civilians and soldiers, since Putin’s forces invaded.

The UN estimates more than 2million people have fled the country, the biggest exodus of refugees in Europe since the end of World War II.

The fighting knocked out power to the decommissioned Chernobyl nuclear plant, raising fears about the spent radioactive fuel that is stored at the site and must be kept cool. But the UN nuclear watchdog agency said it saw ‘no critical impact on safety’ from the loss of power.

The crisis is likely to get worse as Moscow’s forces step up their bombardment of cities in response to what appear to be stronger Ukrainian resistance and heavier Russian losses than anticipated.

Echoing remarks from the director of the CIA a day earlier, British Defence Secretary Ben Wallace said Russia’s assault will get ‘more brutal and more indiscriminate’ as Putin tries to regain momentum.

The UK’s Ministry of Defence said fighting continued northwest of Kyiv. The cities of Kharkiv, Chernihiv, Sumy and Mariupol were being heavily shelled and remained encircled by Russian forces.

Russian forces are placing military equipment on farms and amid residential buildings in the northern city of Chernihiv, Ukraine’s military said. In the south, Russians in civilian clothes are advancing on the city of Mykolaiv, a Black Sea shipbuilding centre of a half-million people, it said.

The Ukrainian military, meanwhile, is building up defences in cities in the north, south and east, and forces around Kyiv are ‘holding the line’ against the Russian offensive, authorities said.

On Wednesday, some of Ukraine’s volunteer fighters trained in a Kyiv park with rocket-propelled grenade launchers.

‘I have only one son,’ said Mykola Matulevskiy, a 64-year-old retired martial arts coach, who was with his son, Kostyantin. ‘Everything is my son.’

But now they will fight together: ‘It’s not possible to have it in another way because it’s our motherland. We must defend our motherland first of all.’ 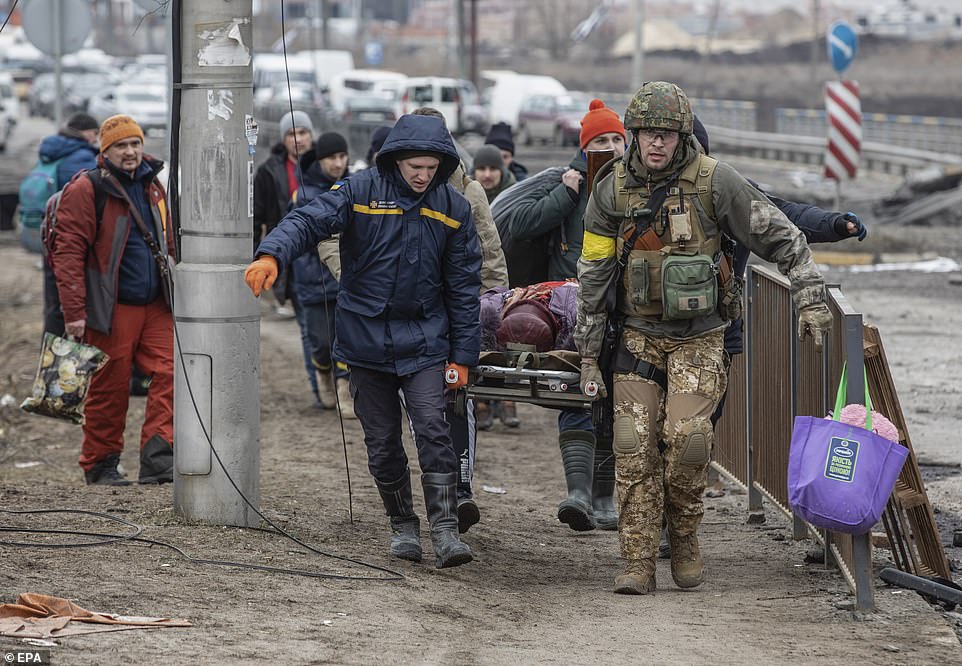 Residents cross the destroyed bridge as they flee from the frontline town of Irpin, Ukraine, March 9, 2022 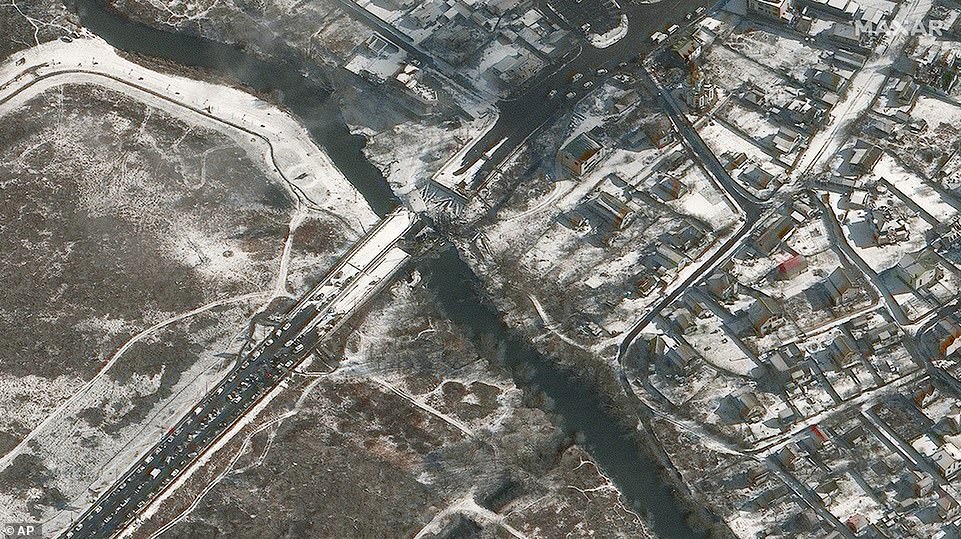 A satellite image taken on Tuesday but released Wednesday shows the destroyed road bridge on the outskirts of Irpin, near the Ukrainian capital Kyiv, which refugees have been using to flee the besieged city 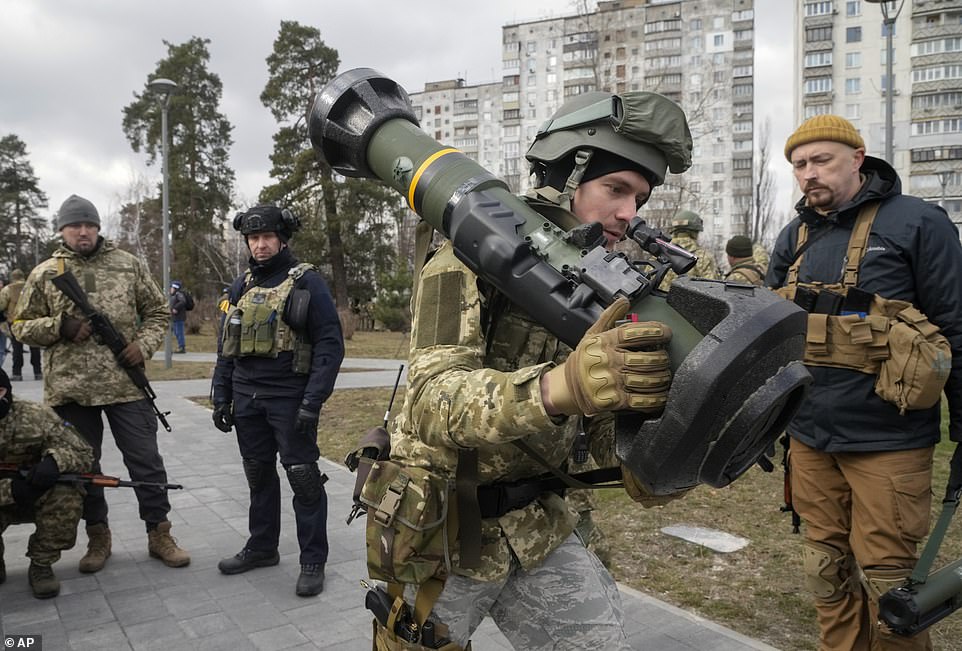 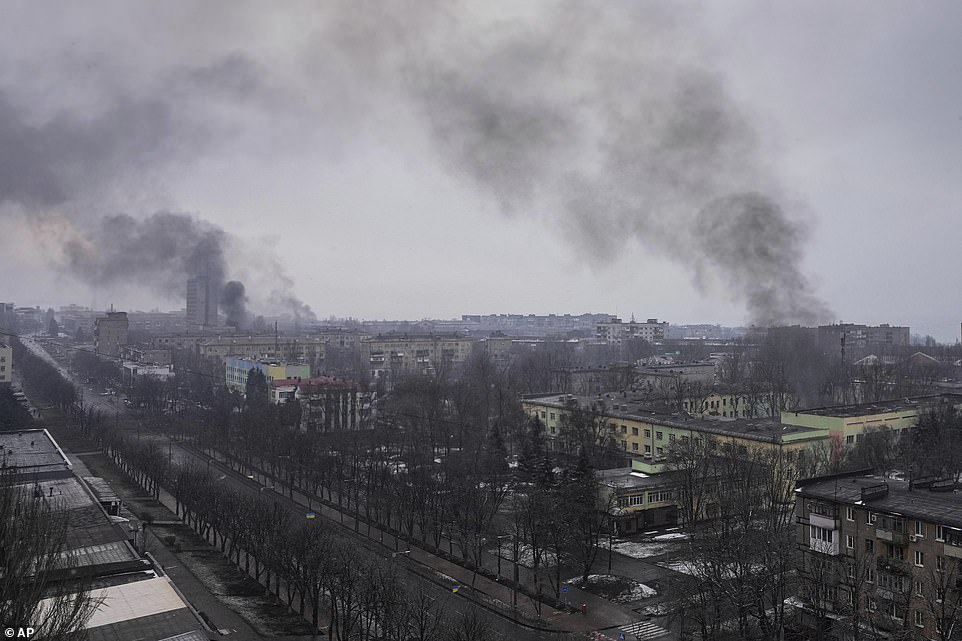 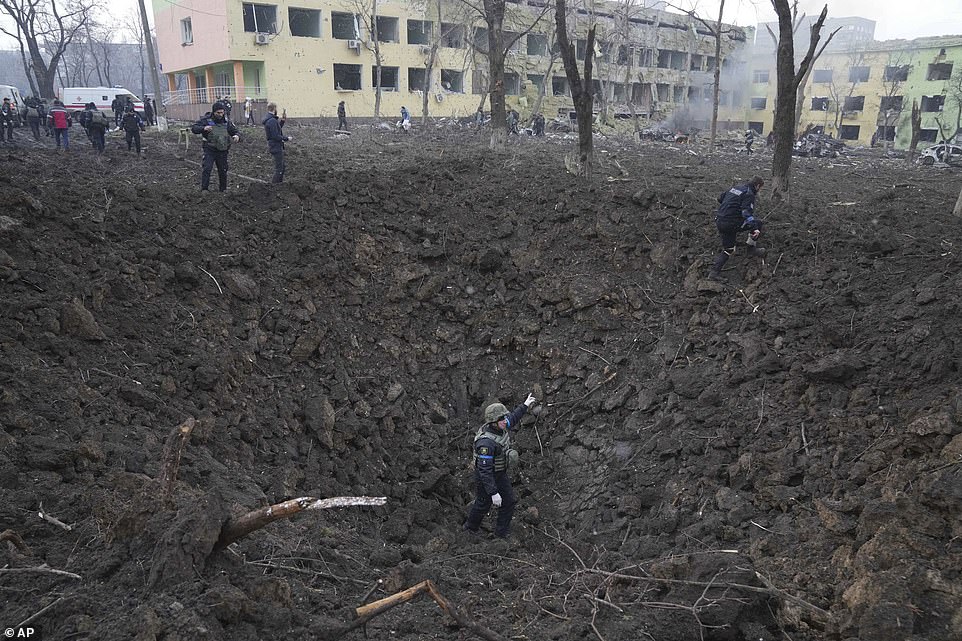 Ukrainian soldiers and emergency employees work at the side of the damaged maternity hospital in Mariupol, March 9, 2022 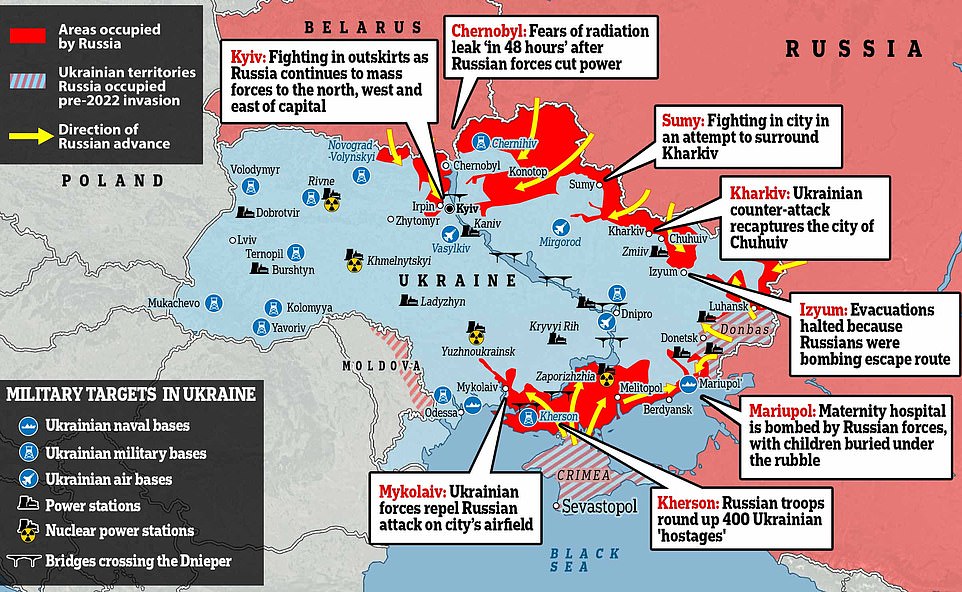 Ukraine has rejected most Russian evacuation routes because they lead to Russian soil or that of its ally, Belarus, while routes that Ukraine has proposed have come under bombardment. The only successful evacuation to take place so far has been from Sumy to Poltava (in green) 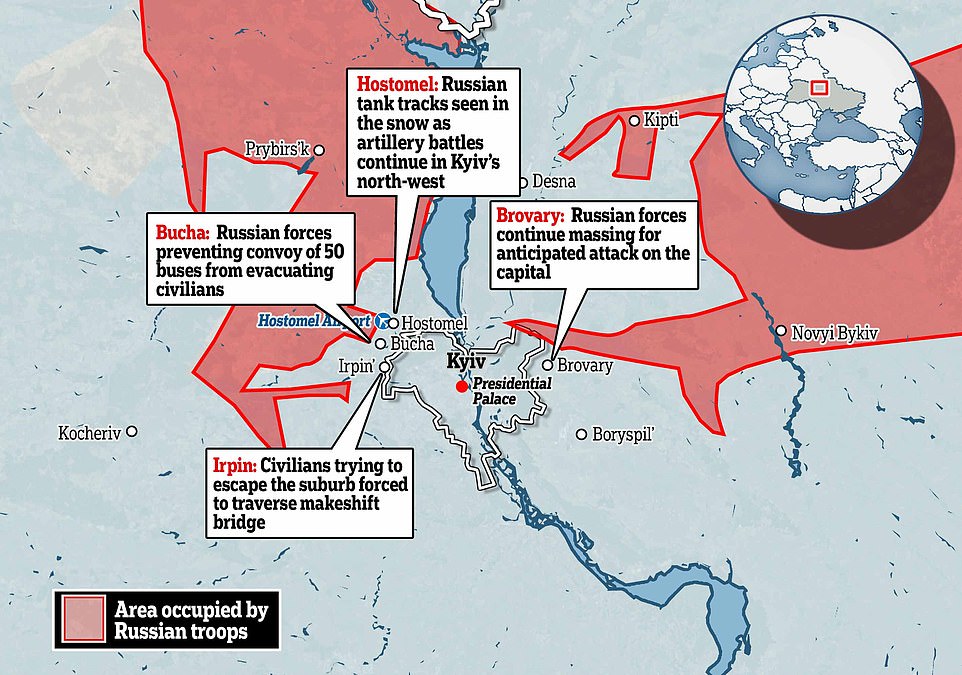 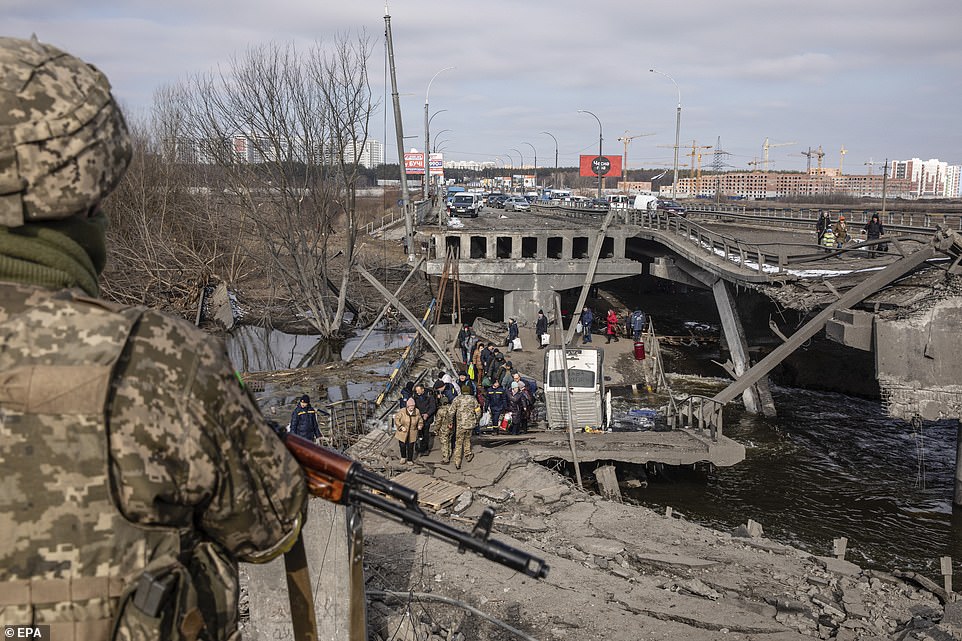 Ukrainian serviceman guards as residents cross the destroyed bridge as they flee from Irpin, March 9, 2022

In Irpin, a town of 60,000, police officers and soldiers helped elderly residents from their homes. One man was hoisted out of a damaged structure on a makeshift stretcher, while another was pushed toward Kyiv in a shopping cart. Fleeing residents said they had been without power and water for the past four days.

Regional administration head Oleksiy Kuleba said the crisis for civilians is deepening in and around Kyiv, with the situation particularly dire in the suburbs.

‘Russia is artificially creating a humanitarian crisis in the Kyiv region, frustrating the evacuation of people and continuing shelling and bombing small communities,’ he said.

The situation is even worse in Mariupol, where efforts to evacuate residents and deliver badly needed food, water and medicine failed Tuesday because of what the Ukrainians said were continued Russian attacks.

The city took advantage of a lull in the shelling Wednesday to hurriedly bury 70 people. Some were soldiers, but most were civilians.

The work was conducted efficiently and without ceremony. No mourners were present, no families to say their goodbyes.

One woman stood at the gates of the cemetery to ask whether her mother was among those being buried. She was.