Ukraine has started calling up its military reserves for training amid fears Russia is poised for an invasion.

President Petro Poroshenko is fearful that Putin could try to seize the ports of Mariupol and Berdyansk, located around the Sea of Azov.

The aim would be to create a land corridor between the eastern Ukranian regions of Donetsk and Luhansk, which are partly controlled by Russian-backed separatists, and Crimea, which has been annexed by Moscow.

But Kremlin spokesman Dmitry Peskov dismissed the rumours as ‘absurd’ and described them as ‘another attempt to generate tension’. 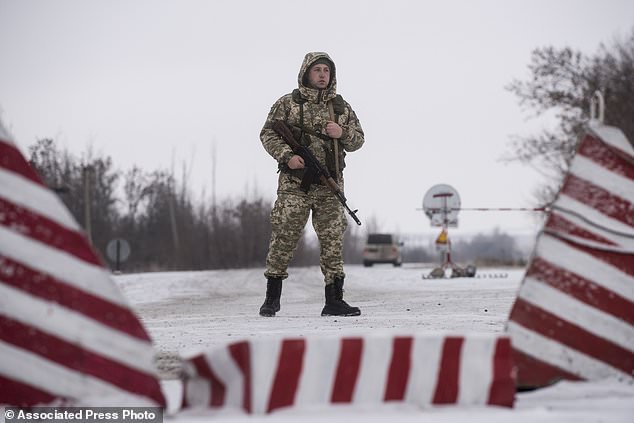 Ukraine has begun calling up its military reserves for training amid fears that Russia could be about to invade and seize ports around the Sea of Azov (pictured, a Ukrainian border guard) 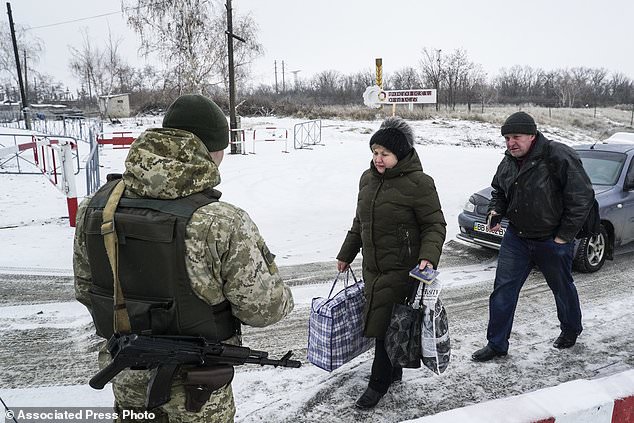 The recruits are being called up as part of martial law which has also seen Russian men aged between 16 and 60 barred from crossing the border (pictured, Ukrainians cross the border)

It comes after the Russian coast guard fired upon and seized three Ukrainian naval vessels and their crews off the Crimean Peninsula in the Kerch Strait.

Poroshenko has already responded by introducing martial law for 30 days in much of Ukraine, but is now considering further action.

For the duration of martial law, Ukrainian authorities barred entry to all Russian men aged 16 to 60 in a move the Ukrainian leader said was needed to prevent Russia from further destabilizing the country.

Poroshenko said Monday that some reservists will be summoned for training as part of martial law.

He also said that some military units will be redeployed to strengthen the nation’s defenses.

‘Ukraine is taking its own steps in response to the threat of a large-scale Russian invasion,’ the Ukrainian leader said.

Over the weekend, Poroshenko said that Russia has deployed a large number of troops and tanks along its border and intends to push inland. 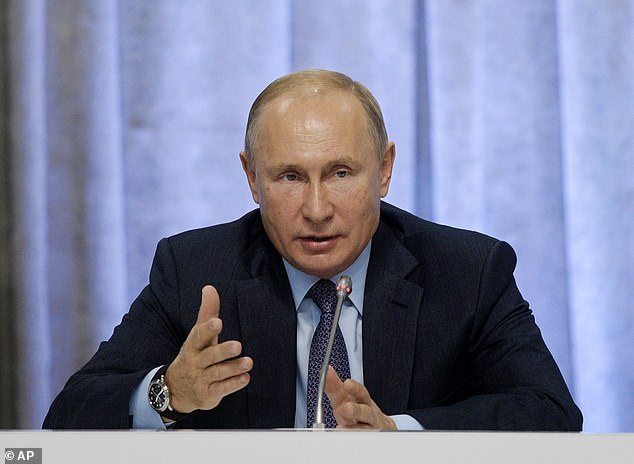 Dmitry Peskov, spokesman for Vladimir Putin, called fears of an invasion ‘absurd’ and said it was another attempt to stoke tensions with Russia 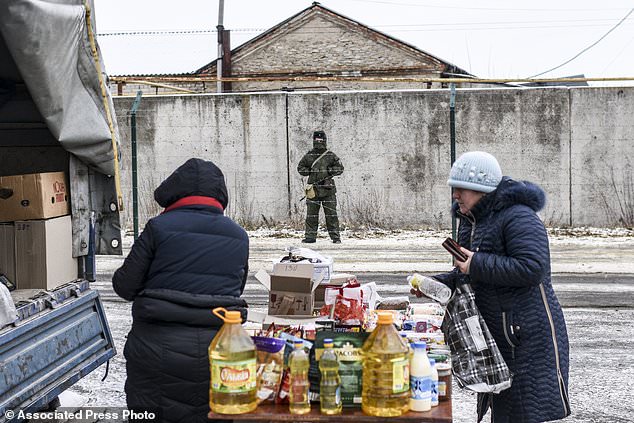 Ukraine also accused Russia of blockading its ports on the Sea of Azov.

Peskov rejected Kiev’s claim that Russia was blocking traffic to and from Ukrainian ports on the Sea of Azov, saying that navigation has continued normally except for occasional breaks because of bad weather.

The separatist conflict in eastern regions forming Ukraine’s industrial heartland has taken a toll on the national economy, reducing the cargo flow through the Ukrainian ports of Mariupol and Berdyansk on the Sea of Azov.

Vitaliy Sinhur, a dock worker in Berdyansk, said the movement of ships has significantly ebbed.

Over the weekend, Poroshenko urged Germany and other Western allies to boost their naval presence in the Black Sea to help deter Russia from further aggression. 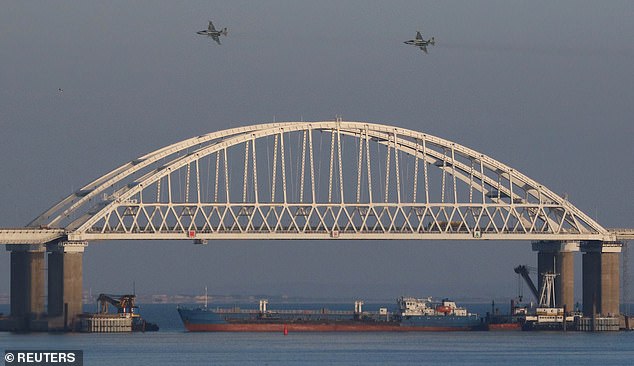 Tensions have flared since Russia rammed, shot at and seized three Ukrainian ships near the Kerch Strait (pictured), which it temporarily closed 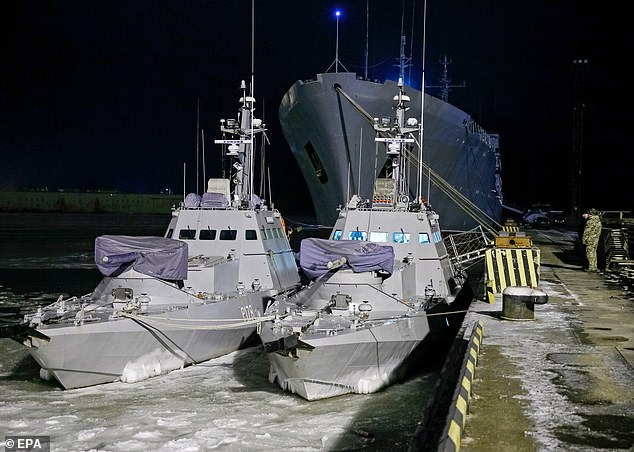 Two Ukrainian ships seized by Russia are seen in the port of Mariupol. Russia also seized 24 Ukrainian sailors in the confrontation

Amid the tensions, the Russian military said its forces in Crimea were conducting drills involving Bal and Bastion long-range anti-ship missile systems.

In the Nov. 25 incident, three Ukrainian naval vessels were heading from the Black Sea into the Sea of Azov when they were blocked by the Russian coast guard near the Kerch Strait between Russia’s mainland and Crimea.

After many tense hours of maneuvering, the Russians opened fire and seized the Ukrainian vessels and 24 crew members.

The Ukrainian seamen have been put in custody for two months pending Russia’s investigation into the clash.

Ukraine and Russia have traded blame for the naval incident that further escalated the tug-of-war that began in 2014 when Russian annexed Crimea and backed separatist rebels in eastern Ukraine.

Ukraine says that its ships were operating in line with a 2003 treaty with Russia envisaging free navigation for vessels of both countries in the Sea of Azov and the Kerch Strait.

Russia is adamant that the Ukrainian ships had entered its waters without permission.

Later this week, the Ukrainian parliament is expected to mull a presidential decree blocking the extension of a friendship treaty, a long-anticipated symbolic move.

Poroshenko has said he tried to arrange a phone call with Putin to discuss the standoff but faced the Kremlin’s refusal.

Peskov said Monday that ‘no such conversation is planned.’