Don’t trouble yourself with Easter getaway queues! Britain will bask in sizzling 22C on Good Friday before warm weekend after 18C today in welcome news for staycations

Britain is set to bask in glorious 22C on Good Friday before a warm Easter Bank Holiday weekend after today’s barmy 18C, in a welcome boon for staycationers.

The Met Office has declared the weather looks like it will be ‘playing ball’ over the next five days, with London and the South East of England expected to get the best of the sunshine tomorrow and Saturday after sunshine and clear skies in the capital today.

Forecasters say temperatures could rocket to 22C on what would be the hottest day of the year so far – beating the 20.8C recorded on March 23.

Mercury levels will drop slightly on Saturday and the weather could turn overcast on Easter Sunday before the sun breaks out again on Monday.

It comes as officials warn British holidaymakers to plan ahead and avoid the busiest times amid concerns of Easter getaway chaos, with 27.6million car journeys expected to take place over the Bank Holiday weekend, according to the AA.

Senior Meteorologist Craig Snell said: ‘As Bank Holidays go it is looking fairly fine and dry across the UK, so I think people will certainly be able to get out and enjoy the countryside or whatever it is they’re doing over the Easter weekend. The weather will be playing ball. All in all, it looks like travel conditions are going to be fairly ok, weather-wise.’ 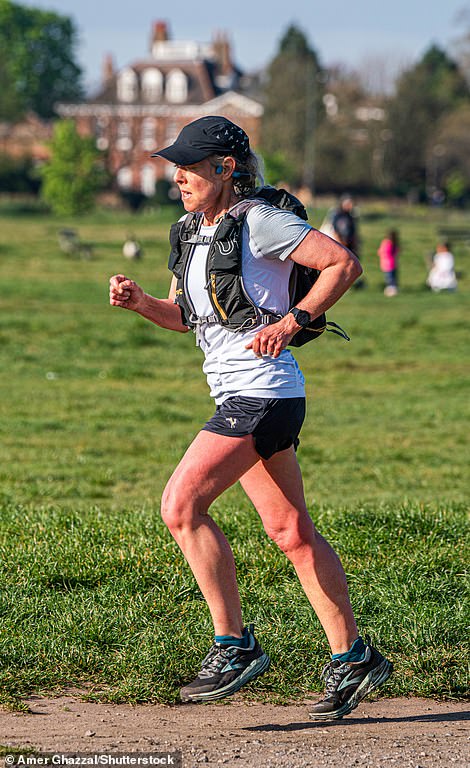 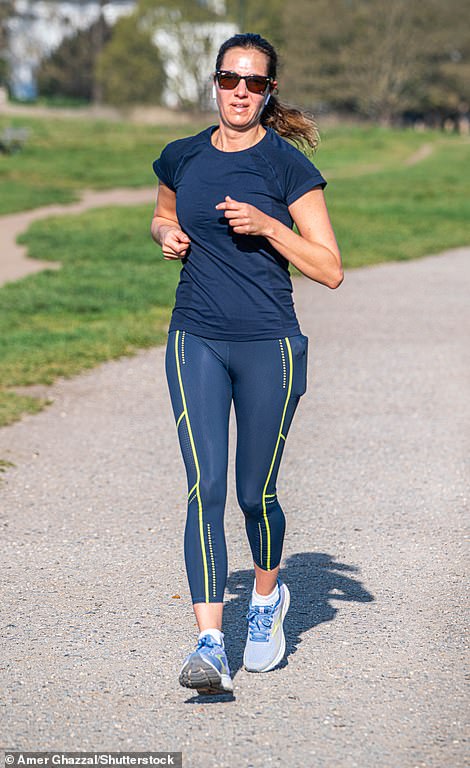 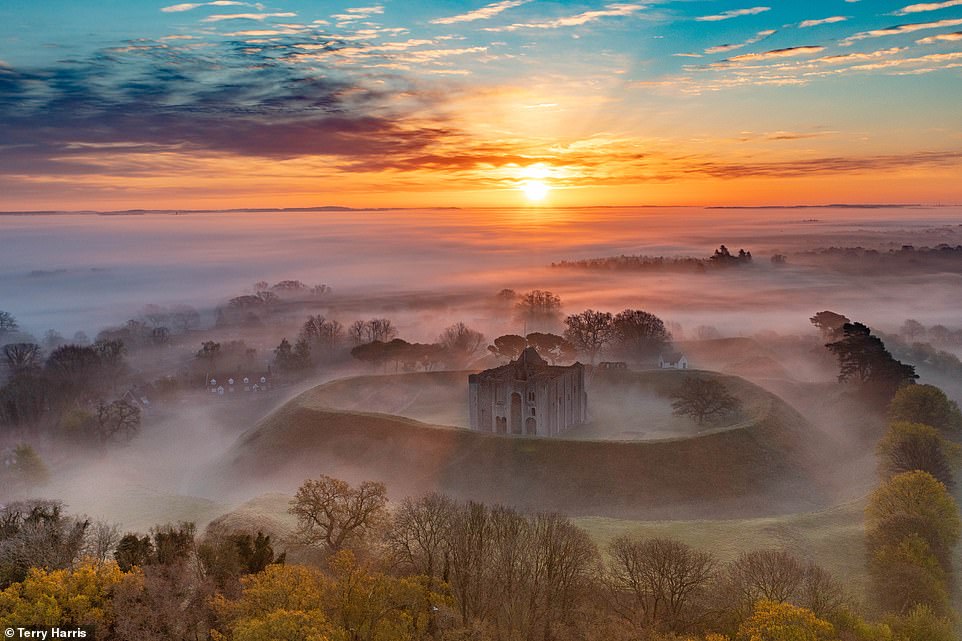 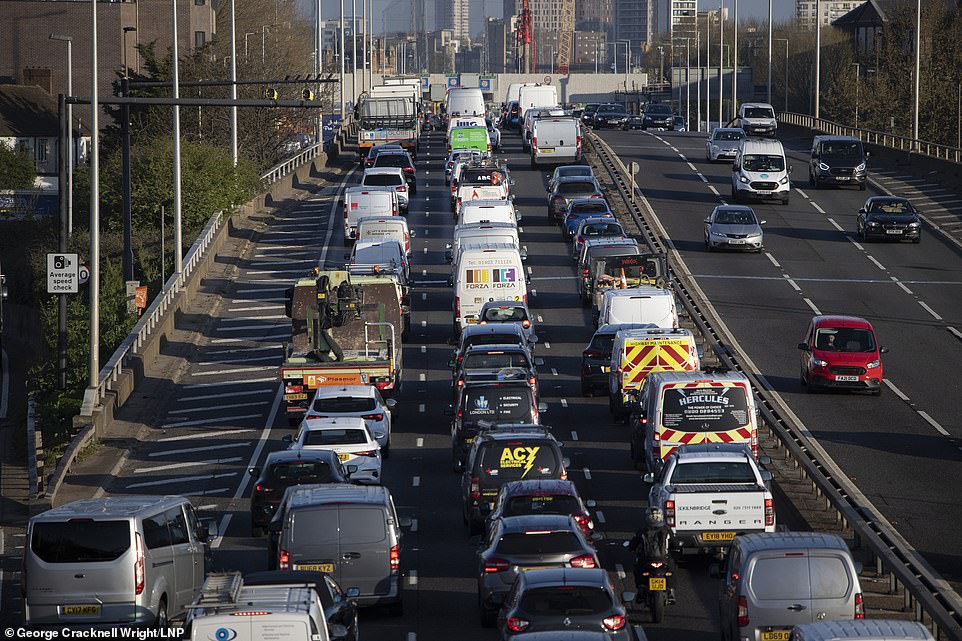 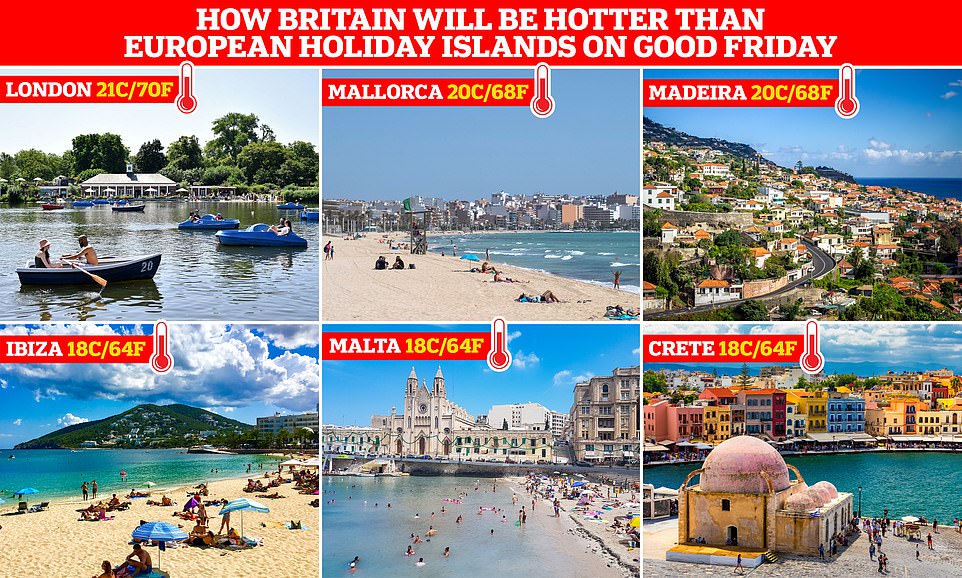 Easter weekend holiday makers hoping to miss the rush are today facing queueing chaos at Manchester and Birmingham airports, while BA phone lines are said to be clogged by eight-weeks worth of furious customers checking if their flights have been cancelled.

Passengers say they were met with ‘utterly shambolic’ scenes after arriving this morning at Terminal 2 of Manchester Airport, where customers say they had a 90 minute wait for their luggage.

Others said how queues for security stretched outside Terminal 1 and into the car park – mirroring scenes seen earlier this week. 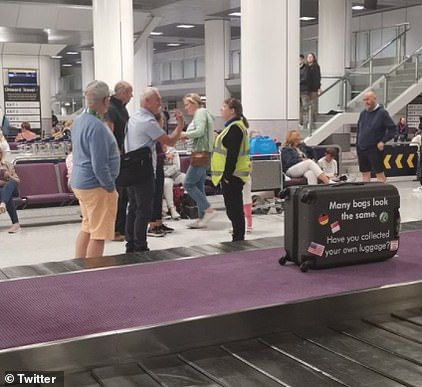 Passengers say they were met with ‘utterly shambolic’ scenes after arriving this morning at Terminal 2 of Manchester Airport, where customers say they had a 90 minute wait for their luggage 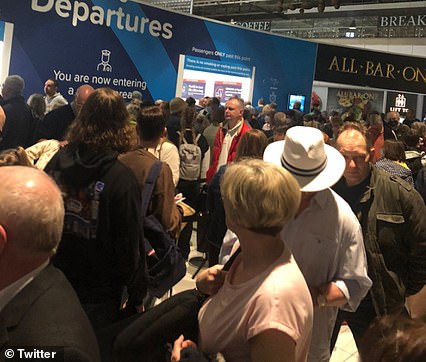 At Birmingham Airport, passengers complained of waiting in hour long ‘fast track’ queues for security, despite customers paying at least £4-per-person for the priority service.

Meanwhile, BA passengers are said to be facing clogged customer support lines. Frustrated passengers are reportedly struggling to get through to support services, after asking customers flying in the next eight weeks to check in with the airline about their upcoming flights.

The latest disruption comes following weeks of queueing chaos at airports up and down the UK. Airport and airline bosses have blamed an Easter rush, long-term staffing issues and a wave of Covid enforced sickness for the delays.

It also comes ahead of a four-day Easter weekend – typically one of the busiest for travel each year and the first without any UK Covid travel restrictions in more than two years.

Chief Meteorologist Neil Armstrong said: ‘Most people will see some spells of decent bank holiday weather this weekend, and it will feel warm in places, particularly for the first half of the Easter break.

‘However, a low-pressure system will affect the northwest of the UK later Sunday, bringing unsettled weather to the north with some strong winds and rain in the northwest, which could impact driving conditions for some, but further south it will be drier, especially in the southeast.

‘There will be varying amounts of cloud, but temperatures are widely likely to be above average for the time of year, although low cloud might keep temperatures lower in coastal areas.

‘However, where the sun comes out people can expect some very pleasant spring conditions.’

Jim Dale, meteorologist for British Weather Services, said: ‘Humidity will rise on Wednesday and with an improving picture in the weather, the cloud start to break and it will be time for t-shirts.

‘It turns more settled through the latter part of the week and in the run-up to Easter, as high pressure builds.

‘We then get a bit of the desert as the warm air comes in from Africa at the end of the week.’

Meteorologist Annie Shuttleworth added: ‘If people are travelling for sunshine, then further eastern areas are more likely to see that brighter weather.

‘I think in the main for the bank holiday weekend, we’ll see temperatures quite widely above average across the UK and hopefully they could be very warm in the south-east in particular.

‘Warmer than average certainly, but nowhere near heatwave criteria. It will definitely be warmer than the week we’ve just had and last week.’

Meanwhile, Ladbrokes says this weekend looks set to play host to the hottest day of the year. The bookies now make it just a 1/3 shot for record temperatures for the year to be recorded anywhere in the UK on Saturday or Sunday. Elsewhere, odds have been slashed from 3/1 to just 5/2 on this being the hottest April ever.

Alex Apati of Ladbrokes said: ‘Things are hotting up on the weather front, and we could well be set for a record-breaking weekend as a result.’

And Coral has slashed the odds to 1-2 (from 6-4) on this weekend being a record hot Easter. They make it a 67% chance of this Easter being the hottest since records began.

‘We are in for a glorious Easter weekend. Our betting suggests there is a 67% chance it could be a record hot Easter, so it might be a good idea to keep those Easter eggs in the shade,’ said Coral’s John Hill. ‘The prospect for the rest of the month also looks promising, so we have also the cut the odds on a record hot April.’

According to the Met Office, on Friday it will be cloudy in the north and west with outbreaks of rain and drizzle, tending to ease later. Brighter elsewhere, the weekend’s temperatures are likely to peak here at around 22C in the southeast.

On Saturday, Britons will see mixture of clear and sunny spells with cloudier areas and some showers. Those showers will be most likely in central and western areas early in the day but could develop elsewhere at times.

A few mist and fog patches inland at first and more extensive areas of low cloud and fog around some coasts will suppress temperatures a bit in those places, particularly in the east. Elsewhere it will feel warm, especially in any sunshine, but perhaps slightly cooler than Friday.

Sunday will be similar, although overall probably drier than Saturday, with showers confined mainly to the north and west. However, more persistent rain arriving in the evening from the west will signal a change to unsettled, cooler weather from Monday.

Travellers have been advised to plan ahead and avoid the busiest times if possible amid concerns of Easter getaway chaos.

The Department for Transport said it is working with operators to minimise disruption, but advising people to allow extra time for their journeys.

Holidaymakers have already faced flight cancellations this week and queues for cross-Channel ferry services look set to continue as a number of P&O vessels remain detained due to safety issues.

The Maritime and Coastguard Agency (MCA) said there were ‘additional deficiencies’ found during a reinspection on Wednesday of the Pride of Kent, while the Spirit of Britain vessel was detained on Tuesday after an inspection found ‘a number of deficiencies’.

The suspension of Dover-Calais sailings by P&O Ferries means there is a shortage of capacity on the key route just as Easter weekend approaches.

Large queues of lorries have been forming on the roads approaching the Port of Dover.

Meanwhile, some 27.6 million car journeys are expected to take place over the Bank Holiday weekend, according to the AA.

Motorists are advised to travel on Thursday or early on Saturday if they can, to give themselves the best chance of avoiding long queues.

Edmund King, AA president, said: ‘All our polling suggests that Good Friday will be the busiest getaway day for Easter trips and staycations. If some drivers can leave on Thursday or early Saturday, they may miss some of the jams.’ 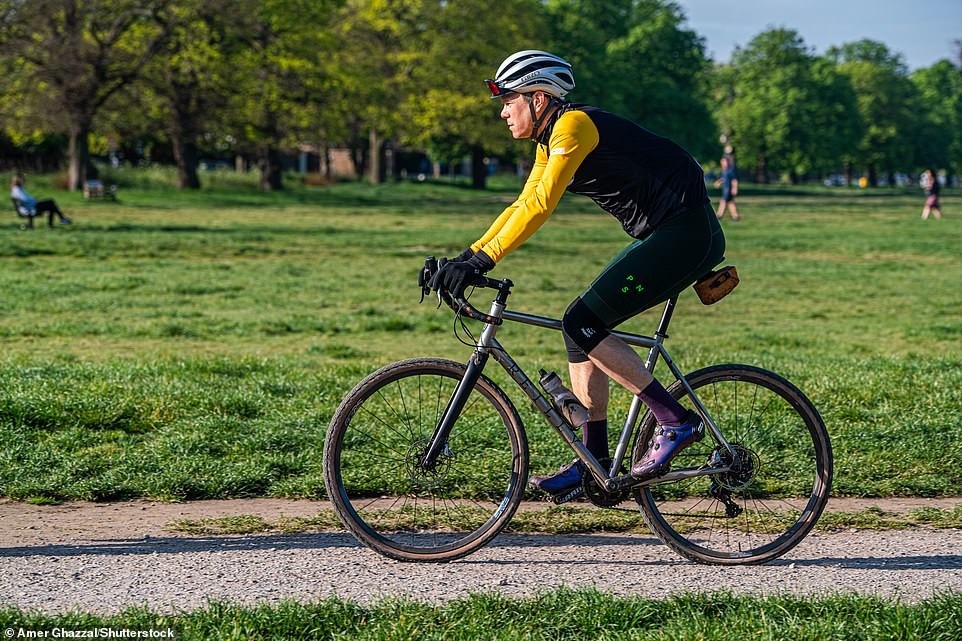 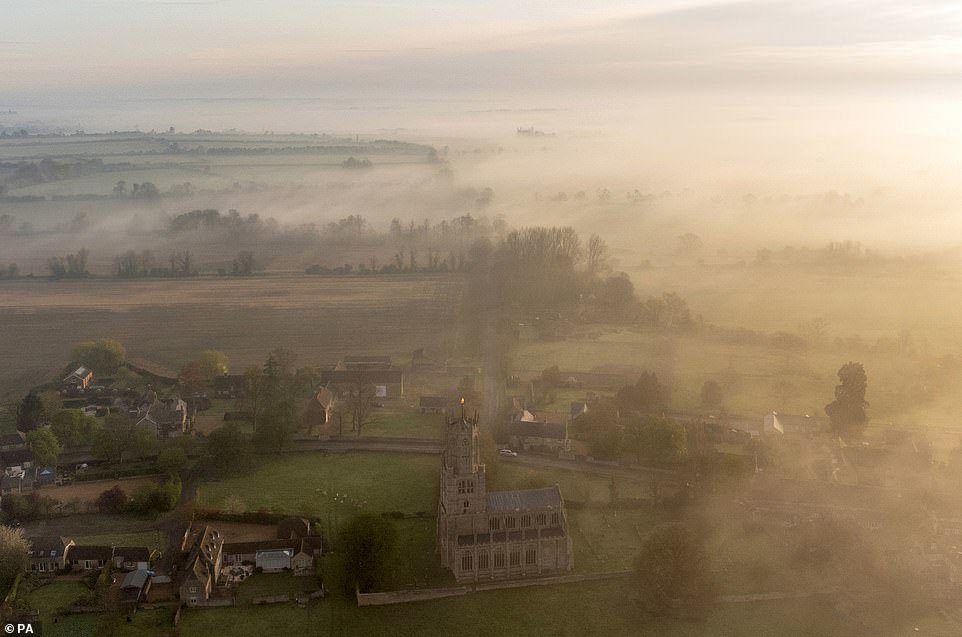 Mist hangs over St Mary and All Saints Church in Fotheringhay, Northamptonshire at sunrise, Thursday April 14, 2022 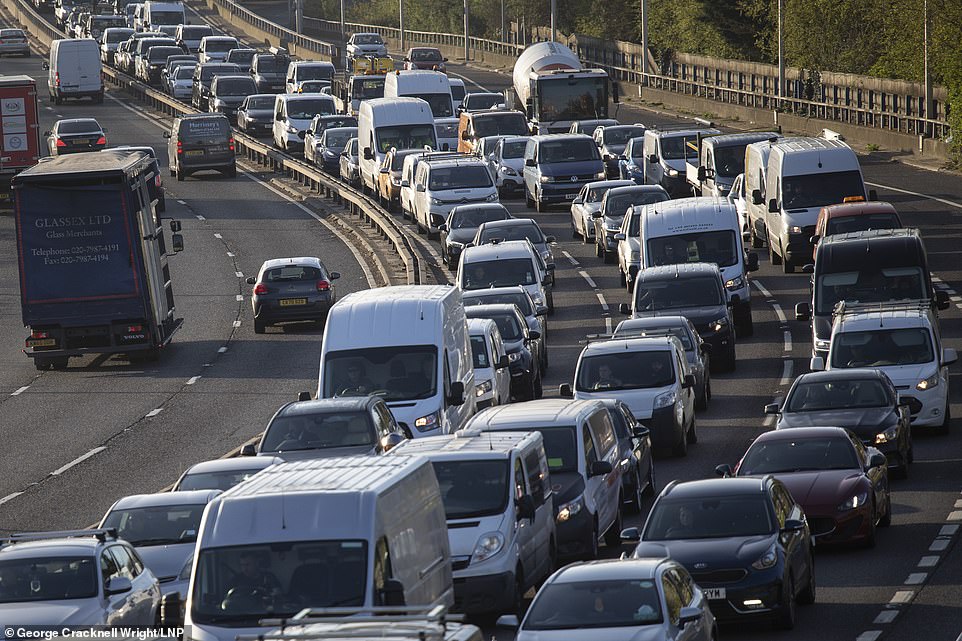 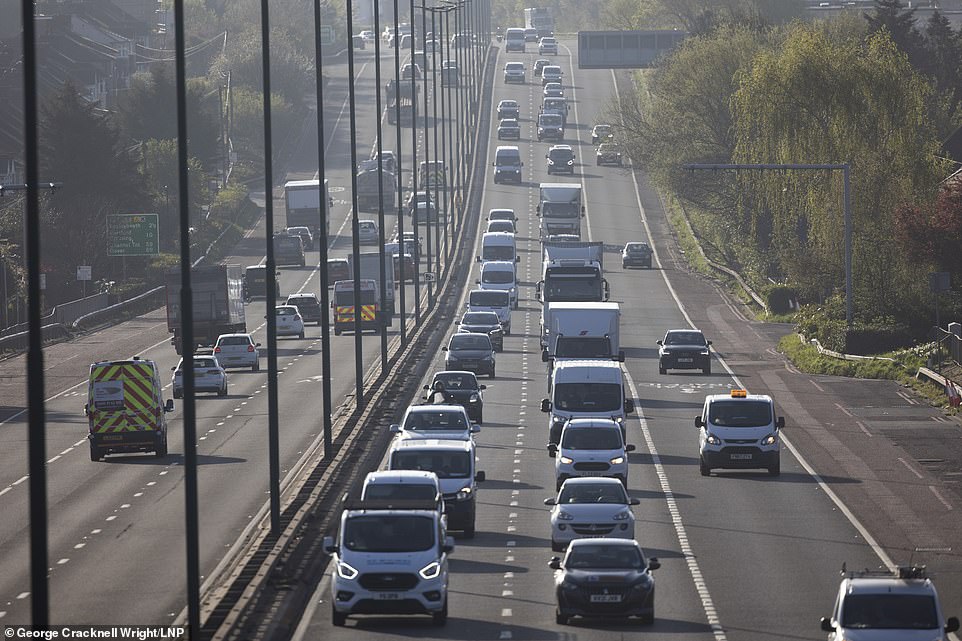 Officials have warned British holidaymakers to plan ahead and avoid the busiest times amid concerns of Easter getaway chaos, with 27.6million car journeys expected to take place over the Bank Holiday weekend, according to the AA 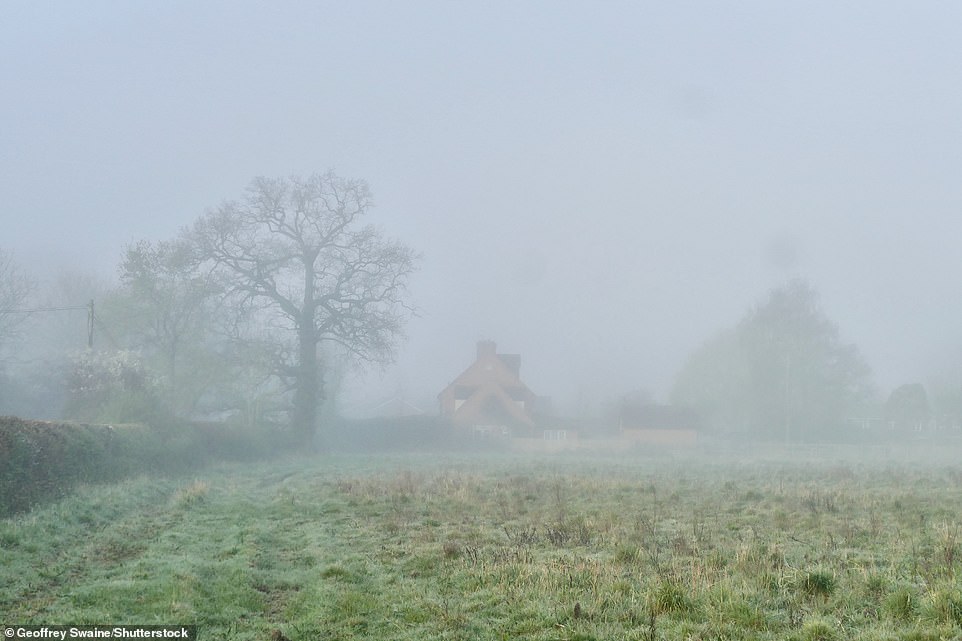 Mist hangs low over the countryside in Dunsden, Oxfordshire at first light, April 14, 2022

The motoring organisation also estimated that, with higher fuel prices, a 500-mile round trip will see drivers paying £20 more at the pumps than they did last Easter.

Damon Jowett, Director of Roadside and Network Services at breakdown provider Green Flag, said: ‘People across the country will be looking forward to the first bank holiday weekend of 2022 and, with the weather looking reasonable, it’s no surprise that so many of us plan to hit the road.

‘We want to make sure everyone can enjoy the long Easter weekend without any added stress or complications, so we’re urging drivers to make sure their vehicles are road trip ready. We know that many breakdowns are avoidable if the proper care is taken before and during a trip, so it’s important to thoroughly check vehicles before setting off and be prepared in case a breakdown does happen.’

Transport minister Robert Courts said his department is ‘working closely with operators to minimise disruption’ during the break, but advised people to ‘plan ahead and check for updates from operators’.

Flight cancellations and long queues at UK airports in recent days have been blamed on difficulties recruiting new staff and the time it takes for their security checks to be processed, as well as increased levels of coronavirus-related sickness.

Aviation data firm Cirium said 9,212 flights with 1.6million seats are scheduled to depart from UK airports between Good Friday and Easter Monday. The number of flights is 78% of the total for Easter 2019, before the coronavirus crisis affected travel. The busiest day will be Good Friday when some 2,430 flights are due to depart.

Rail passengers have also been warned of delays as Network Rail carries out 530 engineering projects costing a total of £83million.

This includes the closure of the West Coast Main Line between London Euston and Milton Keynes for four days from Good Friday due to upgrades of the existing line and HS2 work.