Want climate news in your inbox? Sign up here for Climate Fwd:, our email newsletter.

They have the largest carbon footprints. Also the largest economies. Now, as diplomats meet in Poland for high-stakes climate negotiations, a pitched standoff between the United States and China threatens to slow global action on climate change precisely at a time when the risks of catastrophe are accelerating.

The tensions between Washington and Beijing range from trade to cybersecurity to military rivalry in the Pacific. And while some of those issues have simmered for years, cooperation in the fight against climate change had once been a bright spot, so much so that it propelled the creation of the landmark global agreement in Paris in 2015 to curb greenhouse gas emissions.

When the Trump administration announced its intention to pull out of the Paris pact altogether, rejecting the scientific consensus that greenhouse gas emissions are warming the planet, it represented perhaps the most consequential diplomatic reversal of the Trump era.

“The biggest threats to the planet are the lack of U.S. climate leadership at home and the unwillingness of the U.S. to engage with China,” said Joanna Lewis, a China specialist at Georgetown University. “The rest of the world looks to the U.S. and China for leadership, and it has become clear that, as the alliance has waned, global momentum to address climate change has slowed.”

Taken together, the emissions produced by the United States and China account for more than 40 percent of the global total. In both countries, emissions went up this year, according to an analysis issued this week by the Global Carbon Project in which one scientist likened the acceleration of global emissions to “a speeding freight train.”

That fact hovers over Katowice, the Polish city where the United Nations is leading two weeks of talks to figure out how to implement the Paris Agreement. Adding to the urgency of that meeting, the promises made so far under the Paris pact are nowhere enough to avert the worst effects of climate change. A United Nations scientific report issued this fall warned that, if emissions continued to rise at the current rate, the planet would warm so fast that it could lead to widespread food shortages, wildfires, and floods. 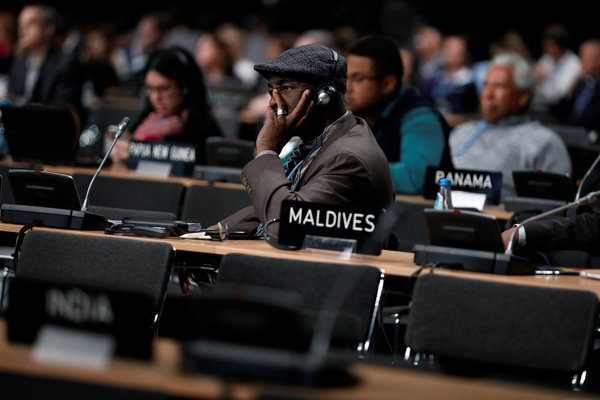 It’s hard to imagine a worse time for the world’s two behemoths — the United States, traditionally representing the rich world in climate negotiations, and China, representing the developing countries — to be locked in a cycle of intense distrust at the highest levels.

“The U.S.-China climate honeymoon is definitely over. That much is very clear,” said Li Shuo, a senior policy adviser for Greenpeace Asia, based in Beijing. “The U.S. is asking a lot but there’s nothing that the U.S. can give. That’s the fundamental challenge.”

For China’s part — even though its emissions have grown in the last two years, mainly because of continued coal use — the country is on track to meet its modest, self-imposed Paris target, which is to reach peak emissions by 2030. In fact, it appears on track to do so ahead of schedule, according to independent analysts. It is also ramping up renewable energy sources faster than any country in the world. The emissions intensity of its economy, geared to manufacture goods for the rest of the world, is declining.

At the same time though, coal plants have not closed down as fast as some had expected. Much more worrying, China is exporting coal technology abroad, with its powerful state-owned companies proposing to build coal-fired power plants from Kenya to Pakistan, effectively exporting its carbon footprint. 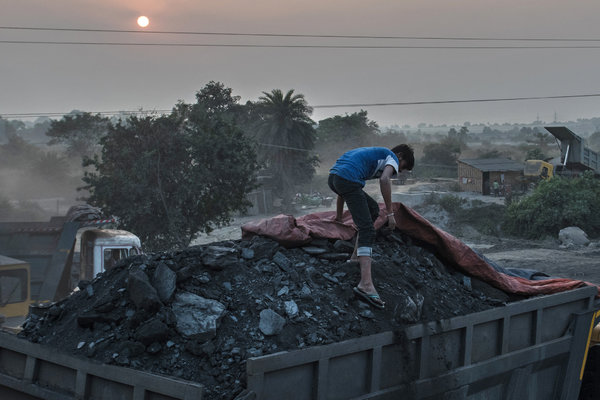 Now, with additional economic headwinds from Washington, China confronts a new debate: Should it continue to move rapidly from its emissions-intensive industrial economy, or should it simply slow down?

Former Vice President Al Gore, who has been closely watching climate diplomacy, said in an interview last week that although the trade war with the United States could slow the country’s transition away from a heavily fossil fuel based economy, he did not think that China would change course. Its leaders are under political pressure to clean up the air. It is ramping up wind and solar energy sources. It is on track to be the world’s largest electric vehicle market. Its carbon market is to come into effect next year, though only in a handful of sectors.

“They plan their work and work their plan,” Mr. Gore said. “I expect them to continue on the journey they mapped out regardless of what the U.S. does.”

So far, there is no evidence that China is reversing course. Still, the United States posture, and the concerns over a continued slowdown of the Chinese economy give ballast to Chinese promoters of heavy industry, some China analysts say, putting President Xi Jinping under considerable pressure.

“People are widely concerned that this trade dispute will lead to some unemployment,” said Zou Ji, the Beijing-based head of the Energy Foundation of China, a group that calls on China to transition away from fossil fuels to clean energy sources. “I feel the pace of emissions abatement could become slower.”

Three key issues pit the United States and China against each other in the climate negotiations, where American negotiators are participating pending the country’s formal exit at the end of 2020.

First, the United States wants robust rules across the board for all countries to account for their own emissions and be subject to outside scrutiny. China insists on different reporting rules for developing countries. China has India on its side on this demand, though not other vulnerable poor countries, who are wary of looser rules for China.

“We are basically designing, in Katowice, a whole set of rules that will bind China but that will not cover the United States,” said Mr. Li of Greenpeace Asia. “It creates a fundamental sense of unfairness in the Chinese mind.”

The rule book, as it’s called, is the centerpiece of the Katowice negotiations, which began Monday and run through Dec. 14.

Second, the United States, under the Trump administration, has pulled back from helping poor countries adapt to the ravages of climate change. China, which considers itself the leader of the world’s developing countries, is goading the rich world to pony up — and be held accountable for it.

And third, perhaps most importantly, the test for China is whether, in the face of an American retreat, it will ramp up its ambition to cut emissions in the coming years.

The consequences for the world’s 7.6 billion people are enormous.

“It takes the pressure off of greater ambition and faster action,” said Alex Wang, a University of California Los Angeles law professor who follows China’s environmental policy, of the United States-China tensions. “If you’re coming from the perspective that we’re already way behind, then the current dynamic is bad.”

Somini Sengupta covers international climate issues and is the author of “The End of Karma: Hope and Fury Among India’s Young.” @SominiSengupta • Facebook