Claws are out! Two leopards fall from tree in mid-air fight in Kruger National Park in South Africa

This is the amazing moment two leopards were captured falling from a tree during a mid-air tussle.

The animals fell from the tree in the Kruger National Park in South Africa and were filmed by wildlife photographer, Lisl Moolman.

Footage shows a mother leopard, Moya, standing at the base of the tree and her cub, Amira, sitting at the top. 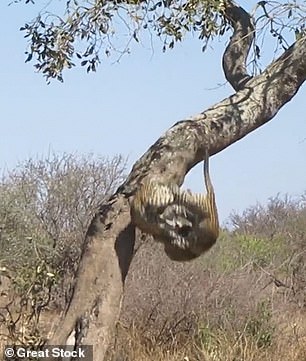 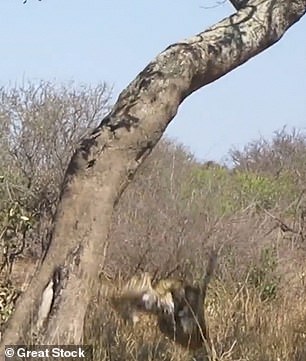 Moya looks up to see her daughter in the branches above and runs up the tree to attack her.

In the video, uploaded on December 3, the pair growl at one another and begin to fight, causing the two large cats to fall to the ground.

Despite falling from the tree, the pair don’t break their fighting, and both mother and daughter continue to roll around on the ground once they land.

Moya and Amira had both mated with a new male in the area and after a short skirmish in the dirt the daughter walks away triumphantly.

She makes her way over the the tree the pair have just fallen from and marks her scent.

The photographer said: ‘Different dynamics began to play a role in their normally amicable relationship’.