Dozens of protesters rallied in Tunis on Friday to demand the government cancel recent austerity measures. 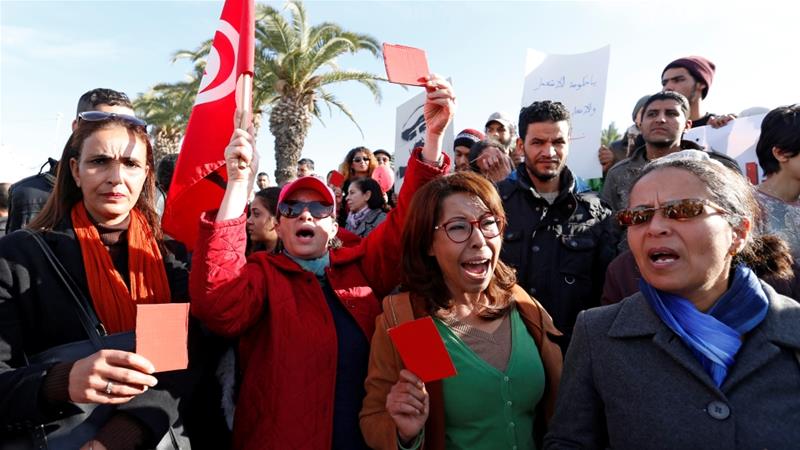 Anti-austerity protests are continuing in Tunisia, as dozens of mainly young people rallied in front of the country’s parliament to reiterate their demand to cancel a contentious budget law.

Activists with the Fech Nestannew (What are we waiting for?) protest movement chanted “work, freedom and national dignity”, among other slogans, in front of the Tunisian parliament building in the capital, Tunis, on Friday afternoon.

The protesters were held back by state security forces, several of whom were dressed in riot gear, videos shared on the Fech Nestannew Facebook page showed.

Widespread public protests broke out across Tunisia earlier this month after the government unveiled a 2018 budget that increased the price of basic goods, including food and petrol.

The legislation also includes an increase to the value-added tax and cuts to public sector jobs.

Earlier this week, Fech Nestannew organisers said more than 1,000 people had been arrested since the protests began.

Tunisian officials have accused protesters of looting at the anti-austerity rallies, many of which have taken place at night.

But Ayoub Jaouadi, a Fech Nestannew spokesperson, said some of the arrests took place before any acts of vandalism were committed, Tunisian radio station Jawhara FM said.

The group announced the creation of a committee to support activists, local media also reported.

Fech Nestannew organisers have also called on the Tunisian authorities to investigate the death of a protester in Tebourba, a town about 30km from Tunis, during a demonstration there on January 8.

Youssef Cherif, a Tunisian political analyst, told Al Jazeera the state’s response to the protests has been “quite brutal” in terms of the arrests and harassment of demonstrators, when compared with similar protests in the past.

The Tunisian government has sought to discredit protesters, rather than address the concerns they are raising about the economy, Cherif said.

“I think we’ll see a continuation of these protests,” he said, because the economic crisis they are tied to “doesn’t seem [like it will] get solved any time soon”.

In response to the protests, the Tunisian government has promised to spend $70.3m to support poor families and provide better healthcare access across the country.

But Tunisia’s unemployment rate sits at around 15 percent, and it is nearly double that among young people.

Many Tunisians are frustrated that the country’s economy has not improved more than seven years after a popular revolution toppled longtime President Zine El Abidine Ben Ali.

“The protests will continue,” Cherif said.

“And there is always the fear that the more protests continue, the more the state apparatus leans towards more authoritarian actions in dealing with them.”