Federal Education Minister Alan Tudge has warned the government is in no hurry to bring back international students as Victoria has proposed while the coronavirus rages overseas. 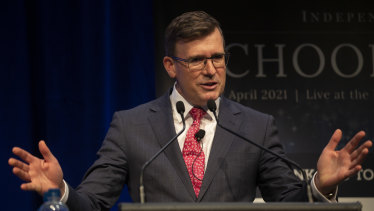 On Monday night, Victoria wrote to the federal government asking to start a second stream of 120 overseas students, migrant workers and actors each week on top of its quota of 1000 returning Australians.

Mr Tudge confirmed Victoria was the first Australian state to submit a plan but quickly tempered expectations on Tuesday, repeatedly saying the federal government would be “very cautious” in considering the proposal.

“We just received the letter last night, and obviously we’ll carefully look at it, get the advice,” the Education Minister said.

“But I want to say that with COVID ravaging throughout the world at the moment, we need to be very cautious about approving any new quarantine plans for anyone other than returning Australians.”

Since last year the federal government has placed the onus on states to come up with a proposal to fly international students and foreign workers into the country.

Canberra’s two conditions are that the plan must have been approved by the states’ chief health officers and must be in addition to the existing number of Australians returning every week.

Mr Tudge insisted Canberra’s “No.1 priority is the health of Australians and their economic security, and we don’t want to put that in jeopardy”.

Education is Victoria’s No.1 export, and schools and universities have both pushed for a timeline on the return of international students, who have been unable to study in Australia during the pandemic.

Mr Tudge also threw his support behind Australia’s controversial NAPLAN numeracy and literacy test, which will return this term after a pause in 2020 due to COVID-19.

He told the summit he “won’t accept the abolition of NAPLAN – let me be very clear about that”.

“If anything, there should more assessment, not less, so there is less emphasis on one test every couple of years,” he said.

“Now I’m not announcing anything in saying that, but good teachers will be constantly assessing the kids in their classroom.”

Mr Tudge said NAPLAN was critically important to assess how school systems, states and territories, and individual students are progressing.

He also called for higher pay for high-performing teachers.

The most experienced Victorian teachers are paid about $100,000, although some non-government schools pay tens of thousands of dollars more to recruit and retain staff members.

“I would certainly like to see some greater flexibility with teacher salaries so the most brilliant teachers can be rewarded for that they’re achieving,” he said.

“Now that’s not something which is in the control of the federal government; the states and territories employ the teachers or the Catholic schools or independent schools do.

“But I think that would be a good measure to be put in place and probably would help to make it attractive or some people to go into teaching.”

The Grattan Institute has also called for an increase in teacher pay by up to 80 per cent to $180,000 for those at the pinnacle of the profession. Teachers are paid well early in their careers, but in their 30s and 40s their pay stagnates relative to other professions, the think tank notes.

Mr Tudge also told The Age Schools Summit that he rejected the link between increased school funding and better student performance, arguing the UK has lifted results in reading, maths and science in the past 10 years even while cutting education spending.