Mississippi’s top health official concluded on Wednesday that the state with the nation’s second-lowest vaccination rate is now suffering through “the worst part of the pandemic,” in a week in which more than 20,000 students have been quarantined for exposure to coronavirus.

Mississippi State Health Officer Thomas Dobbs acknowledged the severity of the state’s health crisis, which has seen a surge in cases among the unvaccinated population overwhelm hospitals, leaving only a handful of intensive care unit beds still available for dozens of patients who need them. 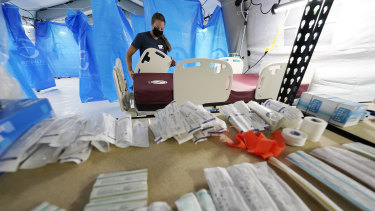 Medical supplies are lined up at a field hospital et up in one of the University of Mississippi Medical Centre’s car park. Credit:AP

“We are clearly at the worst part of the pandemic that we’ve seen throughout, and it’s continued to worsen,” Dobbs said at a news briefing.

“We’re seeing higher and higher numbers of not just cases but hospitalisations, people in intensive care units, life support. And sadly, as we’ve seen, additional deaths are going to follow. Without a doubt we have surpassed our previous peaks by a substantial margin, and we expect to see that continue.”

Mississippi recorded more than 4000 new cases on Wednesday, bringing its seven-day average for new infections to 3526, according to data compiled by The Washington Post.

The infection numbers this week in Mississippi, including Monday’s record-breaking 7839 cases in a single day, are higher than at any point of the pandemic. Nearly 1700 people are hospitalised for COVID-19 and 467 ICU beds are occupied in the state.

At the University of Mississippi Medical Centre, a second field hospital was installed in a parking lot to help treat COVID-19 patients in Jackson. The first field hospital was opened last week with federal government backing, but the second one, with 32 additional beds, is funded and staffed by Samaritan’s Purse, a North Carolina-based Christian relief charity. 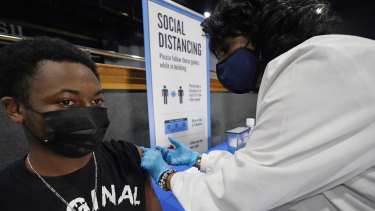 Eric Wilson gets his Moderna shot in Jackson, Mississippi.Credit:AP

About 36 per cent of Mississippi is fully vaccinated, the second-worst vaccination rate in the country, above only Alabama.

While Dobbs said he was encouraged by the recent increase of residents getting their first shots, he noted that 89 per cent of hospitalisations and 86 per cent of deaths in the state were among unvaccinated people.

The state’s top doctor, who has likened this latest surge in Mississippi to a “tsunami,” has repeatedly stressed that vaccination remains “our best way out of this pandemic”.

“It’s effective and extremely safe,” Dobbs said of the vaccines. “COVID has killed almost 8000 Mississippians, but we’ve seen very few side effects from the vaccine.”

The state’s worsening situation is playing out at its schools, where tens of thousands of students are in quarantine for possible COVID exposure after just one week of classes.

Data submitted by about 800 schools to the Mississippi State Department of Health last week shows that 20,334 students – or 4.5 per cent of the public school population – have already been affected in the early days of the school year.

More than 4500 students and 948 teachers and staff contracted the virus between August 9 and Friday, according to the health department.

“When you look at a number like 20,000 students that are on quarantine in any given week, that exceeds what we’ve experienced . . . when we were at our previous peak for the impact on the schools,” Mississippi State Epidemiologist Paul Byers said in a call with state paediatricians, according to NBC News. “These disruptions . . . are going to continue for a while.”

Republican Governor Tate Reeves, who has denounced mask mandates as “foolish” and “harmful,” recently said he has “entrusted” schools districts to decide whether students and teachers should wear masks. The Republican governor told reporters last week that it’s “very rare that kids under the age of 12 have anything other than the sniffles” when they contract COVID.

But the concerns of parents and school officials over masking in schools were amplified more when 13-year-old Mkayla Robinson died of COVID on Saturday, just hours after she tested positive for the virus. 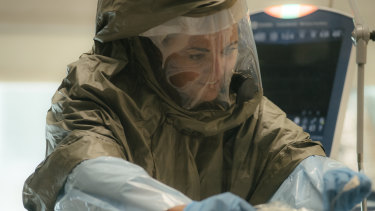 The unvaccinated South has been hit hard by the Delta variant. A nurse checks on a patient in the ICU COVID-19 ward at NEA Baptist Memorial Hospital in Jonesboro, Arkansas.Credit:Bloomberg

The eighth-grader from Raleigh, Mississippi, who became the fifth child in the state to die of the virus since March 2020, had attended classes in person most of last week before testing positive on Friday. Her death came days after parents and officials in Smith County, where Mkayla went to school, pleaded for schools to offer stronger virus protections for children returning to the classroom.

Despite Dobbs’s efforts pushing for people to be vaccinated, millions of residents continue to be hesitant or outright reject the vaccine.

The state health department revealed Wednesday that at least one person has been hospitalised for ingesting ivermectin, a drug intended for treating worms in livestock, in an act, Dobbs said, allegedly done to help treat COVID-19.

It’s unclear whether the person is a resident or what their current condition is, according to the Mississippi Free Press. There is no scientific evidence that ivermectin is effective at treating COVID-19, Dobbs said, and health officials stressed that anyone ingesting the livestock drug faces “potential toxicities.”

A baffled Dobbs then compared taking ivermectin for COVID-19 to getting chemotherapy at a feed store.

“I think some people are trying to use it as a preventative, which I think is really kind of crazy,” Dobbs said. “So please don’t do that.”