New York: US President Donald Trump's former personal lawyer and fixer Michael Cohen has been sentenced to three years in prison for a string of offences, including campaign law violations he said he committed at Trump's direction.

US District Judge William Pauley said Cohen needed to spend significant time in jail because he had committed a "veritable smorgasbord of fraudulent conduct" and was motivated by "personal greed and ambition". 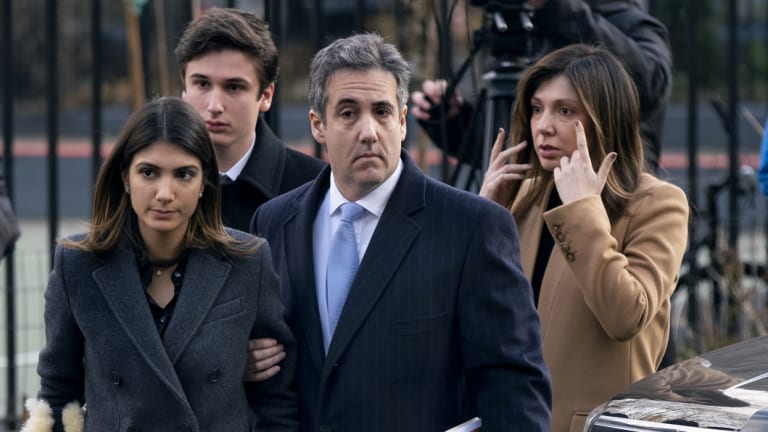 Michael Cohen arrives at a New York court on Wednesday with his wife (right) and two children. Credit:AP

Cohen, who worked for Trump from 2006 until this year, also admitted to lying to Congress about Trump's plans to build a tower in Moscow because the truth would have conflicted with Trump's political messaging.

Choking back tears, Cohen said: "I have been living in a personal and mental incarceration ever since the day that I accepted the offer to work for a real estate mogul whose business acumen I deeply admired."

Referencing a tweet in which Trump called him weak, Cohen said: “It was my blind loyalty to this man that led me to take a path of darkness instead of light. I felt it was my duty to cover up his dirty deeds.”

During the sentencing hearing in Manhattan, Pauley said: "Mr Cohen appears to have lost his moral compass.

"Mr Cohen's crimes implicate a far more insidious crime to our democratic institutions especially in view of his subsequent plea to making false statements to Congress… He thrived on his access to wealthy and powerful people, and he became one himself."

Cohen pleaded guilty in two separate cases. One was brought by special counsel Robert Mueller over Cohen’s lies to Congress. The other was brought by federal prosecutors in New York over tax and bank fraud allegations and campaign finance violations.

Pauley, himself a Long Islander, said that Cohen had a "comfortable childhood and had all the comforts of growing up in an upper middle class suburb on Long Island".

Cohen will have to surrender to authorities by March 6.

Prosecutors had sought a jail term of four years.

After the hearings Cohen's lawyer Lanny Davis said: "At the appropriate time, after Mr Mueller completes his investigation and issues his final report, I look forward to assisting Michael to state publicly all he knows about Mr Trump – and that includes any appropriate Congressional committee interested in the search for truth and the difference between facts and lies.

Trump and his lawyer Rudy Giuliani have tried to distance the President from the Cohen case, saying he was a confessed liar who could not be trusted.

Trump has called the hush-money payments "a simple private transaction" that did not amount to a campaign finance violation.

“Lawyer’s liability if he made a mistake, not me,” Trump wrote on Twitter.

When prosecutors made their final filing in the Cohen case last week, Democratic congressman Adam Schiff, the likely incoming chair of the House Intelligence Committee, said: "My takeaway is there's a very real prospect that on the day Donald Trump leaves office the Justice Department may indict him, that he may be the first President in quite some time to face the real prospect of jail time."