President Trump’s victory declaration, and surprise order for the US military to fully and rapidly withdraw its 2000 military personnel from Syria, has dismayed his coalition allies and senior advisers, and pleased his adversaries. It is somewhat reminiscent of President George W Bush’s premature “mission accomplished” declaration in Iraq.

Pentagon and State Department officials are now scrambling to implement the abrupt reversal of US policy – from expecting to have military forces in Syria for several years to ensure the long-term defeat of Islamic State (and counter Russian and Iranian influence), to having nobody on the ground. 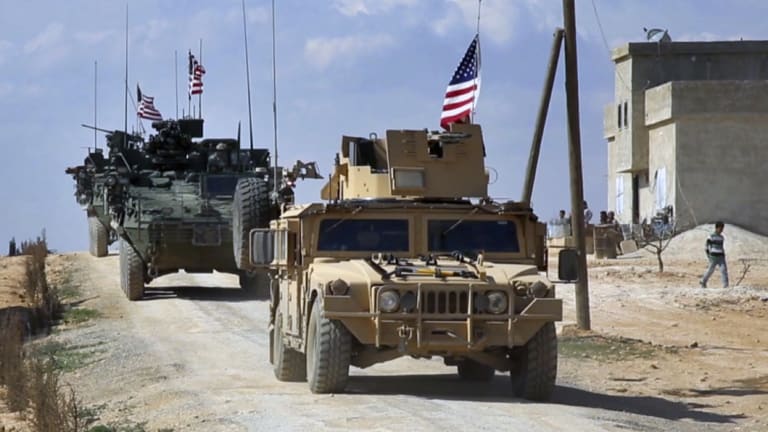 A frame grab from video provided by Arab 24 network shows U.S. forces patrol on the outskirts of the Syrian town Manbij.Credit:AP

The US military presence in Syria currently consists of a training team in southern Syria near the border of Iraq and Jordan with the main force in northern Syria providing intelligence and air support to Kurdish forces fighting Islamic State.

The small US force is a low-cost presence in terms of financial cost and military casualties (five American servicemen killed so far), but plays an important role in showing that the US maintains a strategic interest in the Levant.

However, according to Trump, the forces of Islamic State had been defeated and US troops can now come home. On Wednesday he tweeted: "We have defeated ISIS in Syria, my only reason for being there during the Trump presidency."

Trump’s victory claim was soon contradicted by British Defence Minister Ellwood who responded “I strongly disagree. It has morphed into other forms of extremism and the threat is very much alive.”

American forces were not alone on the ground. British special forces (with some integrated Australians) have been operating very successfully in remote areas of Syria and Iraq against Islamic State. France too has special forces in northern Syria. But the few hundred British and French troops are dependent on US logistical support, so it will be difficult for them to remain after the US leaves.

The withdrawal announcement clearly came as a surprise at the Pentagon. While tracking down remaining Islamic State fighters was still a US priority, the US-led military campaign had shifted towards a long-term program of stabilisation, capacity-building and training.

General Dunford, the chairman of the US Joint Chiefs of Staff, America’s most senior military officer, said earlier this month that there was a long road ahead to achieve stabilisation of the situation. He said that it would require the training of 35-40,000 Arab and Kurdish troops to maintain stability -and the US was only 20 per cent of the way there yet.

Syria’s continuing significance was underlined at the NATO summit in July 2018 where it was agreed: “The ongoing crisis in Syria has a direct effect on the stability of the region and the security of the alliance as a whole.”

Trump’s claim to have defeated Islamic State is at odds with his own administration’s assessments. In August 2018, the Pentagon estimated there were still as many as 14,500 Islamic State fighters in Syria.

Islamic State has certainly lost a lot of territory and is down to perhaps a third of the fighters it had at its peak, but is still powerful enough to overrun isolated government outposts. Its main concentrations are now in eastern Syria in the Middle Euphrates River Valley, along the Syria/Iraq border, and in northern Syria and Iraq.

The December 2018 edition of the respected CTC Sentinel noted that in some areas the frequency of Islamic State attacks is actually rising, and observed that Islamic State forces are carefully picking their targets and opting for “quality over quantity” to ensure an enduring presence: “Within one 40-by-40-mile area, they killed 37 tribal leaders in 10 months… The impact of those killings is that thousands more are intimidated – they will not want to work with local officials and put themselves at risk.”

Kurds will feel particularly betrayed by Trump’s decision. US-backed Kurdish YPG/YPJ fighters have been engaged in doing most of the heavy fighting against Islamic State. So far, nearly 7000 of them have been killed in Syria alone.

The US presence has also served to protect the Kurds against Syrian and Turkish forces. Kurds dream of a Kurdistan that includes parts of bordering Syria and Turkey. Turkish President Erdogan will now use the pretext of Kurdish terrorists threatening Turkish sovereignty to mount military operations against Kurdish forces in north-eastern Syria and northern Iraq.

Trump spoke to Erdogan before his withdrawal announcement, which will create suspicions that some sort of deal was agreed whereby Erdogan eases off on the Khashoggi killing and Trump abandons the Kurds.

Iran and Russia both aspire to dominate in the region, so the withdrawal announcement will have been met with delight in Tehran and Moscow. Iran has provided military and economic assistance to keep Assad in power since June 2013, while President Putin sent Russian military forces to support Syria in 2015, the year after the US entered the war.

It is in both Iran’s and Russia’s interests to see the American military leave Syria and for Assad to consolidate his power. Israel’s enemy, Hezbollah, the Lebanese insurgent group that is fighting alongside Assad's forces, will also be happy with the unexpected development.

America’s closest regional ally, Israel, seems to have been blindsided as well. Prime Minister Netanyahu had made much of the special relationship between himself and Trump, so the unexpected withdrawal decision would have come as a bitter blow for him personally and will be seen as detrimental to Israel’s national security.

If Trump follows through on his belief that America’s entanglements in the Middle East are a waste of American money and lives – and pulls the 5200 US military personnel out of Iraq as well, Australia will need to be ready – at possibly short notice – to withdraw our 300-personnel Task Group Taji training mission from Iraq.

Clive Williams is a visiting professor at the ANU’s Centre for Military and Security Law and an adjunct professor at ADFA.