So much for ‘draining the swamp’! Trump revokes his own rules preventing White House staff from lobbying in one of his final acts as president

Donald Trump has revoked his own executive order to limit federal administration employees from lobbying or working for foreign countries in one of his final acts as president.

Early on Wednesday morning, Trump rescinded the order, one of the few steps he has taken towards fulfilling his campaign promise to ‘drain the swamp’ by putting an end to the practice of individuals landing lucrative private sector jobs off the back of their government posts.

The original order required staff to sign a pledge that they would never become registered foreign lobbyists and prevented them from lobbying the federal agencies where they worked for five years after leaving their government post.

It was signed during a highly-publicised Oval Office ceremony in January 2017.

In contrast, there was little fanfare when the White House released the directive rescinding the order at 1:08am on Wednesday.

No explanation was given for why Trump chose to reverse the order It had been signed a day earlier, according to The Washington Post, who reported that ethics experts had pointed out that the 2017 order contained loopholes. 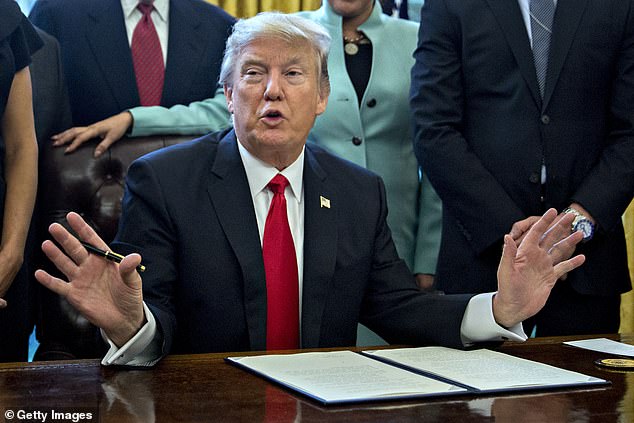 Donald Trump has revoked his own executive order to limit federal administration employees from lobbying or working for foreign countries in one of his final acts as president. Pictured: Trump signing an executive order in January 2017 [File photo]

During his 2016 campaign, Trump pledged to limit the influence of wealthy individuals and organizations in Washington, but made few steps towards achieving this once in office.

The Washington Post found that among the many promises Trump made to ‘drain the swamp’, he only took action on two – including the now-reversed executive order.

At times he even appeared to encourage the very behaviour he’d promised to stamp out, giving wealthy donors access to key officials – including himself – and holding fundraisers.

The government was forced to spend money at Trump’s hotels when he and family travelled, while Trump appointed his son-in-law to serve in a top government role, while making his daughter a senior adviser.

Among his unfulfilled campaign pledges to clean up Washington are pushing Congress to pass a five-year lobbying ban into law and asking Congress to introduce a similar ban on its members.

He also did not act to prevent foreign lobbyists becoming involved in campaign fundraising, which he benefited from, according to The Washington Post.