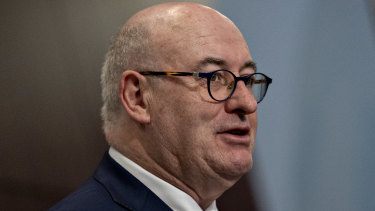 Australia, the US and New Zealand have all banned the telecommunications manufacturer because of security fears.

The UK is poised to make its decision, nearly 12 months overdue, within the next fortnight and appears to be paving the way for Huawei involvement, despite intense lobbying from the US.

The Americans have threatened to withhold Five Eyes intelligence if Huawei is allowed into Britain's critical infrastructure but the EU's new trade commissioner Phil Hogan said he doubted this was true.

"I think that is a bit of sabre-rattling. I don’t think that will actually happen," Hogan told a Global Counsel trade conference via video-link from Washington DC.

"We can call [Trump’s] bluff on that one, the US laying down conditions over Huawei."

In recent years, the EU has had to navigate its relationship with a growing China amid a backlash against Beijing's trade and technology practices by the US.

Hogan said Europe would never adopt a company-ban when it came to Huawei and said trade had to be fair.

"We can’t say to Huawei, 'you cannot come into the EU', that’s not what we want," he said.

"We don’t subscribe to the view that whatever you do you block Huawei."

His comments were echoed by German Chancellor Angela Merkel who said more diversification "so that we never make ourselves dependent on one firm," the Chancellor told The Financial Times.

"I think it is wrong to simply exclude someone per se," Merkel added.

This week national security-focused senators in the US introduced legislation proposing $US1 billion be spent funding "Western-based alternatives" to Huawei.

"US efforts to convince foreign partners to ban Huawei from their networks have stalled amid concerns about a lack of viable, affordable alternatives," the Senators said.

Australian Liberal and Labor governments have imposed bans on Huawei dating back to 2013 based on security grounds. Huawei says it has never spied on behalf of the Chinese Communist Party and even if instructed to under Chinese law would not do so.

But Theresa May's former chief of staff Nick Timothy, who was also her advisor when she was Home Secretary, said anyone who had seen the intelligence would not go near the Chinese firm.

Victor Zhang, Vice President of Huawei, said he was confident the UK government would make a decision based on "evidence."

"We are confident that the UK Government will make a decision based upon evidence, as opposed to unsubstantiated allegations," Zhang said.

"This week the Head of MI5 said, there is 'no reason to think' the UK’s intelligence-sharing relationship with the US would be harmed if Britain continued to use Huawei technology," he said.

But on Thursday the former head of MI6 Richard Dearlove said Huawei posed a security threat "without question."

"It’s a capability in the bank that China will use if it needs to," Dearlove told The Article.

"If the Chinese state says to Huawei 'jump' the company can’t turn round and say 'no'."