Washington: US President Donald Trump is poised to nominate Amy Coney Barrett to the Supreme Court, a decision that will delight the Republican Party's conservative base and reshape the ideological make-up of the court for decades.

Trump will make his official announcement on Sunday (AEST) but multiple US news outlets reported that he will select Barrett, who has been viewed as the frontrunner for the role since the death of Ruth Bader Ginsburg a week ago. 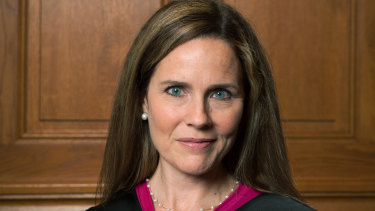 Donald Trump is expected to nominate Amy Coney Barrett to the Supreme Court.

Barrett, 48, is a devout Catholic who has long been viewed as a rising star in conservative legal circles. Her appointment would cement a 6-3 conservative majority on the nation's most powerful court.

Ginsburg on Saturday (AEST) became the first woman and the first Jewish American to lie in state at the US Capitol Building in Washington.

Republicans have moved speedily to fill Ginsburg's seat and appear increasingly likely to install her successor before election day on November 3. The Senate Judiciary will hold confirmation hearings before a full vote on the Senate floor.

Trump has directly tied the confirmation of the new justice to the presidential election.

"I think this will end up in the Supreme Court," Trump said of potential disputes about mail-in-ballots. "And I think it’s very important that we have nine justices."

Barrett is viewed by conservatives as particularly appealing because of her relatively young age, which could allow her to serve on the court and make influential rulings for decades to come.

At 48 she will be the youngest of nine justices on the Supreme Court.

Barrett is currently a circuit judge on the US Court of Appeals for the Seventh Circuit, which covers Illinois, Wisconsin and Indiana. She studied law at Notre Dame Law School in Indiana and went on to teach constitutional law there.

Trump had considered Barrett for his most recent Supreme Court pick in 2018, but he instead chose Brett Kavanaugh who faced a contentious nomination process.

Barrett is likely to face tough questions from Democrats about whether she will uphold the precedent of Roe vs Wade, a decision that established a nation-wide right to abortion in 1973 but is now seen as under threat.

The Supreme Court is also scheduled to begin hearing a case on the legality of the Affordable Health Care, known as Obamacare, the week after the election.

Barrett is widely regarded as an originalist, which means she believes the text of the US Constitution should be interpreted exactly as it was written.

She served as a clerk for Antonin Scalia, the late Supreme Court justice who was beloved by conservatives for his strict adherence to the written text of the Constitution.