London: A former employee of a Spanish security firm has told Julian Assange's extradition hearing of a plan to abduct and even poison the Australian, as part of a widespread surveillance operation said to have been ordered by an associate of US President Donald Trump.

The court also heard claims the Spanish firm targeted Assange and his lawyers by bugging his living quarters inside the Ecuadorian embassy in London, setting up secret cameras and even installing a listening device inside the female toilet where Assange would sometimes hold his meetings because he feared he was being spied on. 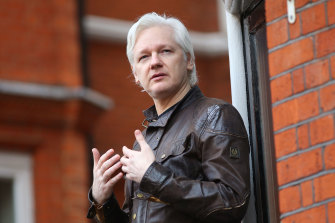 Julian Assange speaks to the media from the balcony of the Ecuador embassy in 2017.Credit:Getty Images

According to the testimony, which was made anonymously in affidavits, the United States organised for laser microphones capable of recording the sound of conversations to be installed inside the building, where the 49-year-old had lived since 2012.

The witness, one of two former employees of Undercover Global SL, also known as UC Global, claimed that the firm's owner David Morales bugged Assange's living quarters in the Ecuadorian embassy on behalf of his "American friends" – the CIA.

Morales' firm provided security services to Ecuador's embassy in London where Assange sought political asylum in 2012, and where he lived until his asylum was revoked in 2019, leading to his dramatic arrest.

Witness One said that Morales told staff his firm had "switched to the dark site," and would be playing "in the big league" or "premier league" by co-operating with the US authorities in a "flashy contract" that was struck between the Spaniard and Trump donor and associate Sheldon Adelson in Las Vegas in July 2016, when Trump was running for president.

"The Americans will get us contracts all over the world," Morales told staff, according to Witness One's statement, which was read out by Mark Summers – one of the QCs representing Assange.

Morales was to supply the Americans with "sensitive information" about Assange and Ecuador's President Rafael Correa, said Witness One. The information was also passed to the Ecuadorian intelligence agency.

The witness said UC Global employees were "fully aware" of and openly referenced the operation to bug Assange, which included a CCTV system that did not record sound.

Witness One told the court that Morales exhibited a "real obsession" in monitoring Assange's lawyers because "our American friends were requesting it".

Witness One terminated the relationship with Morales and sold all shares after realising the full scale of the operation.

Witness Two, an IT expert who joined UC Global in 2015, said in a statement that once Trump had won the presidency, Morales won a contract to provide personal security to Adelson and personally provided services for the tycoon and his children when they visited Europe.

Witness Two said in mid-2017, Morales asked him to establish a taskforce that would solely look after the technical aspects of the video surveillance network of the Ecuadorian embassy.

By the end of that year, Witness Two said he had installed new cameras in the embassy capable of recording sound and lied to Assange when he was asked if the new cameras picked up audio.

The witness testified that orders were given to steal the nappy used on Assange's son Gabriel because the Americans wanted to establish the baby's paternity, correctly suspecting that it was Assange's secret love-child.

Witness Two refused and instead tipped off Stella Moris, Assange's fiancee, to stop bringing the child to the embassy.

Witness Two said in December 2017 Morales said that "the Americans were desperate" and had even suggested "that more extreme measures should be employed against the 'guest' to put an end to the situation of Assange's permanence in the embassy".

"Even the possibility of poisoning Mr Assange was discussed, all of these suggestions Morales said were under consideration during his dealing with his contacts in the United States," Witness Two said in the affidavit.

Assange is facing 18 charges of spying relating to the publication of more than half-a-million military and diplomatic cables on the WikiLeaks website a decade ago.

The evidence tendered by the defence is central to Assange's claim that he is being politically persecuted by the Trump administration and should therefore not be extradited.

His long-running hearing is due to conclude this week after four weeks of evidence. Judge Vanessa Baraitser will make her decision in January but both sides have said they will appeal the decision.