Florida Congressman Matt Gaetz, a key Trump ally, hit out at reports that he has coronavirus Saturday morning, revealing that he tested positive for antibodies but has ‘no clue’ when he was infected.

Gaetz, 38, slammed the publications that claimed he had tested positive, taking to Twitter to brand their stories as ‘false’, ‘fake news’ and ‘barely journalism’.

According to the Washington Post, he had ‘no clue’ when he had the virus and showed ‘zero symptoms’, potentially meaning he could have spread it to others if he was not quarantining while infected. 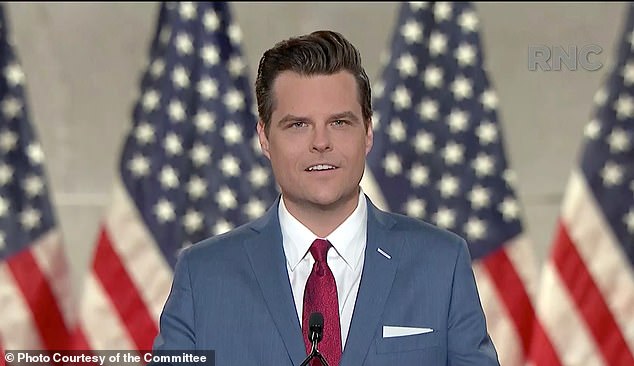 Florida Congressman Matt Gaetz, 38, confirmed on Twitter on Saturday that he tested positive for coronavirus antibodies but has ‘no clue’ when he was infected 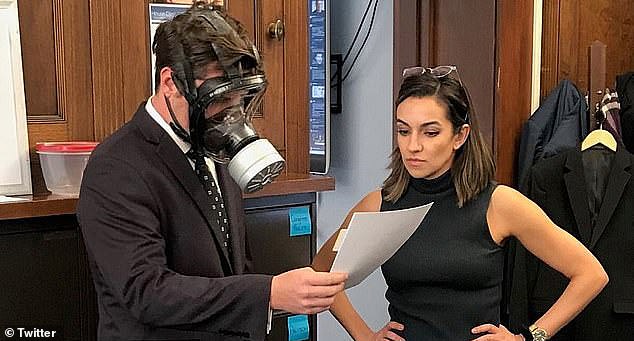 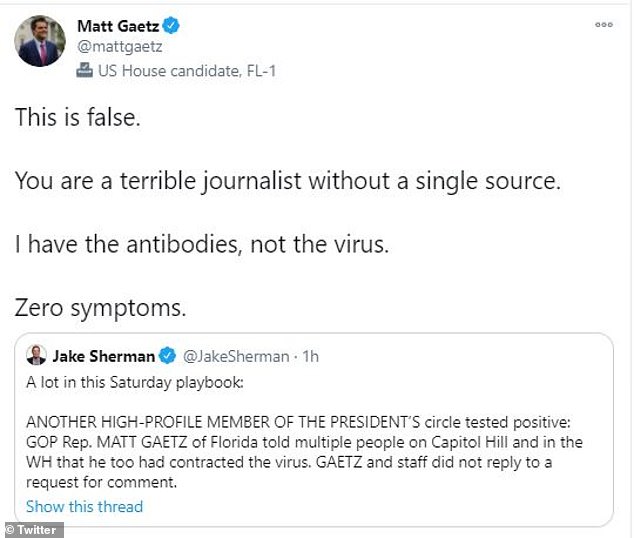 The newly re-elected Congressman previously mocked the pandemic by wearing a gas mask on the House floor in March while voting on an emergency spending bill.

The revelation that he did have the virus at some stage adds to the increasing list of cases that have been linked to the president’s inner circle after it emerged on Friday night that the White House Chief of Staff Mark Meadows tested positive.

The total number of live infections in the White House and in Trump’s campaign rose to seven on Saturday morning.

Gaetz had not previously spoken about being infected but used social media to defend himself Saturday and clear up the claims.

‘This is false,’ he wrote, retweeting the original Politico story that had made the claim he has tested positive. ‘I have the antibodies, not the virus. Zero symptoms.’

‘What Politico told its readers wasn’t true,’ he added.

Politico defended their position with reporter Jake Sherman tweeting: ‘Gaetz told people in the White House and on the hill he had covid last week. He knows that. But this is part of the shtick.’

‘You are fake news. What people Jake? The media has turned lying into an art form. And they rarely get called on their bullshit,’ Gaetz responded.

He later accused them of ‘trying to mislead ppl into thinking I have a recent diagnosis for the virus’. 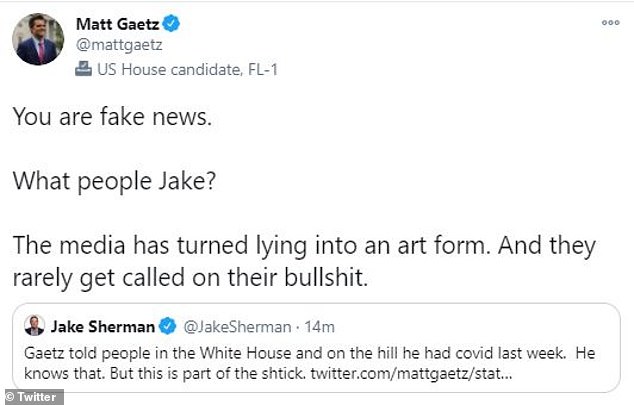 ‘Obviously, if I have antibodies I was exposed at some point, as many have been. I have no symptoms & am keeping my regular schedule,’ he added.

Gaetz, a staunch defender of the president during his impeachment trial, was easily re-elected for his third term Tuesday in Florida’s 1st Congressional District with 64.6 percent of the vote.

This is not the first time that he has been forced to reckon with the impact of the coronavirus pandemic since the gas mask stunt.

He donned the mask on March 4 while he was voting on a bill that would dedicate billion of dollars to combating the nation’s outbreak.

‘Reviewing the coronavirus supplemental appropriation and preparing to go vote,’ he tweeted before entering the House floor.

He ultimately supported the bill ‘because we must have resources now to prevent further spread’ but added that he ‘didn’t feel good about it’.

Yet he was criticized for downplaying the danger of the virus with the mask.

Just five days later, the Trump-loving congressman was forced to quarantine when he came into contact with an attendee at the Conservative Political Action Conference who tested positive for COVID-19. 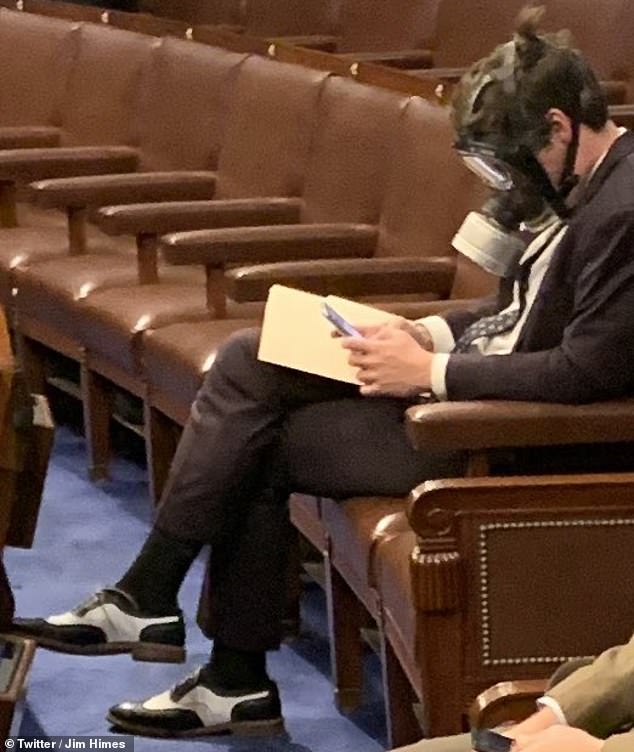 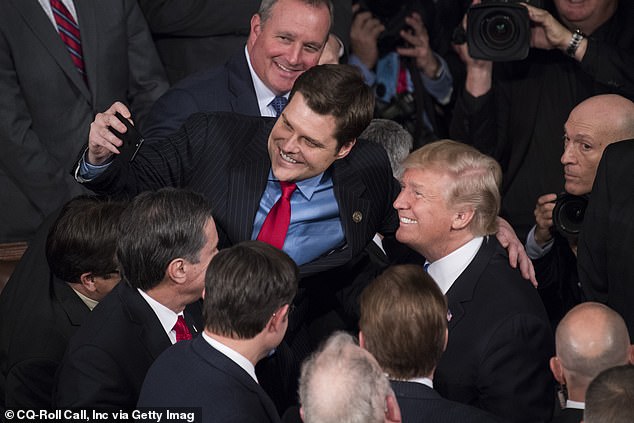 Gaetz is a staunch Trump ally, pictured together above, and was easily re-elected Tuesday

Gaetz has accused Democrats of using the coronavirus as a political took.

‘Coronavirus does not belong to a political party and it should not be a political tool,’ he said on Fox News.

He added that ‘the most relevant factual information’ would ‘help us defeat this virus, not a bunch of Democrats trying to use it to try to weaponize politics against the President’.

This week he also continued to align himself with Trump, pleading with other Republicans to ‘stand and fight’ alongside the president following his likely election loss, the Washington Examiner reports.

He reiterated the president’s unsubstantiated claims that Democrats are using fraudulent voting tactics. 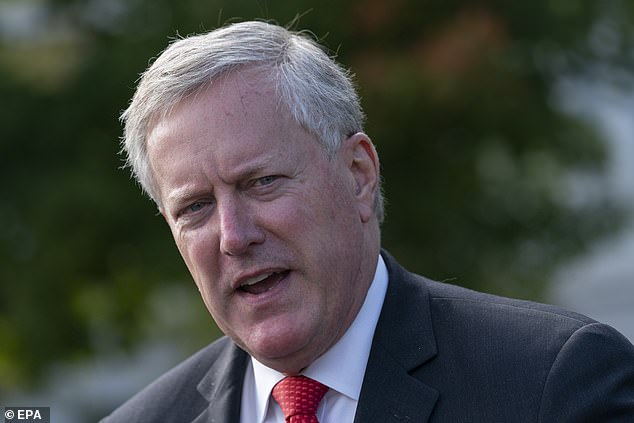 The news that he had coronavirus came as the number of live infections in Trump’s orbit increased to seven, according to ABC News.

Meadows traveled with Trump in the run-up to Election Day and last appeared in public early on Wednesday morning without a mask as the president falsely declared victory in the vote count.

He had been one of the close aides around Trump when the president came down with the virus more than a month ago, but was tested daily and maintained his regular work schedule.

It marked the latest case of the virus in the West Wing, coming less than a fortnight after Marc Short, Vice President Mike Pence’s chief of staff, and other aides tested positive for the virus.

Trump, first lady Melania Trump, and at least two dozen others tested positive for the virus in early October, after Trump held large gatherings of people not wearing face masks, including the ceremony announcing the nomination of now-Justice Amy Coney Barrett to the Supreme Court.

Trump has repeatedly said that the nation is ’rounding the turn’ on the pandemic.

The United States set a record of more than 126,400 confirmed cases in a single day on Friday. 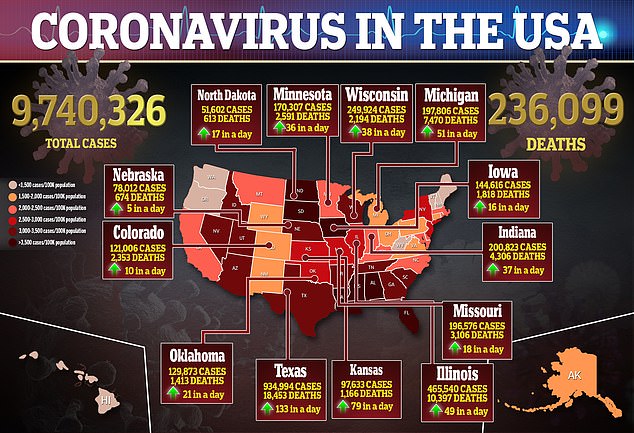 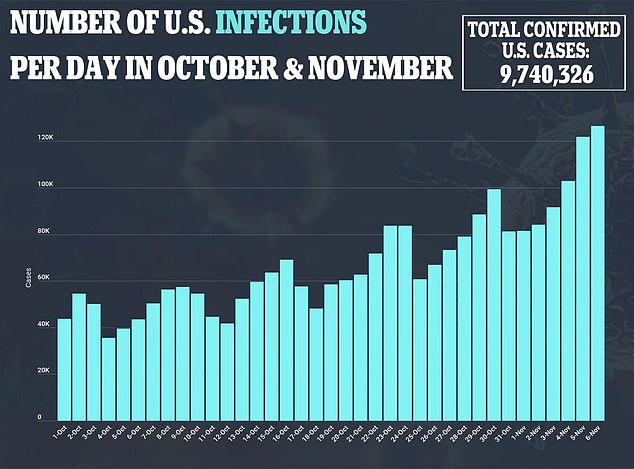 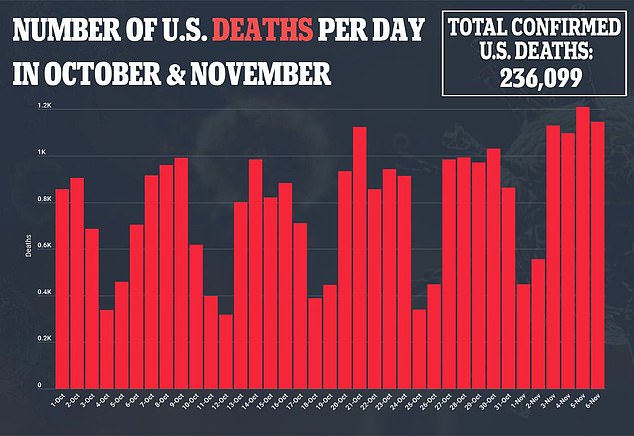