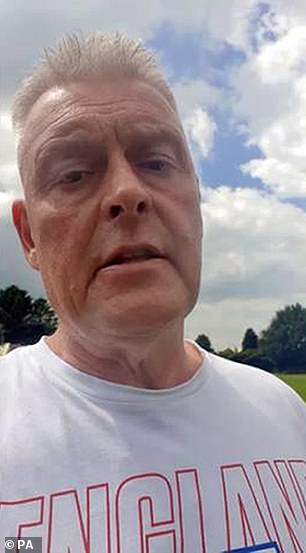 Lee Anderson has refused to watch Gareth Southgate’s team during the tournament in protest at the anti-racism protest that takes place before kick-off.

A Tory MP who vowed to boycott England’s Euro 2020 because of his opposition to players taking the knee has admitted that he will be watering down his protest for Sunday’s final against Italy.

Lee Anderson has refused to watch Gareth Southgate’s team during the tournament in protest at the anti-racism protest that takes place before kick-off.

But the Ashfield MP appears to have found the pull of the Three Lions’ first major final since 1966 too much to take and says he will allow himself to keep tabs on the score via his phone and cheer if England score.

Mr Anderson, 54, a former coal miner, had lashed out at the players taking the knee because it was associated with the Black Lives Matter political movement.

In a video on Facebook, Mr Anderson – wearing a T-shirt with the Three Lions emblazoned on it – said it’s ‘their choice to take the knee and it’s my choice not to watch the matches’ but added he had received abuse about his position.

He said he hoped for an England victory on Sunday night – but confirmed he would not be joining millions of England fans watching the game on television.

‘I’ve had a bit of a torrid week actually, lots of emails, a bit of abuse – but that’s normal – about my decision not to watch the England matches,’ he said.

‘That’s my decision, I’m not forcing my views on anybody else.

‘I don’t like the taking the knee business, I think it associates with the Black Lives Matter movement – I know the England players don’t think it does but it does, it does to me.

‘But that’s their choice to take the knee and it’s my choice not to watch the matches.

‘But I will be supporting England on Sunday night… I’m going to check my phone for updates to see if they’ve scored and cheer if they have.

‘I hope they win and I hope it comes home.’ 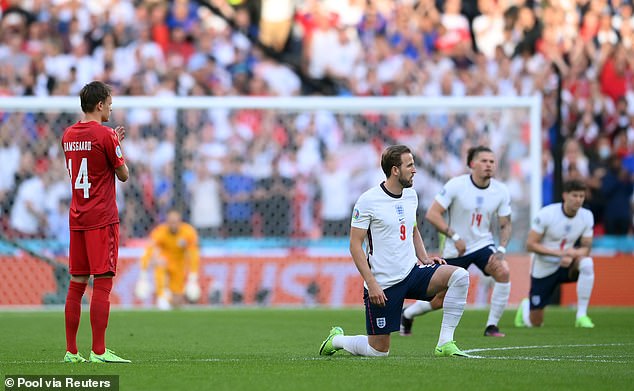 The symbol of anti-racism solidarity gained attention in American football in 2016 as they protested against police brutality and racism in the US.

The act has since spread further and was adopted by football players in the UK partly to demonstrate that racism should not be tolerated in the sport.

There have been incidents of some sections of the audience booing England players as they take the knee before games, but they have been drowned out by cheering as larger crowds have returned for games at the Euros.

Before the tournament began, Mr Anderson said the FA had made a ‘big mistake’ in supporting taking the knee.

He told the Times that Black Lives Matter was a ‘Marxist organisation’, adding: ‘The FA, Premier League and footballers now run the risk of becoming like the Labour Party and that is having nothing in common with their traditional supporters.

‘All forms of racism are vile and should be stamped out, but this is not the way.

‘For the first time in my life I will not be watching my beloved England team while they are supporting a political movement whose core principles aim is to undermine our way of life.’