Three opposition strongholds will see no casting of ballots at all after the authorities canceled the vote there, citing health risks from an ongoing Ebola outbreak and ethnic violence.

Some polling places in the capital Kinshasa had not yet opened more than six hours after the 6 a.m. (0500 GMT) start.

Elections are a rare event in Congo, which has been plagued by authoritarian rule, assassinations, coups and civil wars since independence from Belgium in 1960.

If President Joseph Kabila, in power since his father’s assassination in 2001, steps down after the vote it will be the country’s first ever democratic transition.

Kabila voted early in the morning in the capital Kinshasa at the same school as the candidate he is backing, former interior minister Emmanuel Ramazani Shadary, whom the latest opinion polls showed trailing two opposition candidates.

“My only concern is that we have this very heavy rain and probably voter turnout might be low, but hopefully the skies will clear, and the voters will turn out in numbers,” Kabila, wearing a dark blue suit, told reporters.

The Catholic bishops conference (CENCO) said voting had not started on time at 830 polling stations, equivalent to about one-fifth of the stations across the country where it had deployed observers. It also said 846 polling stations were installed in “prohibited places” like military and police posts.

“Some (voters) do not even know how to use the voting machine,” said Kayembe Mvita Dido, who was waiting in line at a polling station in the eastern city of Goma, in the shadows of the towering Nyiragongo volcano. He was referring to the new electronic voting system, criticized by the opposition as vulnerable to fraud.

Several machines broke down in Kinshasa, Goma and Bukavu, bringing voting in some places to a halt, witnesses said. Some voters complained they could not find their names on the rolls, and flooded streets in Kinshasa prevented others from reaching their polling stations.

In the Kinshasa district of Limete, an opposition stronghold, voting had not begun in at least nine polling stations as of 12:30 p.m. because voting rolls had not arrived, a Reuters witness said.

Militia fighters in eastern Congo’s Masisi territory were also reported around polling sites, where they were pressuring people to vote for their preferred candidates, a Western diplomat said.

“We have some issues and we are handling them all,” electoral commission (CENI) spokesman Jean-Pierre Kalamba said on state television. “When a problem arises … the solution won’t be perfect … We’re choosing the lesser evil.” 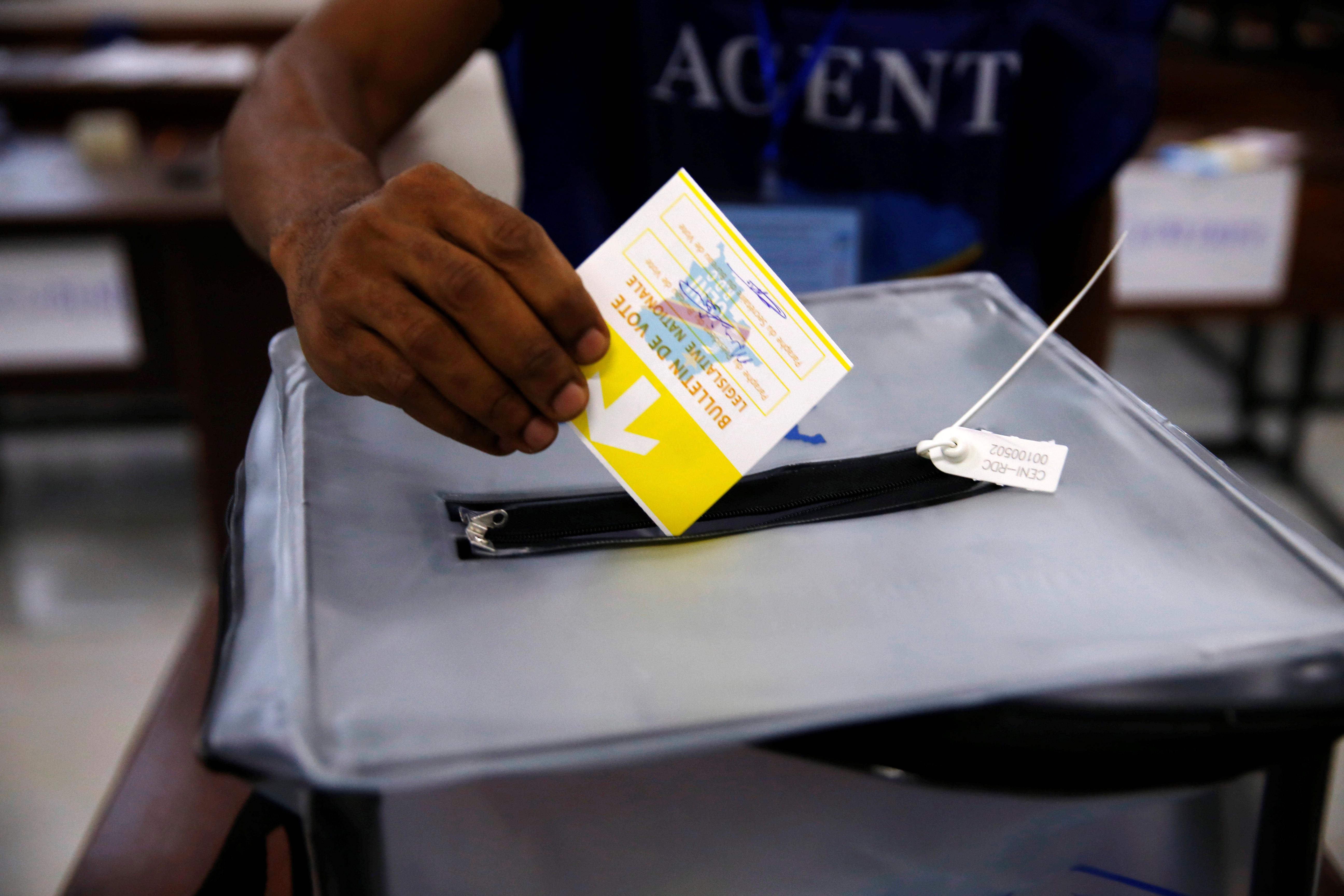 Despite repeated delays to the election, which was originally meant to take place in 2016, diplomats and poll observers have said authorities are ill-prepared, raising fears of a repeat of the violence that followed elections in 2006 and 2011.

Critics, however, say they doubt the vote will be untarnished by fraud, and that Kabila could continue to rule from the sidelines. He has not ruled out running again for president in 2023.

Violent protests erupted this week after authorities announced that voting had been canceled in the Ebola-hit eastern cities of Beni and Butembo, their surrounding areas and the western city of Yumbi.

Together, they account for more than 1.2 million out of 40 million voters nationwide and are all considered opposition bastions.

In Beni, dozens of voters lined up on Sunday morning to write their choices on sheets of paper, residents said.

Under Kabila, Congo has seen strong economic growth from surging copper and cobalt output but only meager improvements to average people’s quality of life.

Another opposition leader, Felix Tshisekedi, trailed in the poll with 24 percent, while Shadary got 19 percent.

“I will vote for Martin Fayulu,” said Mama Wivine, 40 and unemployed, as she waited for the machine to arrive at her polling place in Kinshasa’s Camp Luka neighborhood. “We hope he can bring jobs and better conditions for us Congolese. We are fed up with the regime of Kabila.”

After voting in Kinshasa, Fayulu said: “Today, we mark the end of Mr. Kabila, the end of the misery of the Congolese people.”

“I think victory is on my side and that tonight I will be president,” Shadary said after casting his ballot. 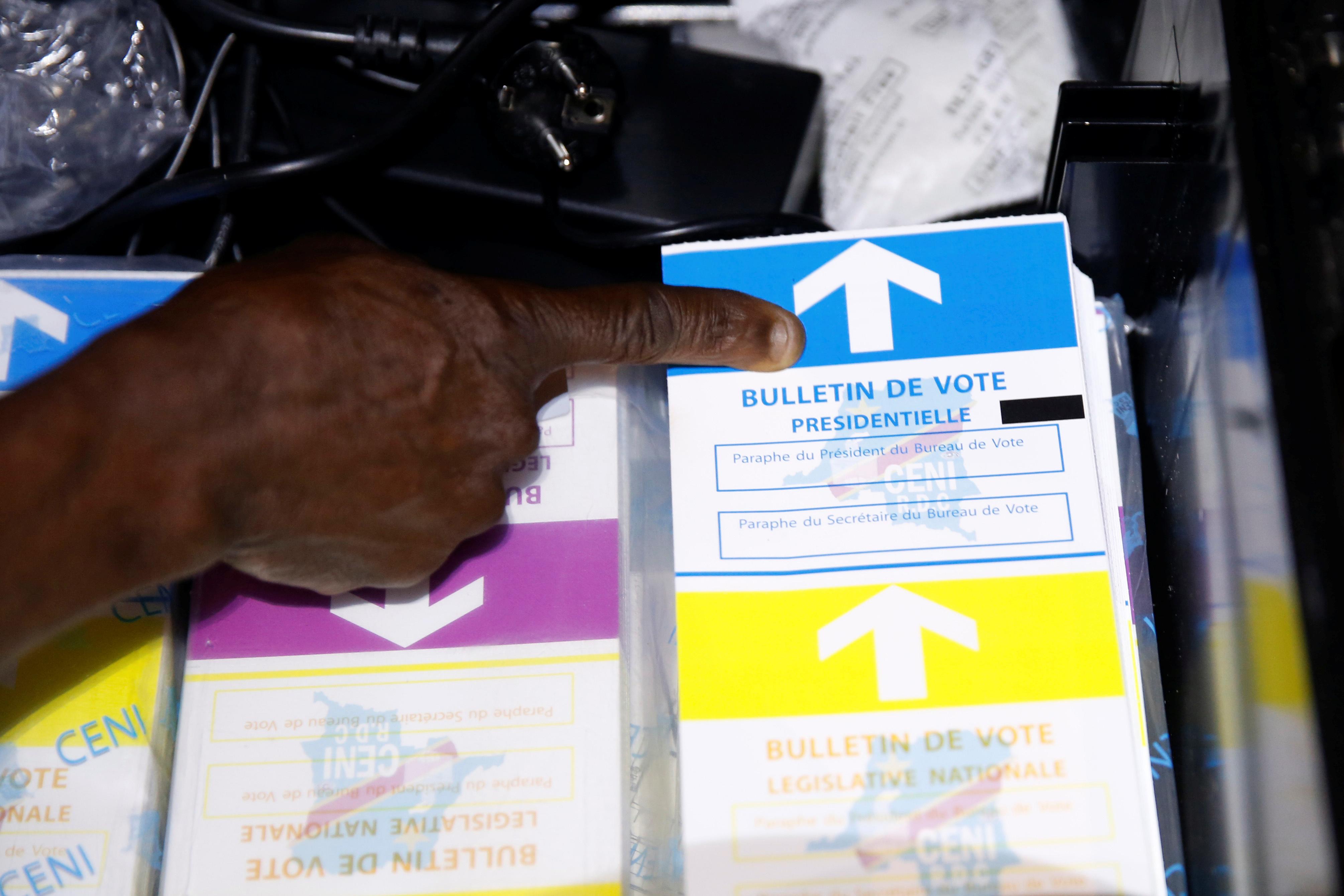 The CENI has tried to reassure the opposition about the voting machines by saying that only print-outs from the machines counted by hand will be factored into the official results.

But any disputed outcome could lead to a wider security breakdown across Congo, particularly along its eastern borders with Rwanda, Uganda and Burundi, where dozens of armed militia are active.

The last polls close at 5 p.m. (1600 GMT), although voting will continue for those still in line. Voters are also choosing representatives for the national and provincial assemblies.