Top to toe in tailbacks! Motorists face chaos will half of all drivers hitting the roads for last-minute shopping trips or Christmas Eve getaways

Drivers embarking on the Christmas Eve getaway or buying last-minute gifts are being warned to expect severe delays in some areas.

Half of UK motorists will take to main roads or motorways on Monday, according to AA research.

Commuter traffic will be reduced as many people booked the day off work for an extended Christmas break. 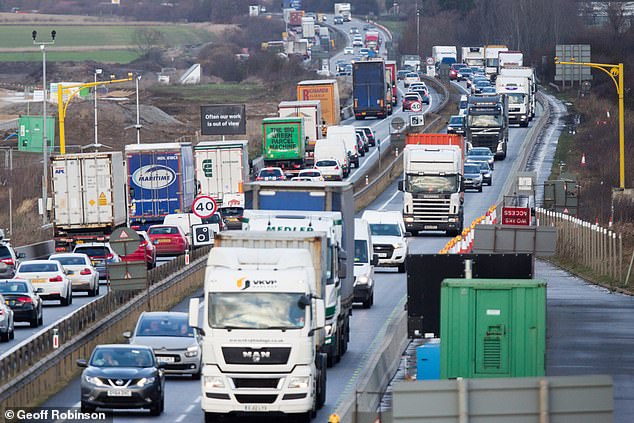 But this will be partly offset by increased leisure journeys, with more than one in five (23%) visiting family and friends and a further 16% making a shopping or other day trip.

Analysis by the RAC and traffic information supplier Inrix predicted that roads will be busiest between 11am and 1pm.

The worst road for long delays is expected to be the M1 northbound from Junction 21 (Coventry/Leicester) to Junction 26 (Nottingham/Ripley).

The M25, M5, M6 and M40 have also been identified as ‘likely to see significant delays’ over the festive period.

Highways England lifted more than 200 miles of roadworks on the country’s motorways and major A-roads on Friday to ensure more than 97% of its network is open.

Anyone hoping to escape motoring misery by catching a train could also face difficulties.

As usual, there will be no trains on Christmas Day and a limited service will run on Boxing Day.

But some of Network Rail’s 330 Christmas engineering projects have already begun, forcing a number of lines to be closed.

There are no services between London Victoria – the UK’s second busiest station – and Clapham Junction until January 2 due to track renewal.

Crossrail work means there are no trains operating to or from London Paddington on Sunday, Monday or December 30, with a reduced service on December 27, 28, 29 and 31.

This could cause problems for airline passengers using Heathrow Airport.

On the London Underground, services will begin to be phased out from 3pm, with most last trains at Sunday times. The Waterloo & City line will be running a reduced service all day, with last trains at about 11.15pm. 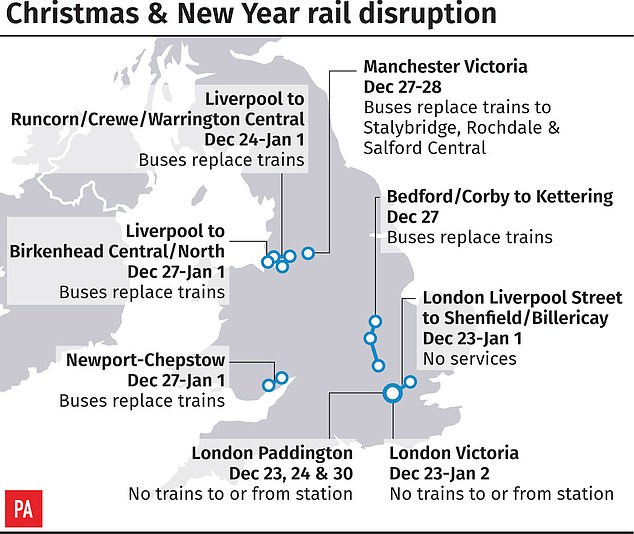 In addition to the threat of long queues, drivers are also being hit with Christmas getaway fuel costs at a five-year high.

The last time prices were this high in the run-up to Christmas was 2013.

RAC fuel spokesman Simon Williams said: ‘Drivers filling up for their Christmas journeys will be right to exclaim ‘bah humbug’ to the retailers this year as it’s much costlier than last year.

‘The frustrating thing is that it shouldn’t be this way.

‘The wholesale price of petrol now is no more than last year, suggesting it has been anything but a season of goodwill for fuel retailers.

‘Many simply have failed to cut their pump prices as far as they should have given the steep decline in the wholesale prices of petrol and diesel.’

There are improvement projects at numerous other locations and passengers are urged to check the National Rail Enquiries website before they travel.

Network Rail’s managing director of strategic operations Andy Thomas said: ‘We know that our railway is up to 50% quieter than usual during the festive period so taking on and delivering these huge transformational schemes at this time of year minimises our impact on passengers.

‘While most of the network is open for business as usual, some routes are heavily affected and so we strongly advise passengers to plan ahead.’

Airports are seeing a spike in demand in the build-up to Christmas.

Services at Gatwick have largely recovered after the drone shutdown which began on Wednesday night.

Travel trade organisation Abta expects more than 4.7 million people to head abroad from the UK between December 18 and January 2.