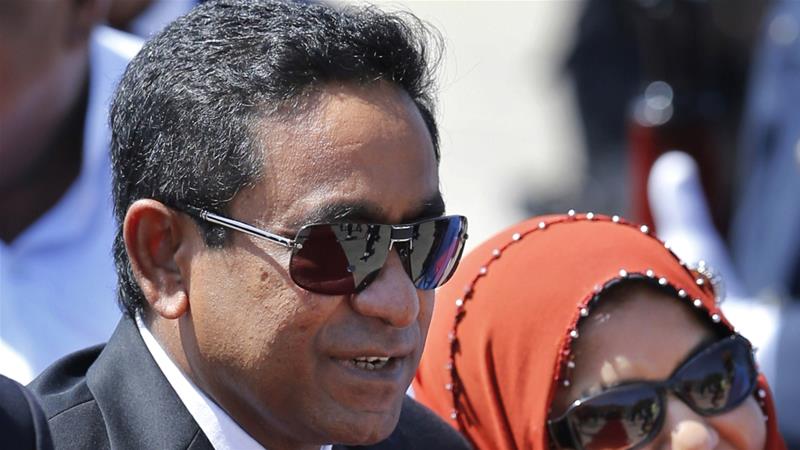 Opposition leaders in the Maldives have petitioned the island nation’s Supreme Court to temporarily remove President Abdulla Yameen and investigate allegations of corruption against him.

Yameen, 58, dismissed the petition on Monday, telling his supporters in the capital, Male, the opposition was “seeking to overthrow a legitimate government”.

Signatories to the petition filed on Sunday include two former presidents, Maumoon Abdul Gayoom and Mohamed Nasheed. The former is Yameen’s half-brother.

The opposition leaders said Yameen must be suspended for misrule, rights abuses, and “unprecedented corruption, including unjust enrichment from appropriation of state properties and funds for personal benefit, for the benefit of his family and political associates”.

Al Jazeera, in an expose in 2016, revealed how Yameen and his former deputy coordinated the theft of millions of dollars in tourism revenues. In secretly filmed confessions, three of the former vice president’s associates also explained how they carried cash to the president.

One of the men, Mohamed Allam Latheef, said he had deposited cheques worth $1m into the president’s private account, a claim confirmed by the anti-graft watchdog last year.

But the Anti Corruption Commission deferred the case saying it was not able to question Latheef because he had fled the country.

A spokesperson for the Supreme Court told Al Jazeera the judges have not yet commented on whether they would hear the petition.

Mariyam Shiuna, executive director of Transparency Maldives, an anti-corruption group, said she doubted if the Supreme Court, which has ruled in favour of the government in the past, would act on the case.

The opposition was “clutching at straws in a bid to make some headway in holding President Yameen accountable”, she said, adding the move also demonstrated the opposition’s lack of confidence in the prospect of a free and fair vote when the country goes to a general election later this year.

The opposition alliance said it turned to the Maldives’ top court because parliament, which has the power to remove a president from office, had ceased to function after the military stormed the building last year to block the impeachment of the parliament speaker, a key ally of Yameen.

The Maldives has been mired in political unrest since Nasheed, the country’s first democratically elected leader, was jailed in 2015 on “terrorism” charges.

The trial, which a UN rights panel declared unfair, prompted widespread protests and resulted in the arrest of hundreds of dissidents.

Since then, almost all key opposition leaders have either been jailed or gone into exile. In 2016, Nasheed also sought political asylum in the United Kingdom after traveling there on medical leave from prison.

Meanwhile, 12 ruling-party legislators who defected to the opposition were stripped of their seats last year.

The crackdown on dissent has raised fears of instability ahead of this year’s presidential election.

“Civil and political liberties are severely restricted… In such an environment it is difficult to say that the 2018 elections will be free or fair.”

Yameen is facing a coalition of four opposition parties led by Gayoom and Nasheed.

On Monday, Yameen ordered the re-arrest of Gayoom’s son, Faris Maumoon, days after the ruling party lawmaker was conditionally released from jail, where he had been held for six months on charges of bribery.