The man who put SEX into symphonies: To Brits, he was ‘Andrew Preview’, the conductor who starred in THAT Morecambe and Wise classic. But Previn was also a legendary Lothario who wed five times (and turned down Ava Gardner)

Andre Previn, who died aged 89 at his New York home yesterday, was also the enfant terrible of film score writing — but his four Oscars were easily pipped by his five marriages.

They weren’t exactly perfect ones and Previn — a German-born American and staunch Anglophile — famously edited the first three wives out of his Who’s Who entry. 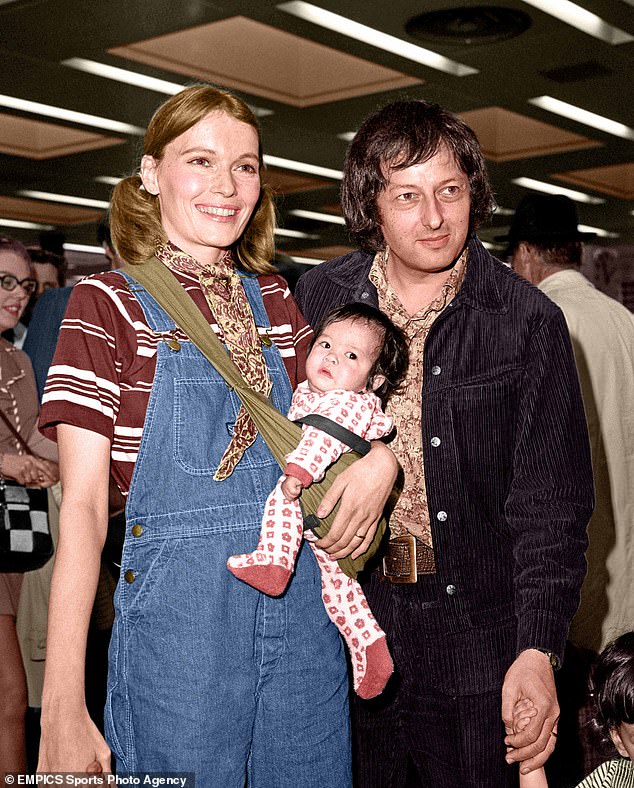 Andre Previn, pictured with his American wife Mia Farrow, left, at Heathrow Airport in London along with their recently adopted Vietnamese daughter Kym

His beautiful spouses included the actress Mia Farrow and renowned violinist Anne-Sophie Mutter, whom he married when he was 73 and she 39. Some wondered what women saw in a small, stooped man with straggly hair, but Previn was undoubtedly a musical genius with immense charm and humour.

For years arguably the most famous man in classical music, he possessed an astonishingly versatile talent — he was an accomplished jazz pianist who played with Ella Fitzgerald as well as a composer who could turn his hand to anything from opera and chamber music to pop. In concerts, he would play classical music before the interval and then switch to jazz.

He was principal conductor of the London Symphony Orchestra in the Seventies and Royal Philharmonic in the Eighties, as well as guest conductor to most of the world’s great orchestras.

He was variously dubbed the ‘wunderkind in a turtleneck’ and the ‘Mickey Mouse maestro’ when he was in his 20s, by which time he was already being compared to the legendary Leonard Bernstein.

His real name is less well remembered. Born Andreas Ludwig Prewin, the precocious musician learned to play piano when he was five. 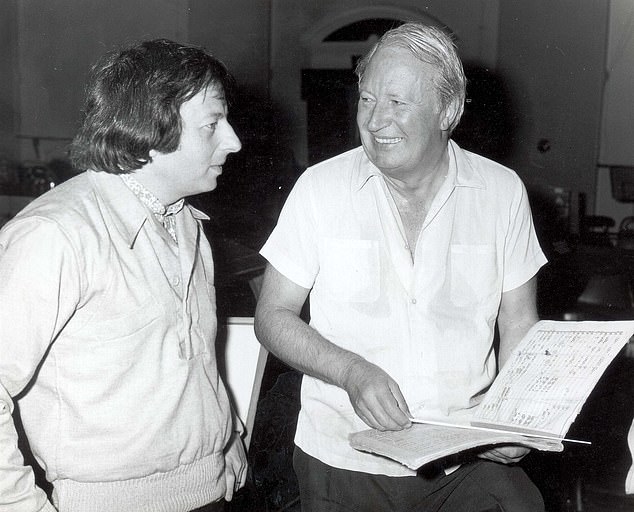 Previn, pictured here with Ted Heath was a former principal conductor of the London Symphony Orchestra

He and his Jewish family fled Berlin to escape the Nazis, and eventually ended up in Los Angeles. Previn, who exploited a family contact in the movie business, wrote his first musical arrangement when he was just 19 to accompany the barks of Lassie.

‘I thought it was easy,’ he later said. ‘But I have since put myself through the wringer of watching it on a television rerun, and it’s the most inept score you ever heard.’

Previn said he was used so much because he was ‘talented, fast and cheap’.

In the Fifties, he was conscripted into the Korean War and was digging latrines when he heard that he had been nominated for his first Oscar for Gigi in 1958.

During his stint in the military, he wrote arrangements for an army band and played in San Francisco jazz clubs.

He went on to become a notorious Lothario but he hadn’t always charmed women. He related how the actress Ava Gardner, then 24, once suggested to the 16-year-old Previn that he take her home.

Too innocent to understand what she meant, he thought she wanted him to call her a taxi.

When they met again two years later, the now wiser Previn suggested they might go back to his place. ‘Go f*** yourself,’ she told him. ‘It’s one of the great sorrows of my life,’ he said years later.

Previn was 23 when he married his first wife, jazz singer Betty Bennett, with whom he had two daughters, Claudia and Alicia. Bennett would later claim that Previn could ‘entertain a girl for hours’, but that girl wouldn’t necessarily be his wife. 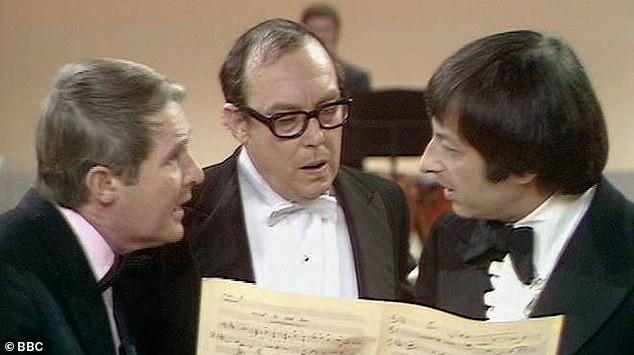 In Britain, Previn is most famous for his sketch with Morecambe and Wise in 1971

The marriage lasted five years before Previn divorced her, just months before she gave birth to their second daughter.

Two years later, in 1959, he married again. Dory Langdon was an aspiring lyricist and singer who saw him on TV and decided she had to meet him.

The determined Ms Langdon got a job at MGM Studios, to which he was contracted, and they were soon a couple. They would go on to become a successful writing partnership, penning songs for Frank Sinatra, Judy Garland and Tony Bennett.

But after nearly a decade together, Previn left her for 25-year-old actress Mia Farrow, the winsome star of Peyton Place. He ended his marriage after Farrow became pregnant.

Devastated, Dory recorded an album of searingly heartfelt songs about love and loss, including one titled Beware Of Young Girls. She was later diagnosed as schizophrenic and — literally — dragged screaming to a mental hospital, where she reportedly underwent electric shock therapy. She never publicly blamed Previn for the years she spent in and out of psychiatric institutions. 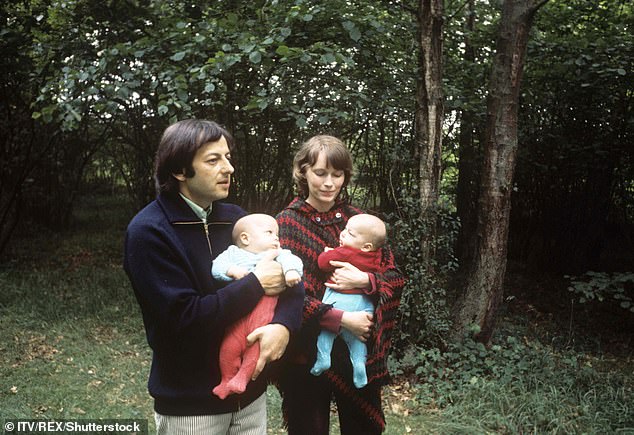 Previn, pictured with Mia Farrow in 1970 with their twin sons Matthew and Sascha

Farrow, who was emerging from a short-lived marriage to Sinatra, was 16 years Previn’s junior. They married in 1970 — three years after he had turned his back on Hollywood to become a conductor. He became principal conductor of the London Symphony Orchestra in 1969 and they lived in rural Surrey and had three sons — twins Matthew and Sascha and Fletcher — as well as adopting four more children.

One of those, Korean orphan Soon-Yi, was later to be at the centre of Farrow’s explosive split from Woody Allen, her next famous lover, after he started an affair with the young Soon-Yi, whom he later married.

Previn’s wandering eye did not stop during his marriage to Farrow. Previn — who, in flares and mop-top floppy hair — looked more like a Beatle than a classical conductor, struck up a close relationship with a music critic named Gillian Widdicombe. During a rehearsal at the Royal Festival Hall, Farrow hit Widdicombe with her handbag and screamed: ‘Take that, you middle-aged groupie.’

This time it was his wife who made the first move to end their marriage, with Farrow having an affair first with a Norwegian cameraman and later with Woody Allen.

Although they divorced in 1979, Previn would side with Farrow when the scandal over Allen and Soon-Yi broke. He cast Allen as a predator and said Soon-Yi had been helpless to resist his advances. 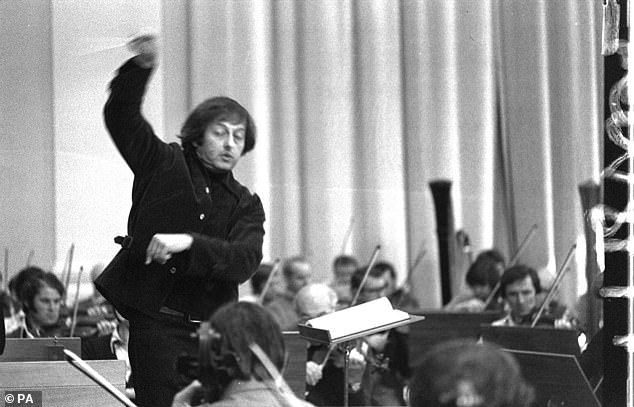 He refused to talk to Allen for the rest of his life. And of Soon-Yi, Previn said: ‘She does not exist.’

Previn was immensely successful at the LSO, bringing classical music to the masses. However, he stepped down in 1979 and three years later wed wife number four.

His marriage to Heather Sneddon, daughter of a Foreign Office official and ex-wife of actor Michael Jayston, proved to be his longest.

They had two children — Li-Ann, who was adopted, and Lukas — and Previn wrote a colourful memoir, No Minor Chords, which was edited by Jackie Onassis, by then a publisher.

The marriage ended after 20 years, in 2002, when Heather cited irreconcilable differences. Her friends claimed Previn’s famous wandering eye had fallen on various women, including a soprano friend of Hillary Clinton. Previn blamed his ferocious ambition and the demands of his conducting career. 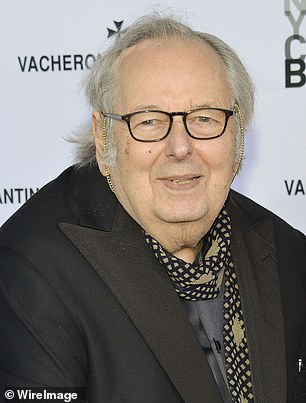 Some men might have got the message by now that perhaps marriage wasn’t for them, but he was undaunted. That same year, he married German violin prodigy Anne-Sophie Mutter in a secret ceremony after they met when he wrote a violin concerto for her. They declared themselves ‘blissfully in love’ and moved into her mansion in Munich.

Mutter, a fellow German, was famous for saying: ‘I have too much fire to ever be burnt out.’ But their marriage had fizzled out within four years.

Friends said their 34-year age difference was to blame. ‘She is a lady with a full social and business itinerary, and word was that he couldn’t keep up,’ said a friend. Such a disdainful remark would have been a cruel blow to the workaholic Previn’s ego.

While they may have begged to differ, Previn insisted that he remained close to all his wives. ‘I like them all,’ he once said. ‘We are the best of friends, which is very nice. I am pleased that there is no acrimony between us.’

Certainly, he and Mutter continued to work together, with Previn churning out pieces for her to play. ‘You know how people say that their marriage didn’t work?’ he said in 2017. ‘With us, the divorce didn’t work. We call each other every day regardless of where we are. It’s like being very best friends who have a romantic history.’

Previn, associated with the LSO for more than 20 years, was knighted by the Queen in 1996 for his ‘outstanding contribution to Anglo-American cultural relations and the musical life of Britain’. But because he was not a British subject, the knighthood was only honorary and he was unable to call himself ‘Sir’. After his years in London, however, he remained an ardent Anglophile, even flying the British flag at his U.S. home.

Nominated 14 times for Oscars, Previn was the only person in the history of the Academy Awards to earn three nominations in one year — 1961. Previn very publicly turned his back on Hollywood in favour of a classical career, but didn’t like being quizzed about it years later, especially if it was suggested the association had tarnished his serious music credentials.

In 1991, he complained he had been focusing largely on classical music since the mid-1960s. He claimed there should be a ‘statute of limitations’ on still bringing up Hollywood. In the U.S., he said, the classical music world ‘would just as soon forgive you for an axe murder as for having done a movie’.

Previn kept working furiously into later life, sometimes performing as both conductor and soloist in the same concert.