The Tampa Bay Buccaneers offense isn't capable of playing well for 60 minutes. If that was going to happen, it would have by this point in the season.

But all the Buccaneers needed Monday night to score a huge win in the NFC South race was play well for about five minutes. And the greatest quarterback in NFL history was there to make sure it happened.

Tampa Bay, which trailed by 13 late in the fourth quarter and looked like it had no chance to put up any touchdowns, scored with three minutes remaining. Then, the defense forced a quick punt and gave the ball back to Tom Brady, who led a game-winning drive. Brady might not be the same player he has been for a couple decades, but he's still capable of some magic moments. Brady hit running back Rachaad White for a 6-yard touchdown with three seconds left, and the extra point gave Tampa Bay a dramatic 17-16 win. The Buccaneers improved to 6-6, and are in position to win a bad division.

The Buccaneers hadn't won when trailing by 8 or more points in the fourth quarter since 2012, ESPN said on its broadcast. They really had no business winning on Monday night. But when Brady needed to make some plays in crunch time, he came through like he has so many times before.

Before Monday night, Brady was 0-37 in the regular season and 1-43 in the playoffs when trailing by 13 or more points in the fourth quarter, according to ESPN Stats and Info. The only win when facing that type of deficit before the comeback against the Saints was Super Bowl LI against the Atlanta Falcons.

Bucs struggle to move the ball

The game started well for the Buccaneers. They had a 16-play, 72-yard drive and even though it ended with a field goal, it was a positive start.

Then Tampa Bay stopped scoring. For the rest of the half they had three punts, an interception and they kneeled to end the first half.

New Orleans wasn't much better on offense but the Saints did hit a 30-yard touchdown pass to Taysom Hill. They got a field goal late in the half and led 10-3 at halftime. Offensively it wasn't a great performance, but the defense kept the Saints in the game.

The Saints haven't done a lot right this season, but coach Dennis Allen has been fantastic against Tampa Bay during the Brady era. Last season, the Saints shut out the Buccaneers 9-0. Since he joined the Buccaneers, Brady was just 1-4 against the Saints in the regular season coming into the day (though the Bucs did get a playoff win over New Orleans on their way to a Super Bowl title).

For about 55 minutes, it looked like Allen had Brady's number again and the Saints, who were 4-8 coming into the game, would get back in the NFC South race with a huge win. But Brady found a way, somehow. 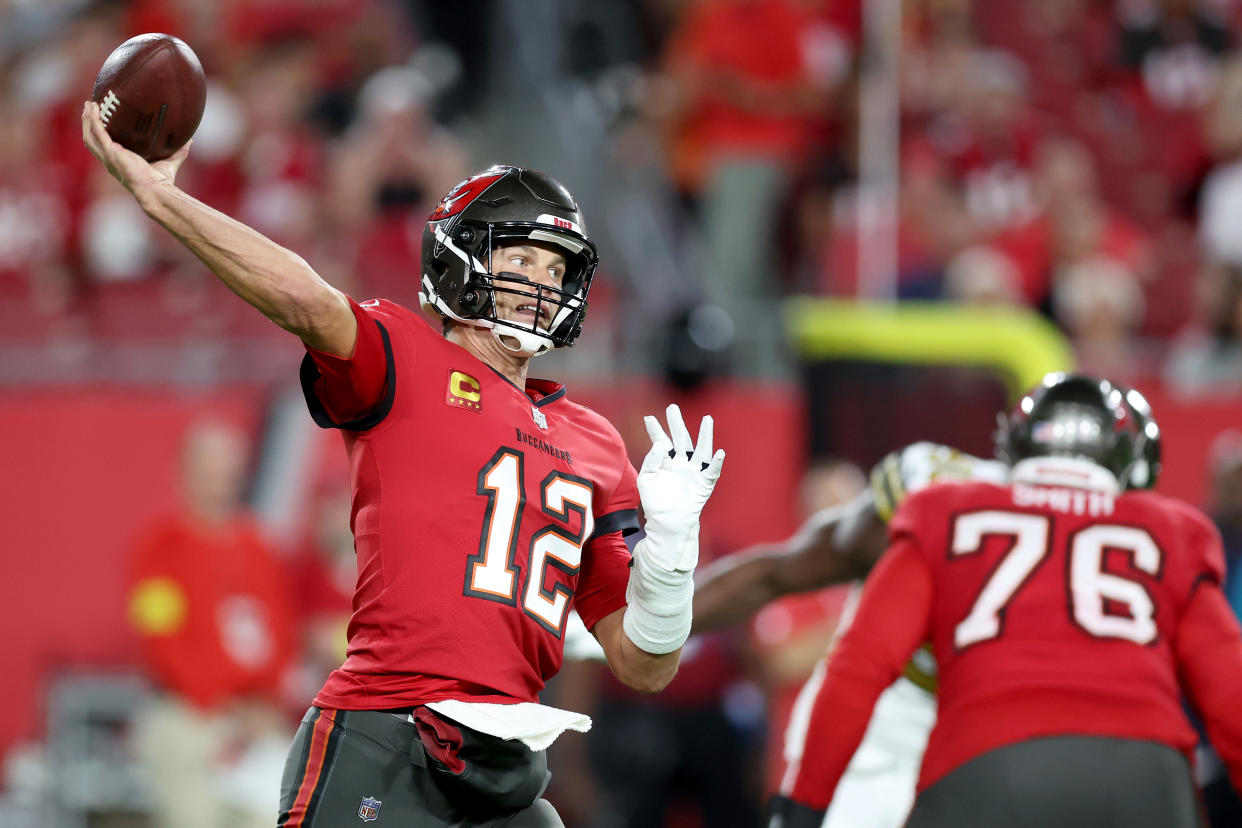 There didn't seem to be much hope for the Buccaneers to come back after the Saints took a 16-3 lead in the fourth quarter. The offense couldn't sustain drives and the defense seemed to be worn out and couldn't get off the field in the second half. The Saints had two marathon drives. Both drives ended in field goals but it wasn't like Tampa Bay was scoring quickly. Or at all.

In the fourth quarter, with about seven minutes left, the Buccaneers faced fourth-and-10 in their own territory. Brady tried to lobby the coaches to go for it. Tampa Bay left the offense on the field for a moment, then sent on the punt team. It made some sense to go for it there, but Buccaneers coach Todd Bowles punted and relied on his defense.

The Buccaneers finally came alive on offense. They scored with three minutes left. A pass interference call on a long pass to Mike Evans set up a 1-yard touchdown pass to tight end Cade Otton. The Buccaneers got a three-and-out to force a punt after that, with a huge hit from safety Keanu Neal knocking a great Andy Dalton pass incomplete from Hill's hands. That gave Brady a chance to pull out a game that was incredibly ugly for Tampa Bay through three-and-a-half quarters.

Brady came alive for the two-minute drill. Scotty Miller caught a first down to the Saints' 20-yard line. Julio Jones made a circus catch down to the 5-yard line with about 30 seconds left. Chris Godwin caught what would have been a touchdown but left tackle Donovan Smith was called for a holding penalty, which put the Buccaneers in a tough spot. It didn't matter. Brady just threw another touchdown pass.

The Buccaneers aren't very good this season. But they're likely to go to the playoffs. And Brady showed that he's still capable of making some memories. At 45 years old, he's still adding to his legacy.