The Tim Davie Doctrine: New BBC boss releases guidance for staff on social media and impartiality after vowing to crack down on outspoken stars

The BBC’s director-general has today published his tough new rules on staff using social media and undertaking lucrative outside work.

Tim Davie has launched a radical shake-up of the broadcaster in the wake of damning criticisms that dogged his predecessor and cast doubt on the corporation’s future.

When he came into the post in September, Mr Davie announced an impartiality crackdown, warning staff he would be bringing in stringent new measures – and telling them they would face the sack if they fell foul of the rules.

The guidelines also clamp down on high-profile presenters topping up their already hefty salaries by moonlighting for private companies.

The new social media guidance, which applies to employees of the BBC using social media in their professional or personal capacity, has four rules to be followed.

They include not bringing the ‘BBC into disrepute’ and also to maintain impartiality if required, meaning staff should not ‘express a personal opinion on matters of public policy, politics, or ‘controversial subjects”. 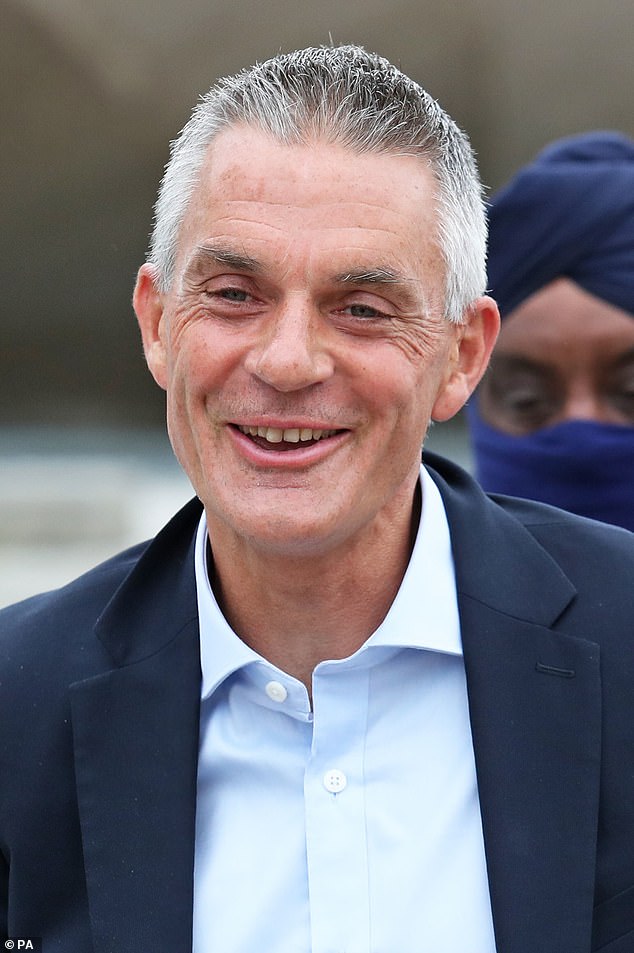 The former England striker said he welcomes the debate that comes with discussing his opinions – and hopes he can influence ‘one or two’ people.

Lineker, pictured, told the Between the Lines podcast: ‘I don’t think my views are any more important than anyone else’s.

‘People will disagree with me and that’s fine – I don’t mind debate… I don’t understand abuse.

‘I will share my views and obviously, I believe in what I say and I will stand up for it.’

Another of the rules urges staff: ‘Do not criticise your colleagues in public. Respect the privacy of the workplace and the confidentiality of internal announcements’.

The new set of rules and guidance include updated guidance on impartiality, a guide and rules on the use of social media, rules around external engagements for news presenters and senior staff, as well as a ‘safeguarding impartiality’ training programme.

Davie – who took over the BBC on September 1 – said that under the new guidelines, staff will now have to declare ‘certain types of work undertaken outside of the BBC’, akin to declarations required for members of parliament.

The 53-year-old has said the rules would be enforced, adding that he is prepared to sack presenters and ‘take people off Twitter’.

The overhaul by Davie, a former PepsiCo executive and Conservative party member, comes after a number of impartiality rows including Emily Maitlis’ Newsnight monologue in May about the Dominic Cummings lockdown furore.

She said the Prime Minister’s chief adviser broke the rules and ‘the country can see that’.

There will now be a ‘standardised approval process to ensure consistency and a central register of requests in each department.’

The BBC will publish a quarterly summary of engagements – starting in the New Year – for all senior leaders, presenters and on air staff working in journalism roles across the broadcaster.

When using social media, staff are urged, ‘not be drawn into ill-tempered exchanges, or exchanges that will reflect badly on you, or the BBC.’

They are also told never to post, ‘when your judgement may be impaired’, and, ‘never use your BBC status to seek personal gain or pursue personal campaigns.’

The updated impartiality guidelines now state: ‘It is essential that those engaged in the production of news and current affairs and factual journalism in particular say nothing publicly which could be interpreted as bias on politics or public policy issues, or controversial issues.’

Things to DO: Ten things staff should not do under the BBC’s new social media rules

1. Always treat others with respect, even in the face of abuse

2. Assume anything you say or post will be viewed critically

3. If you know you’ve got something wrong, correct it quickly and openly

4. Remember that your personal brand on social media is always secondary to your responsibility to the BBC

5. Respect the confidentiality of internal meetings and discussion

6. Think about what your likes, shares, retweets, use of hashtags and who you follow say about you

7. Be open to, seek, and respect the widest range of opinion and reflect it

8. Use separate posts on public issues rather than join threads started by others

9. Be careful with rebuttals – they can feed conflict

10. Think how to signal that a post is a professional judgement, not a personal opinion

Things NOT to do: Ten things staff should not do under the BBC’s new social media rules

1. Do not be drawn into ill-tempered exchanges, or exchanges that will reflect badly on you, or the BBC

2. Do not post when your judgement may be impaired

3. Never use your BBC status to seek personal gain or pursue personal campaigns

4. Do not reveal how you vote or express support for any political party

5. Do not offer judgements beyond your specialism

6. Do not support campaigns no matter how apparently worthy the cause

7. Do not post anything that couldn’t be said on-air or on BBC platforms

9. Do not link to anything you haven’t read fully

10. Do not be seduced by the informality of tone and language on social media

Staff are also set to undergo more training in the upcoming months.

The training will cover, ‘updates on the importance of impartiality generally and new social media training’ and will be tailored to specific roles across the BBC.

During the last election campaign, newsreader Huw Edwards liked a tweet of a video which said ‘Vote Labour for the National Health Service’. Mr Edwards later claimed that he had not seen the ‘Vote Labour’ message at the end of the clip.

Political editor Laura Kuenssberg was also criticised after she wrongly claimed on Twitter that a Labour activist punched a Tory adviser. She later apologised.

The BBC has also been on the defensive for failing to police outside activities by presenters. North America editor Jon Sopel was criticised last year for giving a paid speech to tobacco giant Philip Morris International in Miami.

Staff, contractors and freelancers could face dismissal for ‘serious’ breaches of the guidelines, according to the broadcaster.

‘Impartiality is the foundation on which we deliver insightful, exciting and ground-breaking stories,’ Mr Davie said in an email to staff.

He added: ‘These guidelines are intended to help us continue to deliver this, and build audience trust.’

One of the stars potentially in Davie’s sights is former England footballer Gary Lineker, the publicly funded corporation’s best paid presenter, who is an outspoken voice on Twitter.

Lineker and some BBC staff have backed a campaign by Manchester United footballer Marcus Rashford, seeking to force the government to provide free school meals for poorer children outside term time during the coronavirus pandemic.

The director-general is also reportedly planning to axe some ‘left-leaning’ comedy shows that the Conservatives accuse of bias on issues such as Brexit.

Conflicts of interest: The BBC stars topping up their hefty salaries as they cash in with huge payouts from banks, car giants and oil companies

JON SOPEL, £245,000-a-year BBC salary: Jon Sopel, 60, is paid up to £245,000 a year in his role as the broadcaster’s North America Editor, covering all aspects of US news including politics, policy and business.

But the presenter last year sparked a conflict of interest row after accepting tens of thousands of pounds from the biggest bank on Wall Street.

Mr Sopel boosted his pay by speaking at a string of JP Morgan events – despite it posing an apparent conflict of interest.

Jon Sopel presided over two sessions at JP Morgan’s Global Markets Conference in Paris in 2017 – which included an interview with Mr Dimon. And in 2016, Mr Sopel appeared at JP Morgan’s Board Summit in New York. Pictured is Mr Sopel giving an off-the-record keynote address at the world’s biggest tobacco company’s Miami conference in April

And in 2016, Mr Sopel appeared at JP Morgan’s Board Summit in New York, where he interviewed a former president of the European Commission about what Brexit ‘means for global business’.

Sources say he was paid around £35,000 for the Paris conference. He is thought to have received around £20,000 for the New York event.

He is also known to have hosted other JP Morgan events. Mr Sopel’s agent Mary Greenham said: ‘He has done events for JP Morgan and the BBC are aware of this.’

Earlier in 2019, he spoke at an event by Philip Morris International, the world’s biggest tobacco company.

Mr Sopel lives in Washington with his wife, but keeps a four-bedroom house in Hampstead worth more than £2million and a £1.2million flat in London’s Belsize Park.

Ms Husain moderated the event – which she has also been apart of at least five times previously – but it is not known how much she was paid.

However other BBC stars are listed on speaking agency websites as being able to charge between £10,000 and £25,000 to attend corporate events.

At the forum Ms Husain moderated discussions on topics such as ‘climate action in a world of cherished entitlements’. 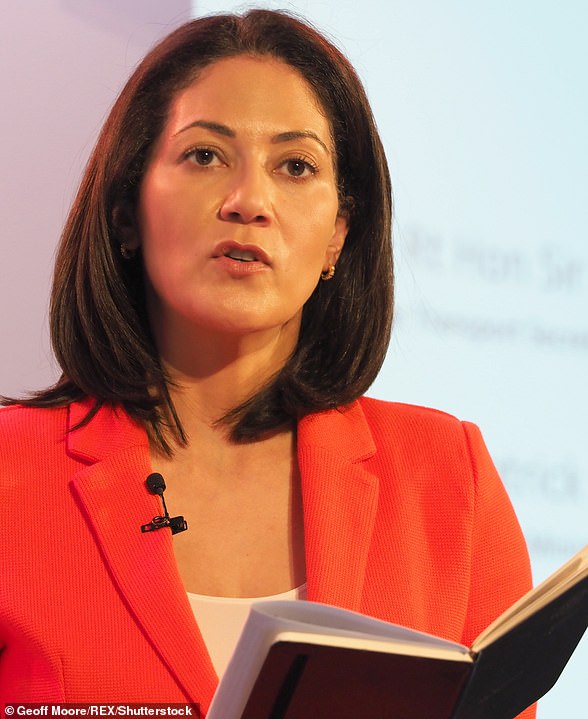 He is also thought to have hosted numerous other events over that period – but the BBC does not make the engagements public or keep a central register so the extent of his moonlighting work is unknown.

Mr Edwards does not tend to accept money from firms that could be a conflict of interest. He also undertakes charity events for free. However, he has fronted a series of events for railway firms, regional law societies and insurance brokers. 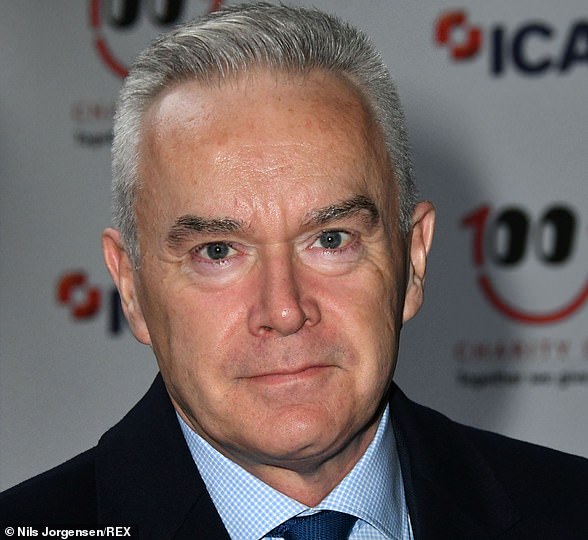 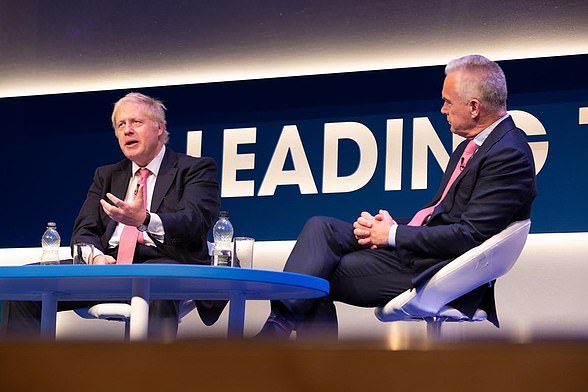 The News at Ten anchor fronted at least 16 events since the start of 2014, and commands fees of up to £25,000 a time. Pictured, Edwards hosting the British Insurance Brokers Association conference where Boris Johnson revealed his ambition to be Prime Minister

In 2019, he hosted the National Rail Awards in London and also fronted events for the Birmingham Law Society, the Women’s Institute and Thames Valley Business Magazine.

He also hosted the British Insurance Brokers Association conference where Boris Johnson revealed his ambition to be Prime Minister.

The BBC said that none of the events broke its impartiality rules.

The 34-year-old, who broadcasts to around 5.6 million listeners each Monday to Thursday, fronted a five-part series for Shell called The Great Travel Hack.

Sources close to the PR campaign claimed that James was paid £100,000 to feature in the videos, which have been watched 81 million times since Shell uploaded them to its YouTube channel last October. 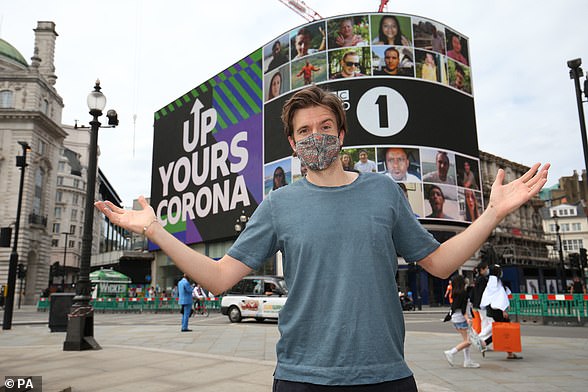 Radio 1 DJ Greg James (pictured in July promoting the Radio 1 ‘Up Yours Corona’ campaign), was paid £100,000 by oil giant Shell to front an online campaign which plugged the company’s ‘green’ credentials

KAMAL AHMED, £209,999-a-year BBC salary: In February, the editorial director of BBC News apologised for accepting a £12,000 payment for speaking at a banker’s conference, adding that he will not be taking any money from organisers.

Kamal Ahmed is understood to have received £12,000 for a 40-minute appearance at the Aberdeen Standard Investment’s conference, days after telling 450 of his colleagues that their jobs were being cut.

Ahmed – who is listed on the Speakers Associates website in the £10,000 to £25,000 per appearance category – took part in a panel discussion hosted by Steph McGovern, his former BBC colleague who now works for Channel 4.

He came under fire both publicly and within the BBC for his £12,000 fee for the event and subsequently sent an email to colleagues apologising. 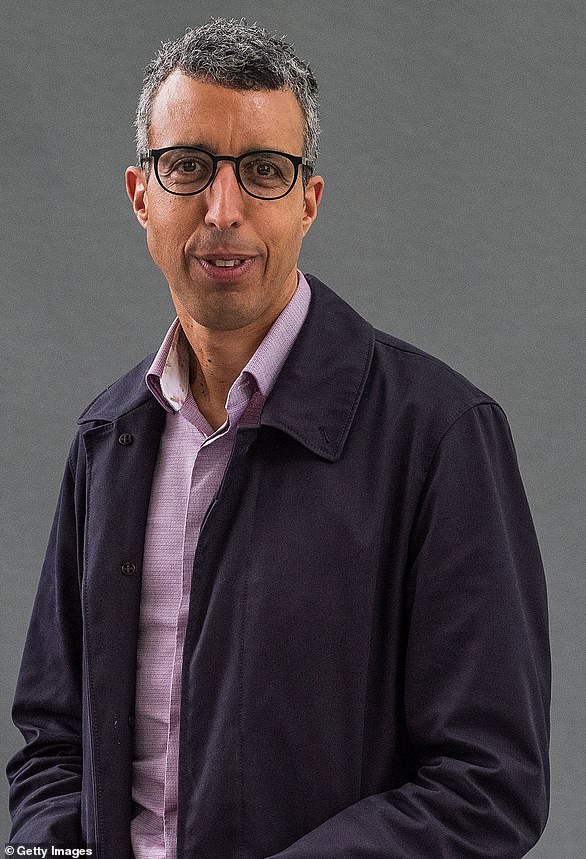 He is the previous Economics editor at the corporation.

He drew criticism after he turned up for the ‘bloodbath’ announcement wearing a black T-shirt and casual trousers. 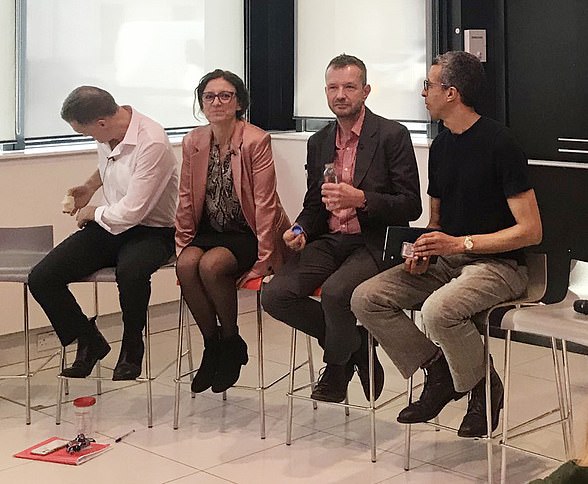 Ahmed was one of four senior BBC bosses who sat on bar stools as they announced the job cuts. He drew criticism after he turned up for the ‘bloodbath’ announcement wearing a black T-shirt and casual trousers. Pictured, BBC executives Gavin Allen (left), Naja Nielson (second from left), Jonathan Munro (second from right) and Kamal Ahmed (right) as they announced the cuts