A vicar captured the moment a thug decapitated a life-size model of Joseph in a nativity scene outside his church for the second time.

The scene depicting the birth of Christ has been repeatedly targeted by vandals since Reverend Danny Morrison and his wife Ari built it two weeks ago.

Within days of being erected, thieves snatches a doll of baby Jesus from the straw-lined crib at All Saints Church in Ipswich, Suffolk.

The head of Virgin Mary was hacked off last week and two days later Joseph was split in half and beheaded for the first time.

Reverend Morrison replaced the heads and installed CCTV with the help of a parishioner.

Just before 11pm on Tuesday, the hidden camera caught the moment a thug leapt into the camera shot and tore Joseph’s head off again. 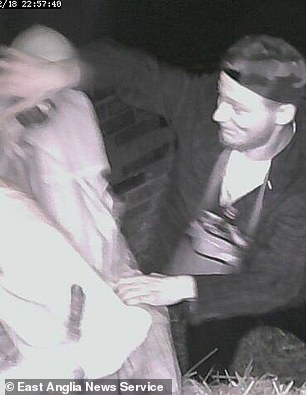 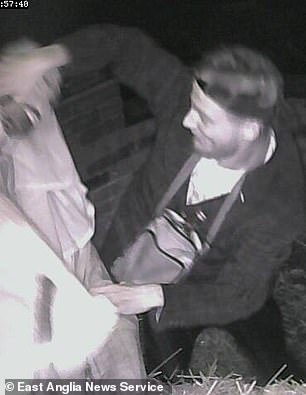 Video footage shows the capped thug ripping the head off the Joseph (pictured) which was on display outside All Saints Church in Ipswich, Suffolk

Police have handed the video and are now investigating the attacks.

Reverend Morrison has begged for the vandals to stop targeting the church’s Christmas decoration.

He added: ‘The church is here to be a bastion of light in the world. We are all here by the grace of God.

‘I have already forgiven those who did this, although it is a blasted nuisance.

‘We still think God will bless those who have tried to ruin it by causing damage. We have nothing against them, although I hope they stop.

‘My main concern is the amount of time it takes to keep carrying out repairs as we are really busy at this time of year.’

Reverend Morrison, who has been at the church for seven years, put the nativity scene on for the first time last year, making the heads of Mary and Joseph from wooden frames topped  by polystyrene sculptured heads

He said: ‘It was respected by everyone and we had no problems at all so we decided to put it up again this year.

‘When we were building it, people were stopping and taking pictures and selfies because they admired it. 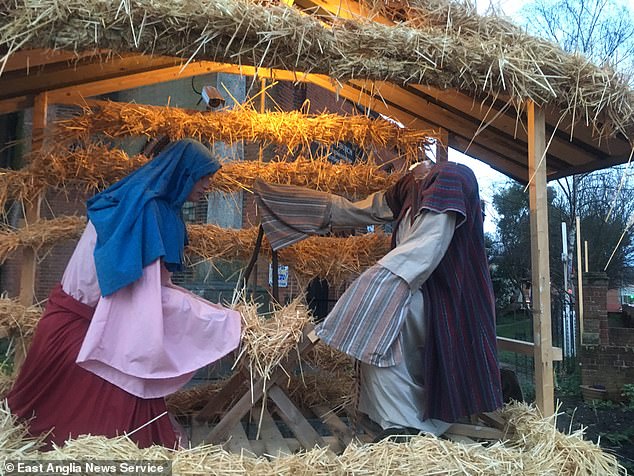 ‘But within a couple of days Jesus was swiped. When Mary lost her head, we hoped it had been blown off by a gust of wind – but it has been taken as well.

‘I am really sad about it. I don’t know who is responsible. It is just a shame.

‘We want to bless the community, so we made this as something nice and attractive for everyone.

‘I’m annoyed because my wife and I have so many things to do to prepare for Christmas, we could really do without this.’

Reverend Morrison has spent around £4 each time he has replaced the heads of the figurines, as well as spending time painting them.

But he has decided not to replace baby Jesus because a doll can be so easily snatched.

He added: ‘We wouldn’t risk putting Jesus out again for now, although we have had several local children who have kindly donated their baby dolls. 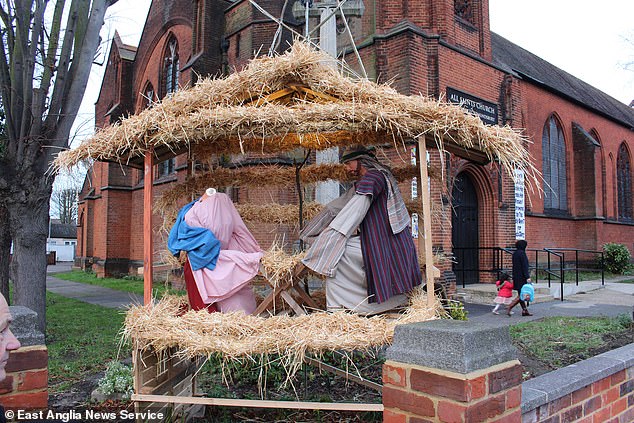 Reverend Morrison has spent around £4 each time he has replaced the heads of the figurines, as well as spending time painting them

‘It won’t put us off opening our church up to the community.. We want out gardens to be a place people come to sit and reflect, and that comes with a risk – but that’s the society that we live in.’

‘We were hoping to introduce some other characters like a shepherd or a lamb – but I am not sure now.’

Retired shop worker Carol Freeman, 73, who is in the church’s congregation said: ‘It is disgraceful and despicable. It really makes me angry. How can anyone do this at Christmas?

‘I am sure Danny and Ari will forgive them – but I don’t feel very forgiving. I know it is not a very Christian thing to say.

‘It makes me so upset because they put so much into it.’