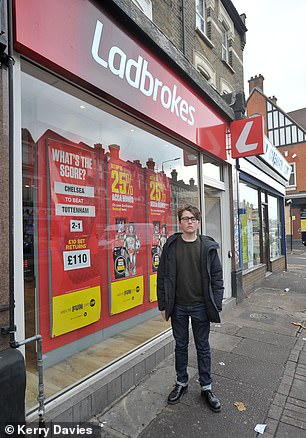 East Ham, London, on a cold, wet Friday at 4.35pm. The pavements are crowded with children on their way home from school, the Muslim faithful in traditional dress coming from Friday prayers, and commuters spilling out from the Tube.

Newham is one of London’s poorest areas, with more children living in poverty — almost 37,000 — than any other borough.

Money is scarce, yet like crocodiles at a waterhole the High Street betting industry lurks to snap up what is to spare — and indeed what is not.

Five years ago, local councillors claimed Newham High Street North had more bookmakers than any other in the country. There were 18 in total, and 80 in the borough as a whole.

They are very much a presence today and a magnet for those who can’t resist the siren call of the fixed-odds betting terminals which offer instant rewards, but in reality often cause misery because punters can lose up to £300 in a minute.

No other gaming machine has such high speeds or high stakes. Compared with the old-fashioned fruit machines, they are like a shot of crack cocaine.

Such is the capacity for addiction, and the rage sparked by sudden and heavy losses, that the Metropolitan Police have recorded hundreds of violent incidents — including assault — linked to these terminals, as well as suicides.

Which is why allowing under-age schoolchildren anywhere near them is so dangerous. Last month, a landmark Gambling Commission report revealed the number of problem gamblers aged 11 to 16 has quadrupled in two years to 55,000.

So just how rigorous are the betting companies in policing the age of their clients? To find out, I ventured into Newham, as well as other areas of London, with a 17-year-old named Tom.

Young for his age, he had never been in a betting shop before, nor tried to buy a drink in a pub. Both activities would be against the law because he is not yet 18.

In each betting shop, Tom would try to play the fixed-odd betting terminals (FOBTs). If he was allowed to do that unchallenged, we agreed he would then approach staff face-to-face and ask them to split a £10 or £20 note so he could gamble more.

The most startling — and disturbing — finding of our investigation is that of the three major chains that allowed him to bet, William Hill, Paddy Power and Ladbrokes Coral, it was the latter, Britain’s biggest High Street betting company, that was most lax.

Shockingly, in around two-thirds — 63pc — of the Ladbrokes premises our schoolboy visited, staff allowed him to play the FOBTs. In one instance, he lost £40 in five minutes.

Yet astonishingly, when confronted with our evidence, the betting industry’s representative body expressed concern not that the law forbidding under-age gambling had been breached, but that our investigation had been carried out at all.

At the first stop on our investigation, Ladbrokes on High Street North, close to East Ham Tube station, one wall is lined entirely with FOBTs. Tom walks in unchallenged. He takes a seat in front of a roulette-style game and begins to play. He is soon £7.20 up, but in just five spins loses the £20 stake he started with. 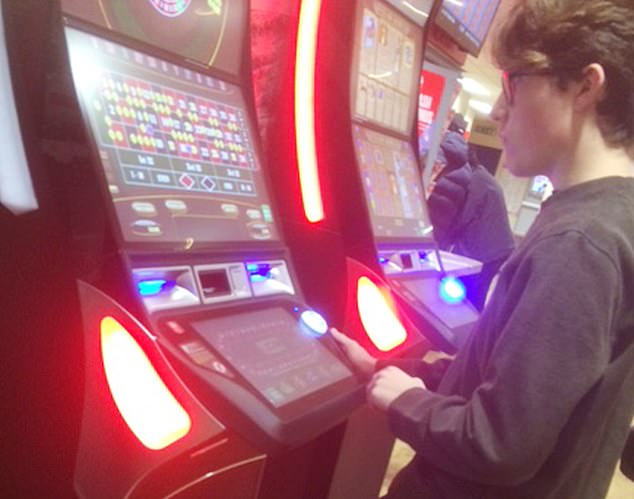 Young for his age, Tom had never been in a betting shop before, nor tried to buy a drink in a pub. He is seen inside the Ladbroke’s branch

Tom plays on uninterrupted, before making his presence felt to see if he is asked for ID.

‘Can you change this £20 into two tens?’ Tom asks the cashier. Yes, he can. And there’s no demand to see Tom’s ID. When we move to a second Ladbrokes on High Street North, Tom is stopped with a polite ‘excuse me, can I see your ID?’ from the female cashier. That is good practice, but five nights later at the Ladbrokes branch in Maddox Street, Mayfair, there is another egregious lapse.

The betting shop is almost empty, with two staff present — one of whom is on the phone — and Tom settles down to play a roulette-style FOBT.

Now, the pattern of what happens when you play these machines begins to emerge as Tom loses £10 in just one minute.

The danger for regular gamblers, and certainly children who do not have the maturity to control their impulses, is that they’ll chase losses by pushing more and more money into the machines.

Tom could keep playing unchallenged, but his money got wet in the rain, and the machines won’t accept his £20 notes. 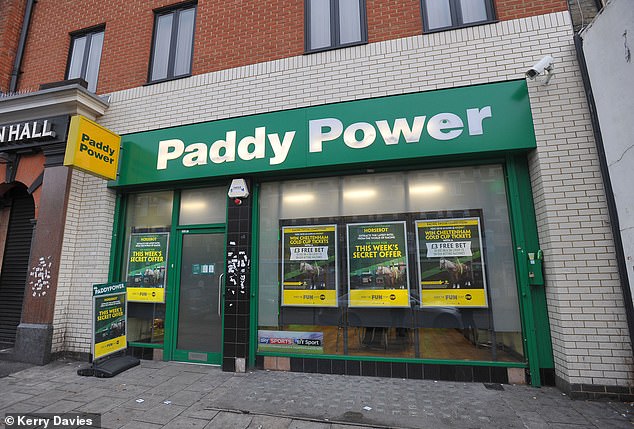 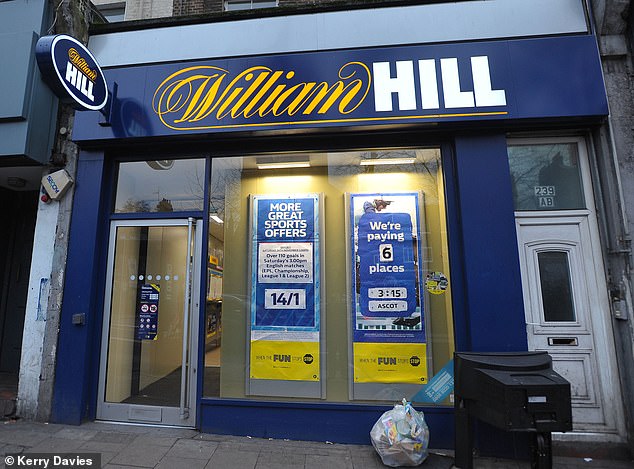 It’s only when he approaches staff to change the notes that he is challenged for his ID and then asked to leave.

Over in Argyll Street, opposite the London Palladium, we find a large, subterranean branch of Ladbrokes. It’s empty, save for two punters and two women behind the counter.

Tom strolls in and sits at a FOBT fruit machine in full view of the staff. Having won initially, he loses £40 in five minutes.

Eventually, he is approached by one of the women, but when he says he’s left his ID at home she allows him to continue playing.

Over in Hackney, there is another concentration of betting shops in Dalston Junction, a ward with high levels of poverty.

At Ladbrokes on the corner of Kingsland Road and Brighton Road, two female staff are chatting, while one sweeps up. Yet again, Tom is allowed to play and soon loses £10 on a roulette machine, then wins only £2 back.

It’s only when he goes to collect his winnings that a cashier says: ‘You look too young.’ He is asked for his ID and asked to leave. Neither his winnings nor what he lost are returned.

At two other nearby branches, Tom is spotted at once and asked to leave. But when we visit a Ladbrokes opposite King’s Cross station on another evening, Tom is ignored and can play a machine. 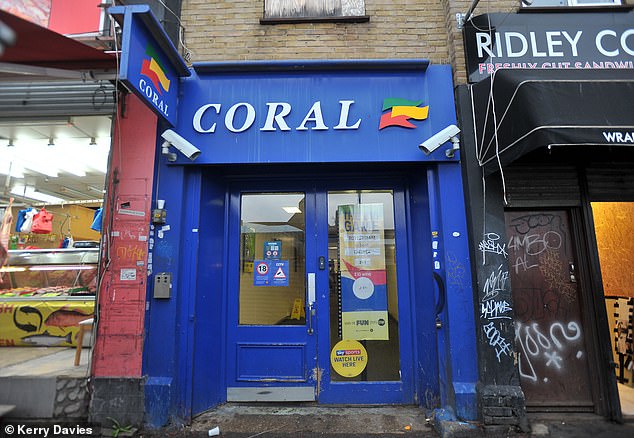 Neither of the branches of Coral (including this one, pictured) allowed Tom to gamble

The woman behind the counter is on the phone and no one pays attention to Tom. Only when he asks for a note to be split is he asked for ID. He has already lost £10 on roulette.

Last night, a Ladbrokes spokesman said: ‘We take the prevention of under-age gambling extremely seriously and have a number of robust policies and procedures in place. These include “Think 21” age verification training.

‘We continue to achieve industry-leading scores from the independent Serve Legal mystery shopping programme on under-age gambling checks. A full investigation is being carried out, including a review of the CCTV, training logs and interviewing the colleagues involved, to ensure we minimise these incidences in the future.’

During our investigation, we also visited six Paddy Power shops, two of which allowed Tom to bet. There is a busy branch opposite the Kingsland Centre in Hackney, with many fixed-odds machines. Tom walks in and plays a Luck Of The Irish machine, which could hardly be more unsuitably named.

He is soon up £4, but then loses £10 very quickly. A member of staff obligingly splits a £20 note for him so he can play some more. No ID is asked for. Fittingly, as this takes place, a horse called Reckless Lad wins the 6pm at Dundalk.

In another branch, on the corner of Plashet Grove, he plays Luck Of The Irish again. After a few spins, ‘I was down from £10 to 50p’. He is asked to leave only when he asks the staff to split a £10 note and admits he has no ID.

Of six William Hill shops we visit, one — on a corner facing King’s Cross station — allows Tom to play. This despite the fact it is small and almost empty.

He is able to gamble on two machines — one is Luck Of The Irish again. The counter staff also splits his £10 note so he can play more. We are not surprised when he loses his money again.

William Hill’s response? The company says it ‘commissions its own independent age testing and is subject to local authority and Gambling Commission testing’.

‘On all of these tests, the company scores highly compared to other age-restricted sectors. As recent Gambling Commission research showed, most under-age bets are private wagers or bets on fruit machines in pubs, because staff training and age verification standards in betting shops are high.’

We also visited three branches of BetFred and two of Coral, none of which allowed Tom to gamble.

In its statement to the Mail, the Association of British Bookmakers had the gall to say: ‘Unless the Daily Mail was accompanied by the police or the Gambling Commission, such survey activity was potentially illegal under sections 47 to 49 of the Gambling Act 2005.’

It continued: ‘As an industry we have zero tolerance of under-age gambling and invest more than £3 million each year in age verification testing, carried out by independent third-party organisations,.

‘All those results are reported to, and published by the Gambling Commission. All our members work to a “Think 21” policy.

‘Any cases where there is a breach will be fully investigated.’

Yesterday, when I described our experiences, the co-founders of the charity Gambling With Lives were horrified. In a joint statement, Liz and Charles Ritchie said: ‘Our son, Jack, tragically took his life due to a gambling addiction, which has deeply affected our family.

‘Crucially, he started gambling on FOBTs in betting shops in Sheffield while still at school, gambling with friends in the school lunch hour, under-age and unchallenged. Much stronger action is required to end illegal under-age gambling.’

Marc Etches, CEO of charity Gamble-Aware, said: ‘Whatever the circumstances, it is wrong that a child was able to enter a bookmakers’ shop and gamble.’

And Lord Chadlington, the Tory peer and campaigner against gambling, said in reaction to the Mail’s findings: ‘Protecting young people is absolutely essential.

‘Strict controls need to be in place, and a first step should be reducing the volume of advertising to which young people are exposed, to avoid them being encouraged to gamble from a young age.’

The fixed-odds terminals in particular are a money-spinner. There are 8,406 betting shops across Great Britain, most of which have FOBTs, each generating an average of £50,000 in annual revenue.

In May, the government announced the maximum amount which could be staked on a FOBT would be slashed to £2 — but not until next autumn, a delay which saw Tracey Crouch, Minister for Sport and Civil Society, resign on principle. The reduction has since been brought forward to April.

So what did our under-age gambler — who lost around £120 during his visits to the betting shops — make of his experience?

Tom says: ‘While I was losing on the fixed-odds terminals, I struggled to understand what the appeal was.

‘But as I started to win — and I don’t mean a couple of pounds here and there, but tens and twenties — I started to become increasingly reckless, betting more and more and, crucially, continuing to bet after I had repeatedly lost.

‘That’s when I understood why people become addicted to betting — and to these machines in particular.’

It is a devastating message, and one that the Government, and the betting companies that rake in so many millions a year, would do well to heed.