Two police officers and three security guards were injured during a brawl outside a hospital in Melbourne’s north, which allegedly broke out after three men were refused entry to see a patient .

A Victoria Police spokesman said about 15 people had gathered outside the Epping hospital when the three men tried to go inside to see the patient just after midnight on Monday. 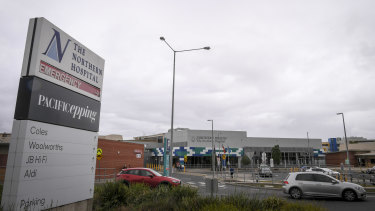 Police and security guards were injured during a brawl outside the Northern Hospital in Epping.Credit:Eddie Jim

The Age understands the patient was a man who had died with COVID-19.

Police allege hospital staff asked the men to leave, and a fight then broke out.

They were granted bail to appear at the Heidelberg Magistrates Court on February 28 next year.

A Northern Health spokesman said: “There was an incident early Monday morning at Northern Hospital Epping, where a number of family members attempting to access the hospital exhibited unacceptable behaviour.”

The Northern Health spokesman said Victoria Police attended and were dealing with the matter.